Best Women’s Erotica 2010 appeals to men too, according to this great review in Calgary Life and Style 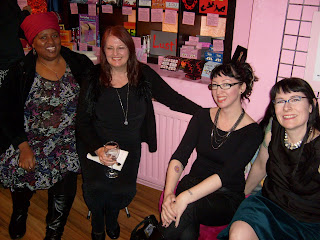 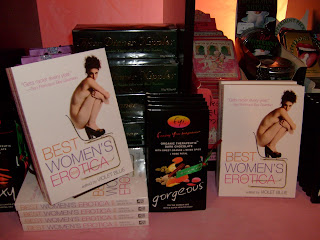 Remember when you were an adolescent, always skipping to the naughty parts in every book, a book you probably weren’t supposed to be reading in the first place. Actually, it was always easy to find the naughty parts because the books, any book any adolescent ever had hold of, would always just fall open to those bits from frequent perusing, if you get my meaning.
Imagine a whole book of nothing but naughty parts! Wow! Does it get any better?
That was pretty much the theme of Friday night at Sh! Women’s Store, where our amazing editor, Violet Blue, my sisters in erotica, Jacqueline Applebee and Scarlet French got to read nothing but the best bits from Cleis Books Best Women’s Erotica 2010, and Jaquie gave us a delicious taste of The Best of The Best Women’s Erotica 2, to be released in February. As you probably suspected, Women’s Best Erotica 2010 is a best bits only sort of read. The four of us, along with a very enthusiastic audience gathered in Sh! to drink pink fizz, eat cupcakes and be titillated by story. It was bliss!
Renee and Joanna and the lovely women at Sh! were hostesses extraordinaire, and I had to be practically shoved out the door at the end of the evening because it was such a great place to be. Sh! is definitely the place to find that perfect naughty gift for someone nice. (Personally I’d recommend a copy of WBE 2010 for starters.) I was occupied reading and drinking fizz Friday night, but I’ll be back with shopping list in hand.
Don’t be too disappointed if you missed it. Plans are already in the works for another reading of the best bits in March, with Best of the Best Women’s Erotica on the menu.

Wow! Check this out from Scarlett French. Am I going to be in amazing company or what?!

“Are you already sick of ‘Jingle Bells’? Fancy a bit of subversion to make you feel normal?

Jacqueline Applebee will give us a little taster of Best of Best Women’s Erotica, due out early next year.

I once sat through a reading of four fairly well-known romance writers, who had great stage presence, read beautifully from their new best sellers, and answered the audience’s questions with the level of expertise one would expect from people who make their living as writers. That is until they were asked about writing sex.

There was a frisson of embarrassment across the stage and a lot of shifting and shuffling and throat clearing as all four made excuses for why they were uncomfortable writing sex and therefore didn’t do it if they could avoid it. Then the question was dismissed with all the gravity a question about the proper shade of lippy might have been.

I wanted to shout, ‘This is sex! It’s the biggie! It’s what romance leads to! It’s what made us all! Beyond the shouting, sex is the powerful leveler of persons that strips us of our facades and brings us down to the deepest part of ourselves, and occasionally the best part. It exposes our animal nature with all its crudeness and all its charm. Sex is one of the best ways for a reader to get to know a character. With that in mind, I can’t imagine why all writers aren’t dying to write their next sex scene.

I appreciate a good sex scene in a novel – any novel – because sex in fiction, no matter how dangerous, is always safe sex. I enjoy writing erotica because it allows me, and my reader, to experience sex vicariously, safely, in ways we would never experience it in the real world. In some cases it’s only to see what the appeal of being there is. In other cases it’s the fulfillment of fantasy on the written page done safely without leaving the comfort of the recliner. For me, as writer and reader, there’s also the added excitement of sharing fantasies with total strangers.

I’m told I don’t look like the type of woman who would write erotica, but the more I write, the more I wonder why the type of woman who writes erotica shouldn’t be Everywoman. We all have fantasies, and I can speak first hand as to how hot it is to write those fantasies down – in detail. No one needs to read them but ourselves. Hey, it’s a cheap sex toy – a piece of paper and a pen – a hot pink one, maybe??? It’s safe sex at its best. The world of the written page has always allowed us to walk in other dimensions, other realities, other times, and to see the world through the eyes of other people. Why shouldn’t sex be included in those other realities?

Coming home from the States on a night flight a couple of weeks ago, unable to sleep, I found myself watching the film, The Ugly Truth, with Gerard Butler and Katherine Heigle. Butler’s character is trying to help Heigle’s character develop a relationship with a hot doctor. He asks her how often she masturbates. Horrified, she says she doesn’t do that sort of thing, to which he replies, ‘If you don’t want to make love to yourself, what makes you think anyone else will want to?’

According to Wallace Shawn, “Sex really is a nation of its own. Those whose allegiance is given to sex at a certain moment withdraw their loyalty temporarily from other powers. It’s a symbol of the possibility that we might all defect for one reason or another from the obedient columns in which we march.”

I’ll admit it; I’m a defector to that nation of sex. It’s a large nation with lots of room, and I’m inviting everyone I know to defect and enjoy.

The Initiation of Ms Holly

It’s finally happened! Xcite Books is publishing my hot novel, The Initiation of Ms Holly, in October 2010! I know it’s a long wait, but it’ll be worth the wait. In the meantime, you can look forward to sex on a train, sex on a Harley, sex in leather and stilletos with a bit of mythology thrown in for good measure. And love. Let’s not forget the best part! http://www.booktrade.info/index.php/showarticle/24187