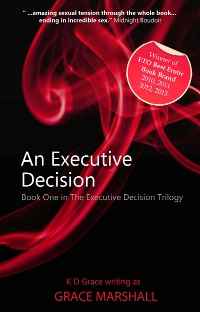 Sex in the contract – it’s the only way super-focused, over-worked CEO, Ellison Thorne, is ever going to get laid. That’s what his retiring business partner and secret match-maker, Beverly Neumann, thinks. She’s convinced no-strings, stress-free sex in certain employee contracts would raise productivity and minimize stress — perfect for a busy executive like Ellis. But she’s joking, right?

Enter her hand-picked replacement, Dee Henning. Young, hungry, gifted, Dee is the queen of no time for sex. When negotiations on a major project break down, and Dee and Ellis end up in each other’s arms, the Executive Sex Clause suddenly becomes more than a joke. In fact hot executive sex just might be the ultimate secret weapon for success. But secrets seldom remain secret, and Dee and Ellis soon learn there’s no such thing as no-strings where the heart is concerned.

“If you like a really good romance, with a plot that twists and turns, with tension and sizzling sex scenes, then An Executive Decision is a must read.” Kay Jaybee

“Lots of conflicts, emotions, and differing goals that need to come together, but it is well done. Pretty good sex, too!” 4 out of 5, Manic Readers

“I absolutely loved the storyline, thought it was very original and well-developed. If you are looking for a HOT romance that you won’t be able to put down, look no further, An Executive Decision is your next read!” 5 out of 5, Flirty and Dirty Book Blog

“I enjoyed this fast-paced, action and emotion-filled book from cover to cover… The author wrote an intriguing story with a concept I am sure more than one executive would be willing to put into action. Beware! The law of attraction grabs fast and it grabs hard, so grab a glass of good wine and hang on for the ride. Better grab the bottle while you’re at it.” My Life. One Story at a Time

“I had high expectations for Grace Marshall and I am pleased to report that she met them. I can see why she is popular; her writing is just that good!” 4 out of 5, Thoughts of a Growing Sub

“An Executive Decision is a brilliant first novel from Grace Marshall. The storyline has a great blend between the romance and the other plot elements, and each of the elements combines to make this a real page-turner. Despite its whopping word count, I whizzed through this in a couple of days, and am looking forward to the next book.” Erotica For All

“I really like this book. Once I started reading, it was hard to put down. The story-line was intriguing and I wanted to find out what was going to happen next. There are more than a few steamy scenes, so have some ice on hand. If you want a steamy office romance this is just the book for you.” 4 out of 5, The Jeep Diva

“I couldn’t put this book down, I read through it in one day… I’ve already purchased the next book in the three book series “Identity Crisis” and can’t wait to dive in head first to Garrett and Kendra’s story, and I can only guess at what the last book in the saga will bring… but I’ll be chomping at the bit to get to that one too.” 4 out of 5, Rom Fan Reviews

“This is a must read romance novel. Ms. Marshall is an excellent writer who infuses her stories with strong emotions. This sexy sweet romance novel is highly recommended to those who enjoy a good plot and great characters.” 4 out of 5, La Crimson Femme

“…I adored Executive Decision. I loved the journey of Ellis and Dee….watching their love story unfold was just so much fun to see, even if it seemed like there were so many outside factors pulling them apart. Executive Decision is book one in a three part series and I can’t wait to get my hands on the next story!” The SubClub Books

“The characters were well thought out and had their own distinct personalities that just made you fall in love with them… burned holes in my screen… executed with style… Kudos Ms Marshall, and I look forward to reading the other two books in this trilogy and hope that you have set the bar for them.” 5 out of 5, Blood, Lust and Erotica