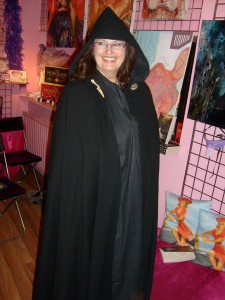 There are several things I really love about a book launch party, and that’s why I never miss the opportunity to have one. First of all, I’ve been very lucky enough to have all of my launch parties at Sh! Women’s Store, and any opportunity to spend time at Sh! amid all the nasty, sexy loveliness in the company of the wonderful Sh! Ladiez is time well spent. Second, a launch party is a chance for me to see friends that I don’t get to see very often: writing friends, who are as happy to sit around and talk writing and smut as I am, and reading friends, who have read the last book and are excited to read the next one. Ultimately, I guess there’s really only one reason why I’m such a fan of launch parties, and that’s because it’s time spent celebrating with friends.  And celebrating with friends is always a good thing. 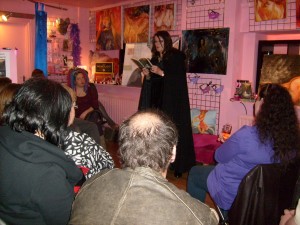 Reading in the cape, my body temperature was was definitely rising.

always has a fair amount of people who, after the party, will be on my ‘friends’ list, and I’m not talking just Facebook either. Every launch party has people that I didn’t know before, people who have made my life richer by their acquaintance. 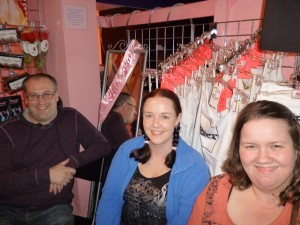 The Northern Birds, Lucy Felthouse and Victoria Blisse, along with Lucy's OH, Ian

Since Fiori, one of the witches in my novel, is a gourmet cook who would never allow anyone into her home without some homemade goodie to accompany tea or coffee, I channelled Fiori for this occasion. Mind you this is something that will probably NEVER happen again. Cooking magic is NOT my forte. But for this occasion I made cookies, complete with love spells, contentment spells and prosperity spells. I knew what spells were on my cookies, but when the lovely Victoria Blisse, accompanied by the fabulously formidable Kevin Mitnik, arrived with MORE lovely chocolately cookies, and Ian, Lucy Felthouse’s wonderful Other Half arrived with yummy pink fudge, well, I wasn’t sure what kind of spells they put on their treats, but let’s just say I did see a couple of formidable vibes being sold upstairs to customers with huge smiles on their faces, and there was lots of laugher and good cheer, so I have a feeling there was some serious magic going on all around.

I’ve never dressed the part before, but then I’ve never written about witches and magic before, so I decided to suit up in a cape. This cape, however, was designed for outdoor magic in a British winter, not a Sh! Women’s store already heated to body temperature and rising. Nevertheless, I wore it for the first reading, feeling a bit like I was wearing a black wool garden shed on my shoulders. Still, it set the tone for a witchy, magical evening with old friends, smutty friends, new friends, Sh! friends and Oooooh yes, did I mention artist friends? 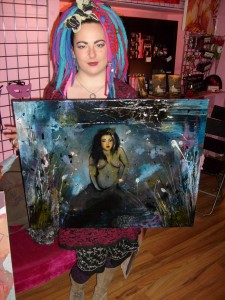 Fuschia Ayling's interpretation of the opening scenes of BTR; lost on the fells

One of the most magical parts of the evening actually began several weeks ago at the Fannies Rule group ran by my dear friend Sarah Berry. That evening Sarah had three lovely young artists, whose work was on exhibit over at Sh! Portobello. That marvellous combination of sex and art, whether visual or written is in itself magic. All of us smutters already know it, so it was wonderful to meet visual artists who know it too. I was completely delighted when they asked if they could illustrate scenes from Body Temperature and Rising for the book launch. Just thinking about combining the imaginative works of these three artists with my story gave me goose bumps. I’m not sure they got the offer completely out of their mouths before I was jumping all over them with my yes, yes, yes!

The next day I sent them the text from the scenes I planned to read, and they each chose a scene to 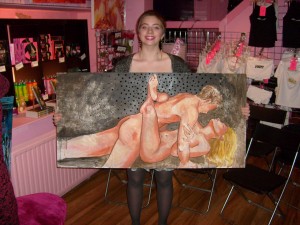 illustrate. Fuschia Ayling, one of the artists, was kind enough to post the progress of her work for the launch on her blog. Every time she posted, I could hardly contain my excitement. They had all three chosen one of my favourite scenes from BTR, which made me all the more excited. I also saw, on Fuschia’s website, a sneak peak of Shay Briscoe’s painting that gave me goose bumps. Shay had captured the feel of magic so well. Jess Pritchard, the third lovely artist, however, kept her offering as a surprise. And wow! What a surprise it was! Speaking of magic. Imagine my delight when I arrived at Sh! to find these three lovelies had dragged their art all across London on public transport, and the tube to get it there for the launch! No small feat because these were not small pieces of art. (I’ll be chatting more with these three talented people on my blog at a later date.)

It was, indeed an evening of magic, and their powerful paintings made it even more so. When the lovely Jo introduced me and I made my grand 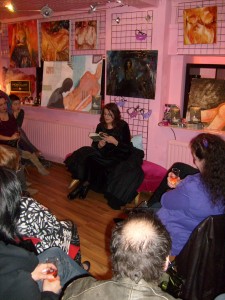 ... and then there was a ghost and a witch and a farmer and a chick from the States and ... sex!

entrance in my garden shed black cape, and stood reading amid the three works of art that set the scene so perfectly, I felt transported to the Lakeland Fells, to an abandon slate quarry, to a farmhouse in front of a fire. It was like being in my own imagination, and the imaginations of the artists at the same time. 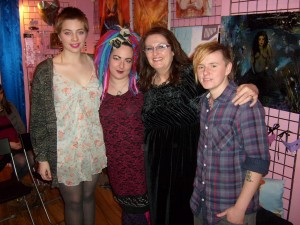 My wonderful new friends celebrated with my lovely writing friends, of whom there were a good many, some who had done everything but chop a path through the wilderness with machetes to get to Hoxton from Chrystal Palace. Victoria Blisse and Lucy Felthouse represented the Northern Birds. Kay Jaybee made her way up from the southwest. Lexie Bay and the fabulous Doug made it from out of town as well. Also present were the fabulous Rebecca Bond, and the delicious Meg Philip. Meg seemed well recovered from her spanking at the hands of the Enforcer, Kay Jaybee, at the Reading Slam the night before. Though I think Meg might have been a bit disappointed that Kay was in a milder, non-spanking mood at the launch. That could have been from the contentment spells on the cookies. To my delight, poet extraordinaire, Mel Jones was also there. Even without the spells on the cookies, Sh! 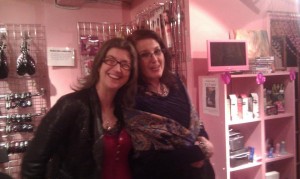 Kay Jaybee and me, taken by Rebecca Bond

was filled with creative magic, artists, poets, cooks, writers, and people who just flat out love to celebrate sexuality and the written word. All in all, it was exactly the perfect spell for a good time.

As the party spilled out into the streets, fourteen of us ended up over at Byron for a late snack and more magic, already planning and scheming the next excuse to get together and celebrate. As the pressure of public transport pushed us out onto Old Street, which was its own hive of night time celebration, we said our goodbyes to all except Lexie Bay and Doug, who joined Raymond and me for a quiet drink in the lounge at our hotel, talking writing and smut and … writing. Nothing means more to a smutter than the proud support of her Sweetie. And I can’t say enough good about the support we get 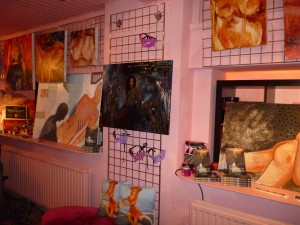 In fact, we talked writing and smut so much that Lexie and Doug missed their last tube train and had to walk through the wilds of London to catch the night bus home. My friends rock! All of them, the old and the new. At the end of the night, I think I was the recipient of the biggest happiness spell of all. At least it certainly felt that way. In fact, I still can’t wipe the smile off my face when I think about all the fun and magic of this past weekend. I’m already hard at work on book two!

6 Responses to “Body Temperature and Rising — a Positively Witchy Launch”