Apoligies from the photo staff: for the lack of pictures of the event. Without my trusty hubby there to egg on and facilitate picture taking, I sometimes get caught up in the event and forget. Sadly, or happily, depending on how you look at it, this was one of those times. So you get mostly WORD pictures. Those I’m better at.

I love writing conferences! I’ve never been to one in which I’ve not had a wonderful time and walked away enriched by the experience. The very first ever, long awaited Eroticon, which took place Saturday in Bristol, was no exception. It was the first, but I’m sure all of us who attended are hoping it won’t be the last.

I met Ruby Kiddell in Las Vegas at the EAA Conference last September. Little did I know what that event would set in motion, for the lovely, creative Ruby. Six months later, the woman had somehow, almost as if by magic, put together an amazing event in an amazing city, with amazing guest speakers attended by amazing folks who like to write sexy amazing stuff – online or in story.

For me, the event really started on Friday when I hopped the train to Bristol, my head still spinning with the final details of Riding the Ether. I arrived in Bristol early afternoon and took a taxi to the hotel room. The day was sunny and bright and the air was filled with the promise of spring, which was enough to drive me into the streets, as soon as I was settled in the hotel room, to take in the city. I suppose it’s the walking genes, but I’m a firm believer that in order to really know the soul of a place, it has to be explored with soles – one foot at a time.

I walked in the sunshine along the waterfront. A busker played an accordion and gulls called overhead. My first priority was to find Armada House, where Eroticon was to take place the next day. It was an easy ten minute walk, even playing the shutter-snapping tourist. Once I was sure of the route to the venue, I explored College Green with its fountains and Cathedral, and then walked down past Queens Square, where the first blackbird I’d heard for the season seriously sang from a nearby tree. Back at the waterfront, I settled in for a pint and a salad for dinner while I worked on the read-thru for Ether.

The next day, I arrived early in typical KD fashion, never wanting to miss anything. I’d barely gotten in the door before I met the lovely Jilly 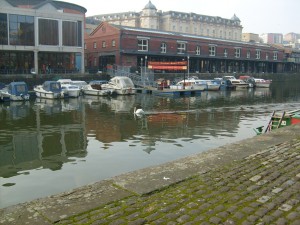 Boyd, whom I only knew online. Just then Janine Ashbless arrived. What a delight to see her two weekends in a row. She was followed shortly by Kay Jaybee, Lucy Felthouse and Victoria Blisse. When Rebecca Bond showed up, it felt a bit like a reunion from last week. And there was a whole room full of new people to meet and old friends to get reacquainted with.

After Danish and coffee and a chance to network, the day began with panels, classes, and discussions enough to spoil us for choice (link to courses) The only real problem was that it was impossible to be in two places at once.

The first panel was Identity Ethics and Sex Blogging, which was full of thought provoking insights. Though my blog is not a sex blog, most of what was said and discussed on the panel resonated with anyone who writes sex, whether it’s self-help, personal experience, poetry or fiction.

One of the most eye-opening statements came from Zoe Margolis, AKA Girl with a One Track Mind, who said. ‘It’s a sad state of affairs that we can’t be open about sex. Outside this room, people would think what we’re doing is saucy, perverted.’

I was stunned. I write erotica and surround myself with others who also write erotica and people who are comfortable with their own sexuality and allowing others the space to explore theirs. But Zoe’s statement was a powerful reminder of what we’re up against, as bloggers and authors, and what needs to change before sexuality can be embraced and celebrated for the important part of the human experience that it is. 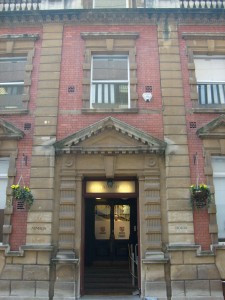 Scarlett French, who later led a course of her own called, ‘Taking your writing beyond the page,’ asked the thought-provoking question: Do we perpetuate the segmenting and separating of sex from the rest of life by blogging under a pseudonym?

The answer was a resounding yes, but sadly there didn’t seem to be a real solution for the problem.

I don’t have the time nor space to talk about all the panels and workshops, however, I felt that the first panel set the tone for the rest of the day and was so full of food for thought that it alone would have made the day worth it. Please check the link for more details on the events and for some wonderful posts from the participants. And there were so many fabulous people there. I could name-drop all day.

Another fabulous encounter, for me, happened when my lovely, publisher, Hazel Cushion, from Xcite Books, who was there for the panel of publishers, quietly directed me to the Lovehoney Sex Toys booth to meet the wonderful, Alice Little in her sassy cherry-print frock. Lovehoney sells and promotes my novels, and Alice is a fan of The Initiation of Ms Holly. Lovehoney have been fabulous supporters and seriously good sales rep for my work. It was a pleasure to meet the people behind the lovely toys and equally lovely book sales. Joined by my dear friend and fab author, Kay Jaybee, we talked writing and books and sex toys. Lovehoney were one of the sponsors of the event, and Alice was very happy to talk us through the range that Lovehoney had brought to display. I’ll be placing an order …

We spent a happy few minutes thumbing through the amazing prints of fabulous photographer, John Tisbury, chatting with Jade Whisk about stories the prints sparked for us and the pitfalls of getting published. After that, I split the next session between the Northern Birds, Lucy Felthouse and Victoria Blisse, who were running a workshop on promoting, marketing and blog tours, which was, in typical Felthouse /Blisse fashion, informative, sassy and fun. Then I rushed downstairs to catch the second half of the panel on blogging and the press.

The evening was topped off by a stunning demonstration of spanking by London Faerie and Lori Smith of Bitch Buzz, and a gorgeous burlesque performance. Sadly, for all of us authors, who came prepared to read, there was not enough time for the readings. Too many wonderful events, not enough time. 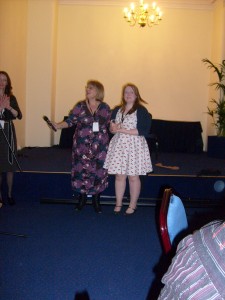 burgers and chips and much conversation about – you guessed it – writing and sex, we all headed to our respective hotels. As it turned out Lily Harlem, Victoria Blisse and Lucy Felthouse were staying in the same hotel as I was, and Josephine Miles had an hour to kill before catching her taxi to the train station. AND our hotel had a quiet bar.

Five smutters, a good supply of drinks, alcoholic and otherwise, and as you can imagine, it was filth time! By the end of the evening we had schemed future anthologies, nasty stories, and had filthy discussions of the ones that got away and how glad we were they did. Oh, and did I mention, we talked writing? As fabulous as the event was, what these events do that’s the very best part for me, is give writers, who are by nature, solitary creatures, who seldom come out of their caves unless they HAVE to, a chance to celebrate their craft with other writers. I know, I know, it’s called networking, but that word is so business-like and cold. I’m kind of toying with the word smutworking. When sex writers get together, it’s not so much about what we can do for each other. It’s more about a common experience shared and made somehow deeper and more celebratory for the being shared by a bunch of introverts. 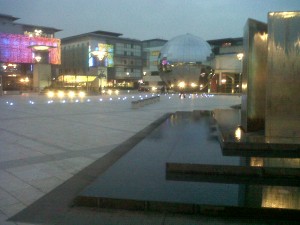 The view across the square to our hotel, where much creative smuttery happened

I had quality time with fabulous people – some who were my heroes before I spent time with them, and many who certainly were AFTER. Gathering for a weekend with other sex writers, whether it’s fiction, non-fiction, or blogging, makes me realize just how important what we do is. Sex writers are at the forefront of the boundary pushing that needs to happen for sexuality to stop being the nasty that’s hush-hush and separate from the rest of the human experience and become the vibrant, integrated celebration and perpetuator of life that it truly is. We’ve got our work cut out for us, but wow, are we in good company!