Hello Everyone! Rose Caraway here. Thanks so much, KD for letting me come out and howl with you. Today I have a little scene that I’d like to share. It is a scene taken from my Erotic/Horror novel, WOLF. I know, I am all about the erotica, but as Halloween is so close I can taste it… I felt it best to celebrate by offering a little sample of something spine-tingling.

WOLF is my first full-length novel and current WIP. I began it last year for NaNoWriMo and have been slowly pecking away at it. This book couldn’t possibly be written in a single month. I expect it to be ready for beta-readers by mid-2015, (fingers crossed!).

Okay, since it is nearly Halloween let’s talk about fears. So, what am I most afraid of? Spiders make me jump. Heights terrify me. But, honestly, it’s the being alone thing that is the worst. I think it could very well be my kryptonite. Of course I enjoy me time whenever I can, but I have the security of knowing that there are four other people living with me. If I were all alone I just might go a little “Renfield”, without the eating of the spiders thing, of course! Because eww!

So, in WOLF my sweet Virginia is stuck with this very fear gnawing away at her brain, day by day. She’s trying to keep herself together for the sake of her older sister, Elise, who is dying. The death clock is ticking and Virginia feels like she is the one running out of time. Between handling the family business, taking care of her sister, teaching 6th grade—there is no personal time to spare. No boyfriends, no casual dates, unless you count the school principle who keeps hitting on her.

This scene I am posting here is the very last scene in Chapter One. It is titled; Alone. I am going to go ahead and leave you here, all by yourself, lying on the side of a winding road deep in the Colorado Mountains with Virginia. It is about nine in the evening and she is just coming to after being bitten by one of the wolves… 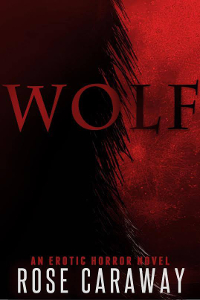 A pyre pulsing up her arm.

Jointed warmth webbed around her cerebellum.

Virginia opened her eyes, awake and attuned to a new crystalline night. Before she put thought into action, she cataloged her surroundings, knew them. She was lying on the cold ground, breathing in the distinct mineral-mulch scent of earth at her cheek. Her nose took stock of her surroundings. The breeze that combed through the ancient aspen colonies covering the mountainside brought with it the rejuvenating scents of pine, spruce and fir. The wind also delivered the caustic acrid scent of rubber—the Audi’s tires, about twenty feet from where she lay. An oily, actinic signature that coated her tongue.

As she lifted her head from the ground she heard the unmistakable sound of an owl’s wings, beating—no echoing against the air as it flew away. In her mind’s eye she saw with perfect clarity that as it flew away from the cliff and over the quarry, it’s meal; a furry morsel, struggled feebly until the owl’s sharp talons embedded themselves into the tiny creatures soft belly. Virginia detected the faint, sweet metallic scent of mouse blood.

She shook her head, sat upright and paid dearly for it. Her vivid night-world swooned as blood rushed to her head, disorienting her. She groaned and then held her breath. Remembering suddenly why she lying on the road in the first place. Wolves! She scanned her surroundings. Nothing hairy lay crouched in wait for her. Though her rational mind knew it was impossible, she imagined that she could just catch their fading canine scents still lingering in the air. One scent belonged to a female, which she curiously detested. The other—the other was male and for the briefest of seconds she rather liked the virility of it. She wiped the cold sweat from her grit-covered brow and peered deeper into the shadowed tree-line across the moon-lit road. For several breathless moments she concentrated. Her eyes bulged with the effort. There were no monsters cloaked in the blackness. She dusted her hands together and suddenly remembered her arm and the long gleaming teeth that had sunk into her delicate flesh. Holding her arm up to the moon’s light, she saw that the sweater’s sleeve was shredded beyond repair and stained dark red. She swallowed. The sickly scent of her own blood caused her to wrinkle her nose as she slowly pulled back the tattered fabric to see how bad her injuries were. There was no gaping flesh, no carnage, the only evidence of the attack; a few long dark lines— scars. “What? But how? I felt it… there was blood!” her voice was a shrill whisper that bordered on hysteria.

It had to be because of shock. Shaking, sweating, unable to think clearly, all symptoms of her recent attack. She couldn’t possibly know for sure if anything out there might actually be stalking her. Yet, as she looked around once more, some part of her felt certain of it. She licked her lips and continued counting off symptoms. Loss of blood, exposure… that had to explain it. But there weren’t any gashes. Nothing but scars! Had she imagined everything, then? She couldn’t have, her sweater was shredded and stained. Even in the darkness she could tell that it was blood all over her sleeve. Hell, she could smell the heady metallic scent of it! Her stomach rolled when she could feel herself almost falling off the cliff again. Then the sight of the wolf’s head as it loomed over the edge, the moon behind it accentuating its shape, and the teeth that bit and tore into her arm and then dragged her back up—it was real.

Clutching her arm to her chest more out of the need to be consoled than anything, Virginia gathered her feet beneath her. She took a breath and then mentally counted.

She sprinted, helter-skelter, her heals on fire as she imagined that she was wrong. That she wasn’t alone on the mountain road. That the shadows themselves were hungry wolves wanting to finish the job.

Her white tennis shoes slid on the gravel road, crunching too loudly in her ears. It felt like she was moving in slow-motion toward her Audi. It took ages before her fingers curled around the door’s trigger handle, swung it open, got in and then slammed it shut and shoved the locks down. Her heavy breaths were loud. The tangy scent of adrenaline—fear—filled the car. Her head jerked left then right as she checked each window, verified that nothing was barreling after her, ready to devour her.

Relief washed over her skin and tears of exhaustion blurred her vision. Trembling, she reached for the key, and her fingers felt the empty ignition slot. Her scalp tightened, her palms became damp.

“God damn it!” she pounded the steering wheel. “Why?”

The keys were somewhere out there on the ground still.

“God damn it,” there was no way that she was going to leave the safety of her car and search for her keys. She had no recollection of which way she’d even flung them.

Helplessness settled into Virginia’s bones with a heavy silence. If she’d only remembered her phone, then she could call a tow truck.

The tears flowed until exhaustion closed her puffy eyes. Virginia fell asleep in the driver’s seat. 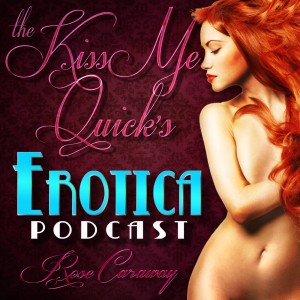 Rose Caraway is a native Northern California writer, editor, blogger, narrator, audio book producer and podcaster for the hit show “The Kiss Me Quick’s” Erotica Podcast. She freely celebrates all things erotica with her wonderful Lurid Listeners and is fondly know as “The Sexy Librarian” who scours the globe searching for more sexy stories for her fans, which includes inviting many of today’s most influential erotica authors to guest write for her show.

You might also find Rose Caraway over at her newest hit podcast, “The Sexy Librarian’s Blog-cast” where she not only discussing her own journey in writing and her latest audio book projects, she also interviews and gets to know some of her favorite erotica authors, fellow narrators and anyone else interested in just hanging out for fun and engaging conversation, while along the way, offering helpful tips of the trade to aspiring writers. “The Sexy Librarian’s Blog-Cast” is a new way to get know Rose Caraway and her amazing friends!

Rose’s writings have always prominently showcased her sex-positive approach to life, as well as shown her commitment to both feminism and masculinism. Being a staunch supporter of the LGBT community, she believes that people of all genders and orientations should be considered complementary and interdependent and are necessary for a truly healthy and functional society.

In addition to writing, Rose’s other passions revolve around her soul mate, Big Daddy, her three beautiful children, her dogs and her avid erotica reading tortoise–Spike. Rose keeps an active lifestyle and has a deep love of music and its many incarnations. She is immersed in the martial arts and has earned a Black Belt in Kenpo Karate. She also studies and practices, Brazilian Jujitsu, Krav Maga, and Mixed Martial Arts.

One Response to “Howling With Rose Caraway”