Why We Love Vampires by Barbara Elsborg (@BarbaraElsborg)

Vampires have always repulsed and fascinated, these days they more fascinate than repulse. The fact that vampires are human-like creatures enables us identify with them to a certain extent, letting us believe we can understand the way they think and behave, or at least explain it in human terms. They’re pure predators. They deal in death. They consume the substance that keeps us alive. They have superpowers – super speed, super hearing, super sexual recovery (!) and can read minds. They’re stronger than us, more powerful than us and therefore can exert control over us. They’re dead and yet still with us, which might strengthen belief that death is not the end.

The vampire is probably the most popular fictional monster ever created. How ironic that these super-strong, human-like creatures who are able to seduce with a few words and might suck their victims dry can be repelled by the smallest cross and a whiff of garlic, and unless invited in cannot enter a private dwelling. In the early days, that is. The first vampires in fiction were true monsters and really did terrify readers. Dracula is a story of sexual seduction and rape. It must have been comforting to know that with a simple stake through a vampire heart — they die, though of course, it’s never quite that easy. Even now, vampires in horror movies continue to terrify — Let the Right One In and Thirty Days of Night had me cowering behind the couch.

So are we obsessed with blood, sex, death, fangs? More likely we are fascinated by the idea of a life that can go on forever but without our bodies aging, a life unencumbered by problems of ill-health or any sort of weakness. Yet how could we cope with the loneliness when those around us die and we live on? Vampires give us an insight into what life would be like if we could indeed live forever. Anne Rice is the master at exploring the tortured vampire psyche. LeStat remains my favorite vampire of all time. While Christine Feehan’s vampires, though they might go through hell to reach their mate, are assured of a happy future. There’s room for all sorts of vampires and there always will be.

Modern vampires are more sophisticated and have evolved to suit our needs, and that, I believe, is the key to our continued fascination. In literature, we’ve mostly turned them into gorgeous tortured guys on the fringes of society, who never age and are brilliant in bed, especially if they’re feeding at the same time. We dress them immaculately in black, make them enigmatic, and in need of rescue from their torment by the love of a worthy woman. Once they find their mate, and they’re prepared to spend centuries looking – how romantic is that? – they are the ultimate romantics, devoting themselves to their partner’s happiness. We’ve created an anti-hero that can go on forever- literally.

There are no longer any ‘rules’ about what a vamp can and can’t do. They might even sparkle! Garlic is no longer a problem, they laugh at crosses, some can go out in daylight, they don’t have to sleep in coffins, they don’t have to drink human blood, they’re not all beautiful and yet they’re still compelling.

But they’re the ultimate bad boys and we all know how much we love those. 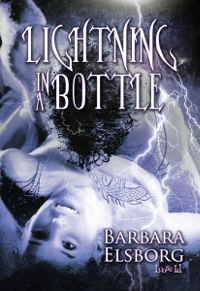 Lightning in a Bottle

Lightning is the third in my Trueblood series about a vampire family but all the books are standalone. The link being that a sibling appears in each book, so you don’t have to read one before another – though the last does sum everything up at the end. The vampire in Lightning is Erin – but she has a slight problem. She doesn’t remember that she’s a vampire.

Felix feels like he’s been hit by lightning. After successfully avoiding responsibility for most of his life, it’s thrust upon him when his parents die. As the thirteenth Earl of Sherbourne, he inherits Pevenhurst Castle, the home that’s been in his family for four hundred years – and when he can’t afford to repair it, he’s forced to sell.

Lightning isn’t supposed to strike twice, but when the electrifying Erin Markov whirls into Felix’s life she gives him more to worry about. Erin’s exciting and unpredictable, in and out of bed, if only he could get her to stop dancing in thunderstorms, rollerblading in the middle of the night and leaping around on unsafe roofs. Plus she has this annoying habit of biting his neck.

Erin wishes she could remember who she is. The couple who claim to be her parents leave her in a dilapidated stately home with supplies of a revolting energy drink and instructions not to go out in the sun. Then she discovers sculptor Felix living next door and life becomes far more tasty.

Until the day Erin finally remembers who she is and wishes she hadn’t.

Felix’s hollow fibre duvet had never seen so much action. It bucked and heaved as he writhed beneath it. The faster he moved the better. The harder he thrust the better. Felix groaned and flung out his arms and legs like a frenzied starfish before he curled up into as small a ball as possible. The chill crept back. Nowhere near energetic enough. He needed to keep moving. Felix rubbed his chest — and, oh shit, by default his cock — against the bottom sheet. Before he grew overexcited, he flipped onto his back and kicked his legs in a bicycling action. He was warmer now but exhausted. Ah, and horny.

The flash of heat resulting from his acrobatics was so fleeting Felix might as well have saved his energy. The bedroom window was closed, the thick curtains drawn, but the arctic wind blasting the coach house had managed to find a way through every crack to torment him. Felix could see bursts of transient ghosts each time he exhaled. With no warm body to cuddle up to and no spare cash to install central heating, he’d end up freezing to death before the will was sorted and he received his share of the money.

Too cold to stay in bed, yet Felix had no desire to get up. Doing so would mean acknowledging Black Friday had started. He pulled the duvet tighter around his shoulders and rolled over, wrapping himself in a blue cocoon. Maybe he wouldn’t get up. Maybe he’d lounge in bed all day, and while he slowly turned into an ice pop he’d pretend he had plenty of money, a faithful girlfriend, and a flashy sports car.

Felix gave brief consideration to what he’d like most and had to admit it was the car. How sad was that? Yeah, well, while he was frozen in de-Nile, he’d also need to pretend he hadn’t signed away his ancestral home, the place that had been in his family for almost four hundred years.

He threw the duvet over his face and cringed. For the first time in his life, he was glad his parents were dead. Lucky for him he didn’t believe in an afterlife, so there was no chance of them looking down in disappointment from heaven. Still, he did believe in hedging his bets, and just because he didn’t believe, didn’t mean his parents weren’t reclining on clouds, clutching gin and tonics and scowling down at him.

“Sorry,” Felix turned to mutter into his pillow. “Sorry I let you down. Again.”

Though this time, the mess he was in wasn’t entirely his fault. The fact that Felix had remained in blissful ignorance of how far things had deteriorated in his absence brought guilt he had to live with, but if his father were alive, Felix would have strangled him. Fucking inconsiderate to get himself killed before Felix had a chance to do the deed.

Barbara Elsborg lives in West Yorkshire in the north of England. She always wanted to be a spy, but having confessed to everyone without them even resorting to torture, she decided it was not for her. Vulcanology scorched her feet. A morbid fear of sharks put paid to marine biology. So instead, she spent several years successfully selling cyanide.

After dragging up two rotten, ungrateful children and frustrating her sexy, devoted, wonderful husband (who can now stop twisting her arm) she finally has time to conduct an affair with an electrifying plugged-in male, her laptop. Her books feature quirky heroines and bad boys, and she hopes they are as much fun to read as they are to write.

6 Responses to “Why We Love Vampires by Barbara Elsborg (@BarbaraElsborg)”