Grace Marshall has made An Executive Decision! 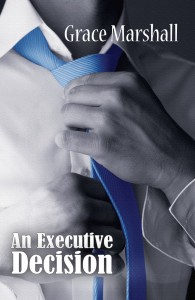 Grace Marshall has made An Executive Decision

Grace Marshall is  very happy to announce that An Executive Decision is now officially available for Kindle in the US and the UK! And you’ll be able to hold the print version in your hot little hand November 1st.

Radio or Not, Here I Come!

I had the very big pleasure of being interviewed, along with Hazel Cushion, Managing Director of Xcite Books, by Phil Rickman for his popular Phil the Shelf programme on BBC Radio Wales. Phil Rickman is the author of the best selling Merrily Watkins mysteries, the John Dee series and several paranormal novels. Though I didn’t have the pleasure of meeting the man face to face, I was ushered into the studios of the BBC Radio facility on the Surrey University Campus several weeks ago, and there, alone in the small cubicle, Phil’s ethereal voice filtered into my ear via the magic of techy stuff. The interview lasted about twenty minutes, covering everything from Fifty Shades of Grey mummy porn to interesting uses for truffles in The Initiation of Ms Holly.

As you might expect, I excitedly alerted all of my friends that I was going to be on Phil Rickman’s show, and we all gathered round the ‘radio,’ just like in the old days, tweeting and Facebooking over our glasses of wine, not so much like the old days, only to discover that BBC Wales was running a cricket match instead. No warning, nothing. Just suddenly cricket. None of us knows what happened, and no doubt there will be a pod cast at some point. In fact, I just got a text from Hazel saying she heard it. However, in the wilds beyond the mysterious offices of Xcite Books and Accent Press, we’ve heard nothing. Even Phil has heard nothing, and he’s threatening murder on his end. But he has promised to let me know when the pod cast is up, and I’ll be sure to pass on the word.

As much as I enjoyed the panel and the short bit of the festival I was there for, the best part of the two days was having face time with Hazel and getting to meet her lovely family. There was much talk of writing and publishing, as you can imagine, and I had a fabulous time watching the opening ceremony of the Olympics with the entire Cushion family.

I’m working flat-out at the moment to finish the final rewrite of Riding the Ether, the second book of the Lakeland Heatwave Trilogy. If anything I’m even more excited about it than I was Body Temperature and Rising, which was amazing fun to write.

There’ll be more exciting K D Grace and Grace Marshall news coming up in the month of August, so be sure to keep an eye out on this site and on both K D and Grace’s face book and twitter pages. In the meantime, hope you have a hot August in the very best sense of the word.  I’ll leave you off with a little taste of An Executive Decision.

Ellison Thorne’s business partner, Beverly, and his brother, Garrett, create the Executive Sex Clause as a joke speculating that no-strings, stress-free sex in certain employee contracts would raise productivity and act as a cure for Ellis’s lacking love life.

Enter Dee Henning, the queen of no-time-for-sex. Young, hungry, gifted. When negotiations on a major project break down, Dee and Ellis realise the Executive Sex Clause could be the ultimate secret weapon for success. But secrets seldom remain secret, and Dee and Ellis soon learn there’s no such thing as no-strings where the heart is concerned.

By the end of the third day negotiations were at a deadlock, and the Paris heat was beginning to take its toll in more ways than one.

Ellis slammed the door to the hotel suite behind them and yanked off his tie. ‘I know the woman doesn’t like Americans, but the only one she’s hurting by not accepting our offer is Trouvères. She has to see this is the only way to move things forward.’

‘It’s got to be some sort of bluff.’ Dee threw her jacket across the couch and rotated her aching shoulders.

‘Can’t you talk to Daniels? Surely he can make her see reason.’

‘I have talked to him. He’s at his wits end as to why she’s behaving like this. Besides, he works for her, remember?’

She slammed her computer bag down on the couch. ‘I told you there’s nothing between Jason and me, and we’re both too professional to let –’

Ellis interrupted. ‘Look, I said up front that this deal was a long shot. Pulling it off may take a lot more time than either of us expected. Anyway, I should have known better than to get caught up in the excitement. Don’t take it personally. I’m only saying you may have bitten off more than you can chew this time. You’re not exactly working drive-through at McDonalds these days, you know?’

The pain returned to her shoulders with a vengeance. ‘At first it was a real shock, Ellis, but I figured that one out fairly early in the game.’ Dee bit back her sarcasm, remembering his comments about no one making him angry until she came along. She was about to excuse herself for a much-needed shower and time to cool her temper when the phone rang. Ellis answered it.

He dropped the receiver back into its cradle. ‘That was Yvette Rousseau’s secretary.  Tomorrow’s meetings are cancelled. Apparently Yvette sees no reason for further negotiations.’

‘Shit.’ Dee turned on her heels and headed for her room. Maybe she’d have a good cry while she was in the shower. It certainly wouldn’t be her first since she’d started working at Pneuma Inc.

But Ellis grabbed her by the arm. ‘Where are you going? We have a disaster here, Dee. We need to regroup and figure out what to do about it. Your pouting can wait.’

Anger joined frustration and became a seething boil. She jerked her arm away, certain a shower would no longer be enough to cool her down. ‘I’m not pouting.’

He shrugged. ‘What else am I supposed to think when at the first sign of trouble you run off to your room. We have a mess here, we need to fix it.’

It was then that she snapped. She stood facing him nose to nose in a glare-down, no longer caring if she made him angry. ‘Fine, goddamn it, let’s stop the bullshit and fix it then. I’m sick and tired of your snide remarks about Jason and me, and your condescension about my lack of experience. Guess what, Ellis, I know I lack experience, and you knew it when you hired me, so tell me something I don’t know!’

His eyes flashed white hot, and the line of his jaw hardened. The intake of his breath was harsh against the soft hum of the air conditioning. It came as a total surprise when he grabbed her, and for one frightening second, she thought he was actually going to shake her. But before the thought was completely formed, he pulled her to him so hard that she feared whiplash, then he did the unthinkable. He kissed her. He kissed her hard. His mouth was bruising and tyrannical against hers, swallowing her breath even as she fought to swallow his. At first she pushed him, pushed him as hard as she could. But he only yielded enough to step back, pulling her with him, kissing her harder, holding her tighter, tight enough to crush her breasts against his chest. It took a second for her brain to register she was pushing him back toward the sofa, and he was letting her. She bit and nipped at him like an angry wolf, yanking and shoving his jacket off over his shoulders as she pushed.

There was ripping and tearing. She wasn’t sure whose. She didn’t care. At least one button went flying.

With one hand he tugged and yanked her skirt up over her hips, with the other he shoved down the straps of her bra and kneaded and cupped.

It soon became clear they weren’t going to make it to the sofa. She’d just managed to force Ellis’s trousers down over his hips when he plopped onto the chair at the computer desk, pulling her on top of him as he figured out how to release the front catch on her bra.

‘Oh my god!’ she cried out as the chair went over backwards landing them in a heap on the soft carpet …