A Rubenesque Anthology from The Northern Birds, Victoria Blisse and Lucy Felthouse 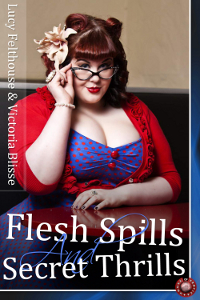 House of Erotica brings you a collection of sexy rubenesque short stories, sensually written by Victoria Blisse and Lucy Felthouse. This range of exciting stories will leave you desperately wanting to read on…

When Lorella’s boyfriend Chris suggests that she’d look sexy in a corset, she finds the mere thought hilarious. A big girl like her would look ridiculous in such a thing! But as she’s always up for trying something new, she hits the online shops. When her new corset arrives, Lorella can’t wait to try it on and see how she looks, ready to surprise Chris when he gets home. But when she does, she gets a thrilling surprise of her own.

Miri on the Wall

Callum’s a prolific artist, with many beautiful models on his books. But there’s only one that stands out for him – Miri. He’s never had the courage to do anything about his feelings, though. When a client commissions a nude painting of a rubenesque woman, Callum has a dilemma. Miri is the only suitable model – but will she agree to the project? And how will Callum cope with the object of his love and lust being completely naked in front of him?

The Bishop is visiting and Caroline is practising her solo when her husband stops accompanying her on the piano and initiates a far more carnal kind of praise.

Down Amongst the Daffodils

Rachel bumps into an old crush from school, Stephen, who’s now a gardener at a local park. They get down and dirty in the grass beside the bright yellow daffodils.

More about the authors: