Body Temperature and Rising, the Long Way Around 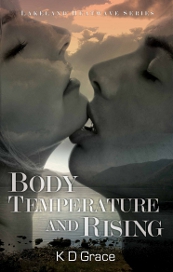 Considering the way it all began, Body Temperature and Rising could hardly have been anything BUT paranormal. My good friend Helen Callaghan and I decided to get the first day of our NaNoWriMo experience off to a good start by driving to Avebury to write at the pub there.

Avebury is a village set in the middle of the biggest Neolithic stone circle in Europe, a stone circle 500 years older than the Pyramids. 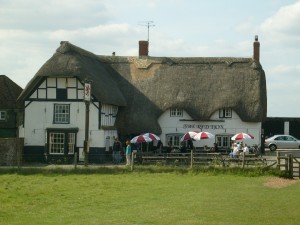 The Red Lion Inn. Taken on a much nicer, much less haunted day.

Because the stones are much easier than Stonehenge to access, and there is no charge, Avebury has become a gathering place for modern Pagans and other New Age folks. And our timing was perfect, as it was the day after the old Celtic holiday of Samhain and even in spite of the torrential downpour that we arrived in, we found ourselves surrounded by druids, witches, wiccans and all manner of Pagans celebrating what is essentially Celtic New Year. The people watching was fabulous, even with the drowned-rat effect.

Never mind that, Helen and I were there to write, so after a scuppered attempt at an inspiring walk in the wind and rain, we settled in at the Red Lion Inn, right in the centre of the stone circle. This 16th Century pub proudly boasts the reputation of being ‘the most haunted pub in England.’

It didn’t take us long to get pulled into the writing, so after lunch we wrote our way through numerous coffees and pots of tea, watching the super-saturated Pagans come and go in the pouring rains. There was a fire in the fireplace, and we were both in the zone.

By late afternoon, sharing leftover Halloween candy across the table while the Muse whispered in our ears the pub was nearly. Suddenly there was an enormous banging sound, like doors slamming. It seemed to be coming from the hall that led to the restroom behind us. The space that had felt toasty warm all at once felt chilled, and we were both shivering. Seconds later, one of the wait staff came running back to the restrooms looking very panicked and very pale. From behind the bar to the kitchen we heard murmurs and nervous laughter. We overheard mentions of the ghost, followed by more murmurs and mentions of supernatural phenomena when the volunteer returned unscathed to join the rest of the staff cowering behind the bar. And then the room was warm again. Helen and I ate more sweets, ordered another pot of tea and discussed our near-brush with the supernatural. Then we kept writing. 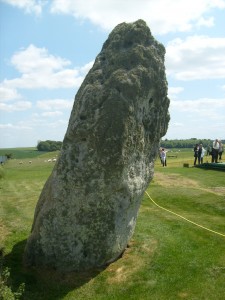 One of the Avebury stones on a nice day.

It was only as dark settled and the rain hadn’t let up even a little bit that we remembered two things. We weren’t parked in the pub car park, but in the National Trust car park on the other side of the village, a car park that closed at dark.

We quickly gathered our belongings and made a run for it, trying to hold umbrellas to protect us from horizontal rain, and struggling to see our way on the tiny, unlit path back to the car park, illuminated only by the pale green light of Helen’s mobile phone. With boots full of water and a banged knee from the metal fence post I ran into, we finally arrived at the Car Park to find it deserted except for Helen’s car, and thankfully for the National Trust Land Rover parked by the gate with a lovely NT employee waiting patiently to let us out.

Oh, and that intsy-weentsy little second thing we’d forgotten about… We’d been so busy talking on the way over to Avebury that we’d forgotten to get petrol for the car, and we were running on fumes. Avebury has a pub, several tourist shops and a post office. No garage. The next town of any size up the deserted highway was Marlborough. Everyone with any common sense was long since inside out of the horrid weather. It felt like we were the only people on the planet. We were only fifteen miles from Marlborough, but we weren’t sure we were even going to get to when we realized the Kennet River, which usually runs under the road was now running OVER the road. Thinking only of the fumes quickly dissipating in the petrol tank, we ploughed through the raging waters of the Kennet and continued on our way, a thought which still gives me a chill when I think what might have happened crossing a flooded river as we did. But only a few miles up the road, looking like the gates to paradise was a small Murco station. And it was open! We were saved! Thus began Lakeland Heatwave: Body Temperature and Rising, which at that time was called ‘Love Spell.’

During the month that I wrote BTR, a time when I already had a very full writing plate on top of the novel-in-a-month plan, the paranormal experience continued as I was magically transformed into The Bitch 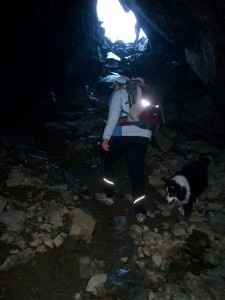 from Hell, a creature so unpredictable, so terrifying, so vile that only my husband, Raymond the Brave, could successfully handle being in her presence for long periods of time. The man has permanent psychological scars from that infamous November, I have no doubt.

In the meantime, I got trapped in the Eurostar Tunnel and The Initiation of Ms Holly was born, followed by The Pet Shop while BTR languished tucked away in my computer as a Word file. I just wasn’t confident enough to attempt anything paranormal. Then, maybe it was the influence of the Avebury Ghost, but I decided to propose Body Temperature and Rising to Xcite, knowing that it would need a lot of reworking because I had grown a lot as a writer. Once Xcite accepted my proposal, I found myself totally unable to continue with the rewrite. Every attempt felt like a false start, every effort felt like it wasn’t right somehow.

Just when I was about to lose heart, I took a long walk and realized that if it were going work as I envisioned it, Lakeland Heatwave would have to be a trilogy. Xcite went for the proposal and from that point on, the ghosts and witches practically wrote the story for me.

Of course with the action set in the Lake District and the first chapters set in a bad storm on the fells and in a slate mine shaft, I was forced to make several research trips to the Lakes. How I suffer for my art! I have no doubt I’ll need to do much such suffering as the Lakeland Heatwave Trilogy unfolds.

Body Temperature and Rising will be available in print in February 2012, and as is the happy tradition, will be celebrated with wild partying and raunchy reading at Sh! Hoxton.

American transplant to the Lake District, MARIE WARREN, didn’t know she could unleash demons and enflesh ghosts until a voyeuristic encounter on the fells ends in sex with the charming ghost, ANDERSON and night visits from a demon. To help her cope with her embarrassing and dangerous new abilities, Anderson brings her to the ELEMENTALS, a coven of witches who practice rare sex magic that temporarily allowsghosts access to the pleasures of the flesh. 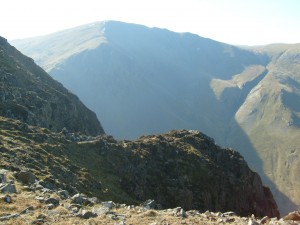 Dale Head. The sight Marie would have seen without the mist.

‘First you treat me like I don’t exist, then you go all big brother on me like I’m too delicate and soft-brained to take care of myself. Well I have news for you, Tim Meriwether, I was taking care of myself for a long time before you decided I needed looking after.’ She shoved again, and this time he grabbed her with such force that she felt the bones in her neck pop.

She bucked underneath him and clawed at his shirt. ‘Then do something about it, damn it, and stop toying with me.’ Several buttons popped and flew across the stable floor. He forced her legs apart with his knee, moving it up to rub against the crotch of her jeans. She shoved his shirt open and arched up to him as he pushed her t-shirt up and manoeuvred and tugged, forcing her breasts free from her bra into his spayed hands and hungry lips.

She fumbles with the fly of his jeans, sliding an anxious hand into his boxers. He huffed a breathless grunt, and the muscles low in his stomach tense as she closed her fingers around his engorged penis and began to stroke.

‘I’m telling you it won’t open,’ she yelled back, feeling an icy chill blasting her from behind. With one final tug, the door gave and she tumbled backward on her ass. The sharp knife edge of light that shot through the darkness was blinding, like a flashbulb going off, leaving a deep bruised after image dancing in front of her face, an after image of Deacon.

She cried out and crab walked backward, as he stepped toward her, unfurling his bullwhip, in what seemed like endless slow motion.

On a road trip across America, Liz Martin’s car breaks down in the middle of nowhere South Dakota, and the ride a Good Samaritan lorry driver offers her is not exactly the one she expected. Don’t miss my story, ACCIDENTAL HITCHHIKER, now available in Xcite eBooks anthology, Cocktales, Between The Sheets

A great way to celebrate is to download my hot new story, HIRED HAND, in Xcite Book’s new ebook anthology, Six of the Best Spanking Stories 2.
Pretty city boy, Tim Harris, is the last man Suzie Sheridan would have hired to help her on the farm had he not been the only one who applied for the job. But with strict discipline generously applied in all the right places, even Suzie is amazed at just how good a hired hand Tim turns out to be.