I’ve lived in the UK long enough to know that the only predictable thing about the weather is that it’s unpredictable. However, there are exceptions. I can predict beyond a shadow of a doubt that there will be a sizzling, squirmy, humid heatwave in Scarborough on June 22nd next year. It’s the smutty kind of heatwave that guarantees fun, laughter and a heavy dew, and I promise, you won’t want to miss it. 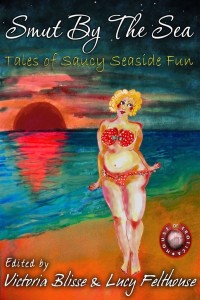 Convention for erotica readers and writers to be held in the seaside town of Scarborough on June 22nd, 2013.

The brainchild of Victoria Blisse and Kevin Mitnik, with help from their glamorous assistant, Lucy Felthouse, Smut by the Sea promises to be a smut-filled extravaganza in the beautiful seaside setting of Victorian Scarborough. The town’s library will be hosting the event.

Or perhaps you’d like to attend informative panels on getting published, marketing your work and other smut related activities? It’s all covered, so you can check out whatever tickles your fancy!

Just as you’re settling down from hearing all those fabulously naughty stories, your heart rate will be rising once more as the result of an intermission with burlesque dancers!

Finally, there will be a Q&A panel with a range of authors, book signings and some good old fashioned networking and socialising.

It’s still early days so there will be lots more authors, sponsors, exhibitors and attendees coming on board as the conference draws closer, but hopefully this has given you an idea of what to expect from Smut by the Sea.

So, what are you waiting for? Mark your diaries for Smut by the Sea, 22nd June 2013. Early Bird tickets have been released, and there are less than 200 available at this bargain price, so make sure to grab yours quick, before it’s too late! http://smutbythesea.eventbrite.co.uk/

Keep your eyes on the following links for further information on sponsors, attending authors, exhibitors and more:

Also, just for a bit of fun, you can share your seaside themed photos on the Pinterest page: http://pinterest.com/mitnik/smut-by-the-sea/

The event is still taking on more exhibitors, sponsors, speakers and readers, so if you’d like to get involved, please http://smutbythesea.co.uk/contact-us/

About Smut by the Sea

Blisse UK is the team of Victoria Blisse and Kevin Mitnik. Specialising in bespoke creations, working together they strive to bring originality and excellence into all that they do. Victoria is an award-winning author & Kevin is a twice Webbie winning web designer. They have over 15 years experience of creating successful websites with a portfolio of recent works available on http://blisseuk.com. Smut by the Sea is a new venture as they combine their love of the seaside with a love of erotica.

Soldiers and Lovers, a New Release by Kris Andersson → ← A Calmedy of Errors