Soldiers and Lovers, a New Release by Kris Andersson 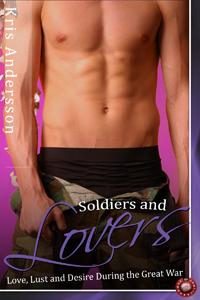 In the twilight year of the Edwardian age, two young boys, Eddie and Bertie, embark on an erotic adventure at the Great Hall, discovering the pleasures of male love as they explore their emotions and their bodies for the first time. But two acts of sexual betrayal will shatter their sensual idyll and soon the horrors of the Great War will change their lives forever. Only one of the boys will return from the trenches of the Somme to begin a fresh journey that will take him from the hidden gay bars of Soho, to the decadent bohemian world of artistic Chelsea and the pleasurable possibilities of life aboard a luxury liner. Soldiers, servants, businessmen, tycoons, artists and models – it seems like every man is a more than willing partner in this lusty, sex-fuelled romp through the early 20th Century

It was a cold damp November late afternoon, the first traces of fog beginning to fill the air as I walked along Regent Street, trying to look as though I belonged, as if I was part of the crowd that bustled in and out of shops, hailed cabs and jostled against each other, trying not to drop parcels as they hurried for the warmth of home.

I had been out since early morning, wandering the streets of the West End, looking in windows for the cards that suggested there might be work inside then, as the need to succeed became more desperate, finding the courage and the nerve to walk into shops, bars and restaurants and ask if there was work of any kind to be had.

The answer was always the same, a polite no from the kinder ones and a brusque refusal from those who had forgotten what it was like to be cold and hungry in a strange city where you have no friends and no prospects.

So now I was heading towards Piccadilly, wondering yet again why I hadn’t gone back to the Great Hall once I had received my Army discharge, one of the lucky thousands to have survived the trenches more or less intact while the men we had fought alongside remained in the mud of the French killing fields.

The answer was that there were too many memories back at the Great Hall, images that cluttered my mind as I stared without really looking at shop window displays of goods I could not afford, feeling the wet rising through the hole in the sole of my shoe, the damp of the thickening London fog taking hold of the fabric of my thin, shabby jacket.

Eddie would have laughed if he could see me now, tell me that I didn’t belong here, that London wasn’t the city for a country boy like me, that there would be a warm welcome waiting for me if I could only forget the past – a past that he could never return to.

We had arrived at the Hall together, two young men embarking on new lives as footmen, thinking we were about the escape the drudgery of rural life and only too late realising that domestic service was an even greater drudgery.

Every night we would escape to our tiny room up in the attic and collapse onto our thin iron bedsteads, falling straight into a deep sleep, knowing that in just five or six hours the hard daily routine would begin all over again, the austere Jordan, butler and master of the Servants’ Hall, watching out for every little mistake, every failure of protocol.

It was another night like this, the end of a wearying day of domestic chores in the cold and damp that Eddie first came into my bed.

“You don’t mind Bertie, do you?” he asked, as he pressed up against my back. “It’s so cold, I know I’ll never get to sleep – and nobody need ever know.”

I didn’t mind at all – in fact, I even enjoyed the sensation of his chest pressed against me, the feeling of his breath on my neck, his arm casually around me.

It reminded me that we were no alone, that there was a friend who felt just as lonely and far from home as I did.

It continued that way for a few nights, the simple pleasure of no longer feeling cold and alone but then perhaps a week later, I felt a movement against me that I recognised straight away.

Eddie seemed to be asleep but I could feel his cock stirring against the fabric of his nightshirt, pressing against the back of my leg –and I have to confess that, much to my surprise, I enjoyed the sensation and I had to stop myself from simply reaching back to grasp that fledgling boner in my hand and begin to stimulate it.

One Response to “Soldiers and Lovers, a New Release by Kris Andersson”