It’s been awhile since I’ve had a news update and with an exciting summer fast approaching and lots of things happening, I thought it was time I caught everyone up on the latest. So grab your diaries and mark the dates and hold on to your hats. It’s gonna be a wild ride!

In the Flesh London Re-launch

The first session features readings by prolific erotica authors Liz Coldwell (former editor of FORUM magazine), KD Grace, Jilly Boyd and will be hosted by Suzanne Portnoy, author of  The Butcher, The Baker, The Candlestick Maker: The Intimate Adventures of a Woman Who Can’t Say No.

The venue The Alley Cat is located in the basement of what was once the famous Regent Sound Studios on Denmark Street. Denmark Street has an illustrious history, where the Rolling Stones, the Kinks, Elton John and David Bowie recorded songs but also where serial murderer Denis Nilson worked in the Job Centre on the corner.

Come join us for rude reading pleasure and lots of surprises.

And just look at who I share that honour with: Rachel Kramer Bussel and Kay Jaybee!! Also on the list are a couple of writers I’m sure no one has ever heard of before, but I wish them well anyway – EL James and Sylvia Day. (heh, heh!) I’m chuffed to bits just to be nominated and to be in such fine company. And I’m even more chuffed that I’ll actually be able to be in Birmingham on the 23rd of June for the ETO with author extraordinaire and good friend, Kay Jaybee to do a little bit of book signing for Xcite Books. Then afterwards, it’s off to the award ceremony, dawlings! Black dress and pearls at the ready!

And it gets even better! As if it wasn’t enough to get to be in Birmingham for the ETO Awards, I’ll be coming down from Scarborough after a wild and crazy Saturday at 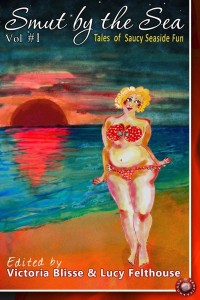 Smut by the Sea

In the Evening there’s a Launch Party Extravaganza with fun, laughter & prizes galore and lots more, including an exclusive performance of a scene from The Eye of the Beholder, the wildly wicked, quirky burlesque play I’ve written with the multi-talented Moorita Encantada, who will be performing. Check out the schedule of events and if you want to join the fun, all you need to know is on the Smut by the Sea website. I hope to see you there.

Yes, I know it’s still a long ways away, but it’ll be here way before we know it, and I just have to share the news that I’m going to be speaking with the fabulous Victoria Blisse at Eroticon next year, on a subject that is near and dear to both of our hearts, Sex and Spirituality. Victoria and I have been dreaming and scheming this topic for a while now, so it will be great fun to finally be able to share our thoughts on a very important topic and have a whole roomful of erotic authors and bloggers share their thoughts with us.

Also, I’ve been asked to do another writing workshop for Eroticon 2014. I’m very much looking forward to that, since it was so much fun last year. I’ll be keeping you updated on dates, times, places and all the fab speakers as the event draws nearer, and I’m sure I’ll be able to convince Ruby Kiddell into telling us more as time grows closer.

What’s in a Name?

We authors need lots of validation, as we’re very much a neurotic lot, or at least I am. We need to feel the love, probably more often than most people. Sometimes that happens in the form of award nominations or good reviews or being asked to speak or read at an event or someone simply saying they 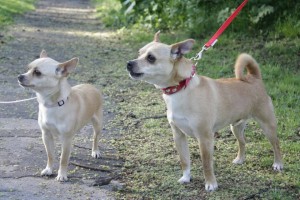 enjoyed our book. And sometimes it happens in completely unexpected ways. Last weekend I was validated and shown the love in the most unexpected and most moving way I can ever remember, so I had to share it with you.

Most of you know Chris and Caroline Bowness. They’ve been on the Passionate Partners segment of my blog and Chris is now a regular contributor with his Consenting Adults post once a month. (He also has a weekly Consenting Adults news round-up you won’t want to miss)In fact I met Chris on Facebook when he messaged me to say that both he and Caroline had enjoyed my novel, The Pet Shop, and from there, we struck up a friendship.

Last weekend, the Bowness family welcomed two new members to the household, two rescue puppies, half Jack Russell and half Chiuaua. Imagine my delight to learn that these two bundles of energy (which all of Chris and Caroline’s FB friends saw bounding around on the lovely video they shot and shared on FaceBook) were named Stella and Tino! Yup! That’s right! The lovely Caroline and Chris named their naughty Pets after MY naughty Pets! For those of you who don’t know, and haven’t yet read my novel, The Pet Shop (shame on you if you haven’t!) Stella and Tino are the main characters, and Tino is a very naughty Pet, indeed! I have it on good authority that Tino Bowness is misbehaving just like his namesake!

So, to Caroline and Chris Bowness, a heart-felt thanks. There is no compliment you could have possibly paid me, as a storyteller, that would have meant more to me.

Most of you who follow me on Twitter or are friends on Facebook know that my counterpart, Grace Marshall, is hard at work on novel three of her Executive Decisions trilogy, The Exhibition. At the moment she has just passed the 34,000 word mark, which is roughly a third of the way, and she has left Staci and Harris in a very awkward situation, where they’ll probably have to remain until after the long weekend. Hubby’s lovely sister, Cindy, her OH Pat and the fabulous niece, Juanita, are coming all the way from the steamy south of the US to the bracing English spring for a visit. This bank holiday Monday, Grace wants to take them all to the County Show to see the fancy chickens and eat some fresh strawberries and cream … all for inspiration, you know. I think she might allow me to go along if I promise to behave myself.

Wishing you all a strawberries and cream sort of weekend … and fancy chickens too if you’re so inclined!