Coming Together: With Curves, edited by Victoria Blisse and Lucy Felthouse 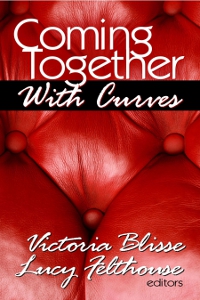 Curvy girls and the men (and women!) that love them is the theme of this charity anthology, edited by Victoria Blisse and Lucy Felthouse.

From Zumba classes to Burlesque dancers, all kinds of big and beautiful women are portrayed between the pages of this book. Read about birthday surprises, smut at the gym, horse riders, lusty couples, naughty neighbours, skilled bakers, rope bondage and misunderstandings from some of erotica’s best authors.

Bonnie stifled a sigh. He was doing it again. Staring at her, as he had been every day that week. She was on a fortnight’s training course through work. She was the only one from her office who’d been sent. As a result, she knew no one and ended up sitting alone in the college’s cafeteria at lunchtimes. She’d had a couple of invites from kindly people also on her course, but she’d turned them down. It wasn’t that she was being rude or anti-social, she just hated people to see her eat. She was a big girl—that was putting it politely—and when people saw her eat, she could feel the judgment rolling off them in waves, the thoughts that she was fat because she ate so much.

It wasn’t true. About what she ate, that was. She was fat, and there was no denying it. But it certainly wasn’t her doing. She’d been born to large parents, and despite a healthy diet and plenty of exercise, she was still overweight. All she ever managed to shift was a pound or two here and there, and that was hardly noticeable, particularly on a woman her size. She kept at it, though, resigned to being a larger lady, but determined not to get any bigger.

Because she’d always been big, she was used to the snide comments, the dirty and derisive looks, the open stares. So it didn’t upset her any more, but she still got irritated when people simply gawped at her. Surely one glance was enough for them to ascertain that yes, she was a shapely girl, and then move on. In most cases it was, particularly if she glared at the person in question. But not with this guy. She was sure he was trying to be subtle, because he often averted his gaze as she trained hers on him. But even if he’d looked away, she could tell by the position of his head and body that he’d been peeking at her. Again.

Now, on day seven, she was almost at boiling point. What the hell was his problem? Had no one ever told him it was rude to stare? She was on the verge of doing just that.

Eating her lunch was an unpleasant task, knowing she was being observed. If she hadn’t been so damn hungry, she’d have left it. But she’d been running late that morning and had committed that mortal sin—missing breakfast. So her chicken salad—with no dressing—was absolutely necessary to avoid making herself feel ill, or passing out, so she devoured every last morsel. She ate faster than she normally would, not because she was being greedy, but because the sooner she finished eating, the sooner she’d stop feeling so damn self-conscious about the guy across the room watching her.

She decided to give him one last chance. When she’d finished her lunch, she’d drink her carton of apple juice, then sit for a few seconds, doing nothing. If he continued to look at her, she was going to stomp over there and give him what for. If he didn’t, then she’d carry on with life and do her best to forget about him and his rudeness.

Deep down, she knew she was going to have to go over and say something to him. After seven days, he wasn’t going to suddenly amend his habits. She was just being a bit of a wimp, really, hoping to find some way of getting out of confrontation, because she didn’t like it, not one bit, and it was absolutely a last resort. Unfortunately, she couldn’t think of a single other way of stopping him from doing it. Perhaps she could put up a sign in front of her saying “Please stop staring at me.” But if he couldn’t take the hint when she’d glared at him, he wouldn’t take any notice of a piece of paper.

Several minutes later, her salad was gone and she moved onto her drink. With a sinking feeling in her gut, she saw he was just as interested in her now as he had been when she’d been eating. Damn, confrontation it was then.

Draining the carton, she gathered her plate, cutlery and other rubbish onto her tray, stood up and slid it onto the rack nearest her. Then she returned to her table, grabbed her bag, pulled in a deep breath through her nostrils and marched over to the Peeping Tom. She slid out the chair opposite him and sat down on it.