Jeremy Edwards Shares the Story behind The Pleasure Dial

The Pleasure Dial: An Erotocomedic Novel of Old-Time Radio

It began with a city: Los Angeles.

I’ve set stories in Boston, New York, Philadelphia, and San Francisco; in Hartford, Cleveland, Chicago, Providence, and Miami; in Florence, in London, in Ottawa, and in Brussels.

And, on a couple of occasions, I’ve set them in Los Angeles: specifically, in Hollywood—or rather within “Hollywood,” the several areas of greater Los Angeles in which big-budget motion pictures are made. 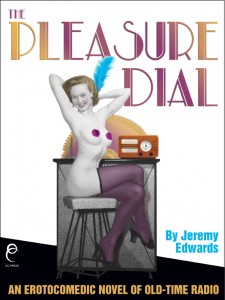 Despite these earlier excursions into Los Angeles, there came a time when I was contemplating a new Los Angeles story. And it didn’t take much contemplation to determine that my new LA story would be an old LA story. I would be returning to “Hollywood,” but the Hollywood of an earlier epoch.

Eventually I decided to write, not a short story, but a full-length book set in that world.

You see, I’m a fan of classic radio comedy (the sillier the better), and I also love the risqué deliciousness seen in some of the early talkies. The combination of alluring sexuality and inspired silliness that was sometimes produced before the movie studios became prudish and zany humor went out of fashion lines up very well with my own sensibilities; and so although I usually work with contemporary settings, I realized that the Hollywood of the early 1930s would be a perfect environment for a Jeremy Edwards erotocomedic novel.

I’d been doing a lot of reading about what it was like to be a staff writer for radio and television comedy programs in the mid-twentieth century (just for my own interest—I didn’t realize at the time it was “research”!)—and I fell in love with the idea of putting witty radio writers at the center of my next sexy adventure. Not only could these people be the ideal protagonists for the cocktail of sensuality and repartee I was planning, but I could play at being an old-time radio writer myself, as I fleshed out the bits of “show within the show” programming that would be found here and there in my book. And, when sitting in my writing room and taking my characters into their writing room, I could orchestrate discussions such as this one:

“Look at this: first page,” said Mariel. “Heffy says he’s brewing some tea. There is absolutely nothing funny about brewing tea, Mickey.”

“It’s only an incidental line,” said a writer named Howard.

“Nothing is incidental in good comedy,” Mariel retorted. “Heffy should say he’s boiling an egg. Now that’s amusing—though offhand I couldn’t say why.”

Choosing the precise year in which my novel is set—though as it happens it’s mentioned only in the blurb, not the book proper—took some care. On the one hand, I wanted radio comedy and talking pictures to be well established by the point at which we enter my version of Old Hollywood. Likewise, I wanted to make sure we were clear of Prohibition (repealed at the end of 1933), so that I wouldn’t have to sneak my characters drinks instead of letting them enjoy their scotch, champagne, and Bloody Marys free of logistical complications.

On the other hand, I wanted to keep my story within the era prior to the motion-picture industry’s serious compliance with the so-called Hays Code—the studios’ puritanical self-censorship agreement that, according to my reference source, had been created in 1930 but did not have an important influence until the second half of 1934. I wanted the entertainment world inhabited by my characters to be the “pre-Hays” world of sexy scenes and madcap comedy. (As noted above, it seems to me that comedy, for whatever reason and sex aside, became less whimsical in the Hays era, generally speaking. Even the Marx Brothers became a little stodgier.)

Let’s take a look through that window … into the home of screen idol Lila Lowell, where a group of my characters have congregated.

“The show Friday night was fabulous,” Nanette continued. “I don’t mind telling you we listened to it in bed.” She stroked Lila’s thigh through her kimono. 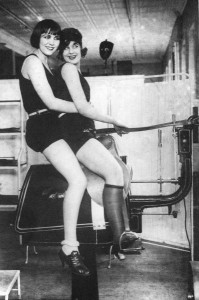 She shivered erogenously while she spoke. For his part, Artie found that he had his hand in his pocket, and that he was discreetly tickling his cock to the rhythm of Elyse’s voice.

She turned to him now. “Can’t you just see them, Artie? Undressed and exquisite in bed, touching each other and listening to me—perhaps visualizing me there with them?”

Artie figured Elyse was about the only person in the world who could say something like that without sounding remotely egotistical. Remarks like this were all in a day’s work for a sex goddess.

Nanette made eye contact with Lila, who nodded again. “Would you like to see that, Elyse?” Nanette asked.

Mariel gently elbowed him, snickering. “The question was not addressed to you.”

Elyse was already squirming in her checkers chair, with a palm situated suggestively at the apex of her legs. “You would let me be there while you loved?”

“You’ll just have to bring a chair into the bedroom,” said Nanette. She looked inquisitively at Lila, who grinned shyly, and then at Artie. “Okay—three chairs.”

“I told you Lila would quickly become comfortable with you,” Mariel said to Artie as they carried the furniture down the hall.

When the two women reclined naked on their bed, their appearances were thrown into an aesthetic contrast. Lila, as every moviegoer knew, was tall, black-haired, and thin, with breasts like small scrumptious pastries and a round little bubble of an ass. Nanette, in turn, was blonde, compact, and on the voluptuous side. And although, by her own account, Nanette had left the tub long before Miss Lowell, Artie noticed that she still looked positively ripe from her bath, lusciously warm and rosy, while Lila looked stunningly sepulchral as always.

Their bodies faced each other; their heads, framed by deep purple pillows, faced Elyse, who had stripped to her underwear before posing on a chair at the foot of the bed.

“Isn’t it clever,” Mariel said to Artie, “how the best entertainment in Hollywood occurs behind closed doors?”

The year is 1934, and amiable New York gag writer Artie Plask has taken the West Coast plunge. His first day on staff with a top radio show introduces him to the irresistible Mariel Fenton, a wit among wits who immediately takes an interest in all aspects of Artie’s life—especially his private life. As Artie finds his feet in a world of blustering comedians, pansexual sex goddesses, timid screen legends, exhibitionistic scriptwriters, and self-infatuated geniuses, Mariel leads him on a zany journey up and down the pleasure dial—a giddy romp through Hollywood that’s chock-full of airwaves showdowns, writing-room counterplots, devious impersonations, naked meetings, and a sensuality-drenched assortment of erotic escapades. 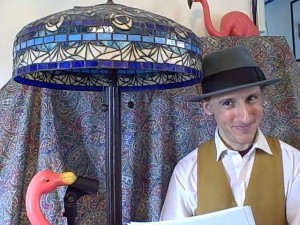 The Gift of ‘Outside’ → ← Editor of Seducing the Myth, Lucy Felthouse, Wearer of Many Hats