The Gift of ‘Outside’

For Blissemas, I decided to talk about Christmas Past and the best Christmas gift ever in the history of Christmas gifts — the gift of Outside. That gift came topped with a bow, all wrapped up in a box with a pair of ice skates. Those ice skates changed everything for me, from the very first time I put them on and wobbled out onto the ice. Suddenly the fun moved outdoors for the winter, and I engaged with the cold deep months in northern Colorado in a way I never had before.

I lived in a very small town. With its three taverns, four churches, a general store and a bank, it was a gathering place for ranchers, miners and timber workers, not much more. There was a small skating rink that some of the local men had dug and paved. It was really just a scrape in an empty field. Next to the rink, they had built a three-sided shelter with benches for putting on skates. In the centre, they placed a fifty-five gallon barrel with the side cut out, which served as a stove to warm chilled noses and fingers. That was it really. But it quickly became my favourite place.

Skating was fun in the short hours of daylight, but I especially loved skating on those crystal clear nights when the moon was full and the air practically crackled as you breathed it. The snow shown like a sequined blanket covering the fields, and the mountains loomed on the horizon, hulking and tarnished silver dark. 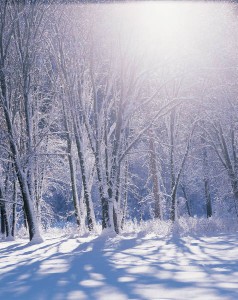 I never wanted to leave. I remember skating on those glistening nights until I shivered all over and my fingers stung through my mittens in the bite of the sub-zero night. But being out there on a pair of ice skates was being out there because I wanted to be. It was completely different from rushing to school or the grocery store or some other place one rushed to all bundled up in down and wool and fleece-lined boots. It’s not that I had conquered nature. No one who lived in that climate was stupid enough to believe that. Every car, every pick-up truck, was equipped with tyre chains, a heavy blanket, a few chocolate bars and a snow shovel. My dad never went out on a long winter drive without a flask filled with hot, thick coffee. We all knew that in the battle with the elements, the northern Colorado winter would win every time. So we were prepared.

But the enemy was magically transformed into a friend on a pair of ice skates. Ice skates made me brave, made me feel a bit like I was walking next to a mountain lion or hugging a bear. The truce was tenuous and giddy and frighteningly delicious, whirling and twirling on the ice with the smell of wood smoke wafting from the barrel stove. Suddenly, at least for a little while, I was in it, I was a part of it. For a little while I could allow myself to revel in something so deadly that most of the time people were afraid to look it in the eye, lest they jinx themselves. But on ice skates, one played with fire, of the iciest kind, and the fire played back. On ice skates the cold winter became warmer somehow. Oh not physically warmer, never physically warmer, but still somehow a little more accommodating, a little more yielding. Or maybe we were all just a little more brazen, just a little more willing to risk a few more minutes while our fingers froze and our noses stung and our toes tingled through our thick woolen socks. 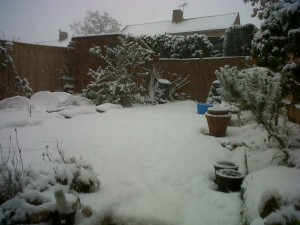 cold. We all knew about freezing to death. You couldn’t live at 10,000 feet altitude and not know, not live with it every winter, every blizzard, every dangerous slip and slide on the icy roads, and the snow packed passes. But when we were on ice skates, while we danced and swirled, the winter danced and swirled with us, it embraced us, it caressed us, it gave us an intimate peek into something so magical, so elementally powerful that even now my heart races when I write about it, when I remember as a kid not understanding why I wanted to stay out way past comfort, why I wanted to feel its icy breath in my own lungs.

It’s fragility, that’s what it is, human fragility. We live daily with the fragility of our thin skin and our delicate insides, and we’re constantly making truces with our environment, but we very seldom ever actually connect with it. We very seldom even think of it other than as an inconvenience. But ice skates changed all of that. I was no less fragile, no less vulnerable, and the truce was still there. But with ice skates, something more was there as well. With ice skates I connected, I really connected to the fabulous, terrible, wonderful ‘Outside.’

I haven’t lived with deep edgy winters for a long time now. But every winter, when we get what little snow we do get here in south England, I think about ice skates. No, I don’t want to go to an indoor rink with piped-in music. That’s really not what it’s all about for me. For me, ice skates were for outside in the darkest harshest months of winter, on a frozen river or a frozen pond whenever possible. Ice Skates were the beginning for me, and after ice skates, well I’ve never really been the same.

Since I can’t give everyone ice skates to celebrate Blissemas, I’ll do the next best thing and give away a choice of a  PDF copy of either of my novels, The Initiation of Ms Holly, or The Pet Shop. Comment to win. All comments will be entered in the draw for the fabulous grand prize kindle at the end of Blissemas festivities.  Don’t miss out.

Happy Birthday, Fannying Around! → ← Jeremy Edwards Shares the Story behind The Pleasure Dial