First in Series Part 4: In The Flesh

August 17, 2019   Tags: First in Series, In the flesh, Medusa Consortium novels, pnr, urban fantasy
Category: Blog   Comments Off on First in Series Part 4: In The Flesh

For the final installment of the First in Series Series, I’m once again wearing my KDG hat, but writing what has become my first love, PNR and urban fantasy. I’m sharing an excerpt from my final series, which is still in progress, The Medusa Consortium tales. Once again, it was never my plan to begin a series when I wrote In The Flesh, which interestingly enough, actually began life as a weekly series on my blog. There are now three books and a novella in the series, as well as several related short stories only available on my blog, along with another novel on the way. As always, be warned, most of my excerpts bite back, even if they don’t have vampires in them. Enjoy! 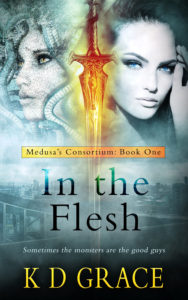 I Wasn’t Alone in the Dark 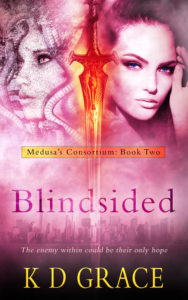 I asked about the Jacuzzi, hoping that would give me another minute. By the time she got started about the sites she’d looked up online and the builders she’d talked to, I was rocking back against the hardness, craning my neck to yield as much bare skin as possible to teeth and tongue and lips all soft and warm and wet and sharp and hard and demanding. Oh, I tried to be as unobtrusive as possible, but looking back, I wonder how the hell Annie couldn’t see? How could she have missed it? But she rattled on and on about some builder just up the road near Keswick who was supposed to be really good, some guy named Michael. Like I gave a fuck.

I was thankful for the extra time, but Christ, how could she not notice me standing there, legs apart, rocking back and forth and shifting from foot to foot like I had ants in my knickers? In truth, what I wanted in my knickers surely couldn’t actually be there, and yet I felt it, fucking hell, how I felt it! I swear, I could feel muscle and sinew. Hell, I could feel the actual shape of an erection as though we were both naked, as though all he need do, this dark being who surely was just my imagination, was bend me over and open me, me struggling to keep my breathing quiet, me struggling to focus enough attention on my friend that she wouldn’t suspect I was about to come. Oh yes, I was terrified. I would have, should have, run, if I hadn’t been so intrigued, so turned on. I just wanted one more second, and then another and another. 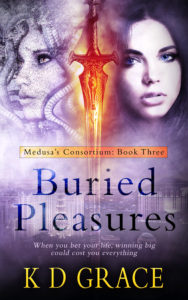 “Susan? Susan, you’re scaring me.” Annie’s worried face invaded my field of vision before she half-blinded me with her Maglite. “Are you all right? What the hell
happened?”

“Sorry, I got a little lightheaded there. Probably just blood sugar. I missed lunch,” I

lied, stumbling quickly to my feet, making a quick swipe at the back of my skirt, surprised to find it was dry. Glancing over my shoulder into the narrow beam of the Maglite, I saw only the empty darkness of the crypt and the tunnel that led back to the rusted barred door. But I was certain someone was there, someone I hungered for way more than I hungered for food. And I was equally certain that I would have Him.