This time next month I’ll be enjoying Eroticon 2013. I’ll be partaking of the feast of workshops on blogging, writing, publishing, photography, art,  sex education, and more. I’ll be taking advantage of opportunities for networking and meeting new people. I’ll be enjoying and participating in readings by erotica authors. I’ll be getting to know in person people I’ve chatted with online. And just like last year, no doubt, there’ll be lots of dreaming and scheming and just flat-out fun. I’m looking forward to seeing more than a few of you there.

I have to admit my knees get a little shaky and I get butterflies in my stomach when I think about Eroticon 2013 because this year, there’s a delicious list of creative writing workshops offered over the two-day period. There’ll be workshops taught by some of my heroes in the erotica writing world – Kristina Lloyd, Remittance Girl, Vena Ramphal, and Ashley Lister. I’m very much looking forward to the opportunity to learn from the best.

So why the butterflies and nerves? Well, because this year I’ve been asked to teach one of the five creative writing workshops at Eroticon! It’s a first for me. I’ve never actually taught a writing workshop before, and I’m very excited to have been asked. And to be asked to do so in such excellent and exalted company is definitely an honour. 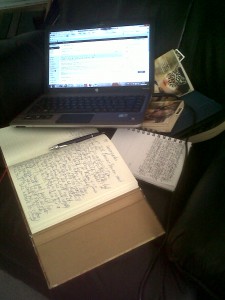 when I’m sleeping, and then I’m often dreaming about it. Yup, I’m a bit obsessive, and to say I’m enthusiastic about it would be an understatement. I hope to bring some of that enthusiasm for sexy stories into my workshop.

My workshop is called Finessing Sex and, while it’s aimed at giving newbies a foot-up in writing and selling erotica, I like to think that everyone can benefit from another peek at the basics — I know I always do. So there’ll be a little something for everyone.

Finessing sex will take writers beyond the slang of the old ‘in and out’ and beyond the biology of coitus to the other levels within the story and the characters where sex takes place. I hope it will show how well-written sex shapes the story and the characters. The session will involve some writing, some brainstorming and hopefully a whole lot of fun.

I also hope to talk a little about how to best make sure one’s story gets and holds the attention of an editor and how to deal with the inevitable rejections that litter the route to those first sales.

For me, writing has always been about fun. I can’t remember a time when it hasn’t been one of the best parts of my life. But finessing that writing, finessing the sex and the story that goes with it is where the real fun begins, and I hope to share the fun on Sunday March 3rd at 2:15 pm.

Get your tickets here: