What’s the greatest sacrifice you would make for love? 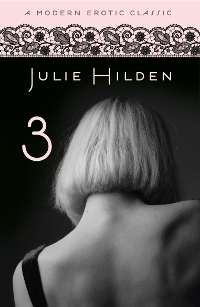 Maya and Ilan have an unusual marriage: Maya will tolerate Ilan’s chronic infidelity as long as he includes her in the affairs. Initially, Maya finds these unorthodox threesomes as arousing as they are disturbing – but when her writing career takes off and she becomes more independent, Ilan feels threatened, and opts for sexual experimentation of another kind: one that plays on Maya’s fear and ultimately threatens her life.

Meanwhile, Maya is drawn into a relationship with a fateful third character. When her new liaison begins to mirror her marriage to Ilan, Maya discovers that her lover, seemingly a stranger, knows far more about her past than she has revealed.

‘Julie Hilden does what few writers can dare to. 3 is smart, sexy, strange and impossible to put down.’ Dani Shapiro

It is the first Saturday in August when I walk up to the porch of the summerhouse and see them. I am supposed to be in the city this weekend but my interview is canceled, the actor called out of town. I see them through the fan propped in the window, through the transparent blur of its blades.

She is moving on top of him slowly, with such concentration that though she faces the window, though she could look right at me, she does not. I am only a few feet away from her. I have never seen her before.

I watch her glossy brown hair shift on her shoulders, I watch her empty eyes as she moves on him with calculation, with slack lips, with nipples so erect that the areolae wrinkle around them – as she moves with such pleasure, really, that who could hate her in this moment?

I watch her, and watch, too, a sliver of Ilan’s narrow chest beneath her, its pattern of hair that breaks across his sternum. I can see the necklace sliding on his chest as they move, the tiny silver hand slipping back and forth, its touch faster and jerkier than Ilan’s own smooth caresses – than the touch of his hand moving on her downy back.

For perhaps five minutes, I don’t say a word. It seems a weird privilege: here is the life I don’t see, the life that goes on without me. I watch them as a ghost watches the living.

Then I say his name slowly, just audibly. She starts and looks around wildly. When she looks through the fan and sees me, she gasps.

Ilan does not start at all; not a flicker. But he lifts his head, sees me, and winces, and just like that he lifts her off him and at the same time off the bed.

She dresses insolently slowly. Her blouse fastens in the back with a line of ties – it is really just a square of cloth that settles on her breasts – and she loops each of the ties into a perfect bow.

‘Fuck you,’ she tells Ilan. ‘You fucking liar. I deserve better than you.’ Righteous anger, but controlled.

She and I brush past each other. It’s as if she’s preempted me with her anger; I want to shout at Ilan too, curse at him, but I don’t have the heart. ‘I should leave too,’ is all I say.

‘Was this the first time – the only time? I need to know.’

‘It started in college,’ he admits, ‘a few weeks after I met you.’

I shiver. I never expected to be chosen by myself, for myself alone. It had felt wrong – unlike me – to be chosen. Now, hearing this, I feel only a sickening familiarity, not surprise.

‘It never meant anything,’ he assures me. ‘I felt awful about it. I don’t know where it comes from. I thought, with enough therapy, I’d talk myself out of it. But all I do is confess, I don’t change.

Look, can we at least sit down? I feel like any moment, you’re going to leave.’

‘Okay, but I’m not promising to stay.’

I sit down on the rattan couch. He stands behind me. I lean back and reach my head up to him – like a rabbit in a cage straining to sip from its water dispenser, the single round, hanging drop. And he leans down, princelike, to kiss me.

Then he starts to touch me. He slips his hands down my jeans, his fingers splayed, rubbing my clitoris insistently, with the slightest pressure. I moan quietly, move against him.

It agitates me as he rubs and rubs, softly, softly. He touches me the way he learned from me years ago – the way I touch myself. He studied it. The detail of his knowledge of me devastates. If I were to close my eyes, I could confuse his touch with my own.

But as he nuzzles into my shoulder, I smell sex in his hair and break away from him.

‘Would you at least shower?’ I demand.

In seconds my jeans are gone, my shirt is gone. He holds on to me, won’t let me leave.

He gets a little bleat out of me as he rubs. Then I clamp my mouth shut. Ah, but then I relax it. I begin to breathe in the sex smell in his hair; I begin almost to like it.

‘Maya. Tell me you want this.’

Julie Hilden graduated from Harvard, and earned a law degree at Yale and an MA in creative writing from Cornell. After several years of practicing law, she has now turned to writing full time. Her first book, a memoir entitled The Bad Daughter, was published by Algonquin Books, and she has also written for Slate magazine. She lives in New York City.

The Houdini Girl by Martyn Bedford

Lie to Me by Tamara Faith Berger

Kiss of Death by Valentina Cilescu

The Flesh Constrained by Cleo Cordell

The Flesh Endures by Cleo Cordell

The Ties That Bind by Vanessa Duriés

The Agency by David Meltzer

Meeting the Master by Elissa Wald