An Unexpected Encounter with Magda Gardener

With Blindsided, book 2 in the Medusa’s Consortium series, set to be released September 29th, as you can imagine, my characters and their situations are on my mind a lot. That was never more true than this past ten days while I was in New York City, where Blindsided is set. I couldn’t escape the feeling that I was being watched, shadowed even, by someone who has a lot invested in me getting the story just right.

I hear that you occasionally encounter celebrities while walking in New York City, though I never have. I’ve never
encountered anyone I even knew – at least not until this time.

I was enjoying one of those lovely solitary city walks. I can combine the total pleasure of exploring with a little research along with the chance to be inspired by the walk, which is always a win-win. One of my favorite things to do is walk the bridges. I love to meander down to Lower Manhattan, slip into China Town’s manic hustle and bustle and then step back out of it onto the gloom and concrete of the Manhattan Bridge. Unlike the bright and airy Brooklyn Bridge that feels almost like it’s suspended above the water on gossamer wings, the pedestrian walk over the Manhattan Bridge is flanked by the noisy clatter and clang of the subway. There are no views off to the left, except for the frequent and noisy trains, sandwiched between traffic crawling over the highway above and steel girders plunging into the East River below. 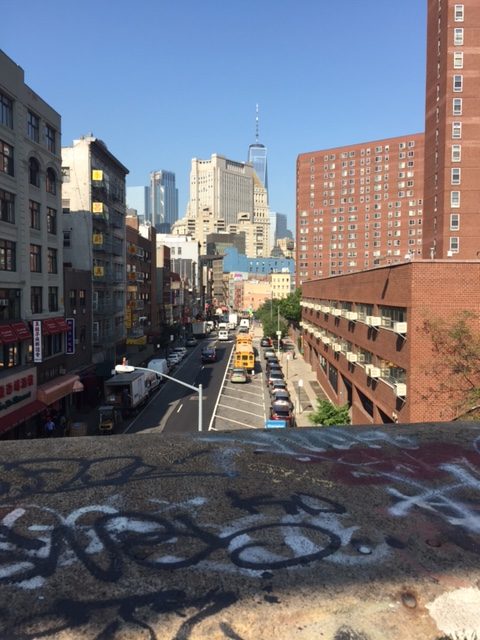 To the right the river view is compromised by sinister stretches of high wire fence. I keep coming back not for the glorious views, but for the gated off concrete alcoves and pillars that mantle sections of the walkway in deep shadow and drive an overly active imagination like mind into sheer ecstasy at the story possibilities. While I adore the Brooklyn Bridge, it’s not a place of solitude, always jammed cheek to jowl with tourists. The Manhattan Bridge, however with it’s sparse influx of tourists and its tatty, seen-better-days but totally practical look, inspires me to darker, grittier thoughts.

I hadn’t gone very far this time until I had that prickly sense of being followed. Not much of a surprise on the darker, more sinister stretches of the bridge. Even in broad daylight, the place feels a little bit dangerous. Those slightly dodgy sections are the reason I love the bridge, the reason it inspires me. A train rumbled by to my left and the feeling intensified. I stepped aside and let two runners and an elderly Chinese gentleman pass me. I was safe here. No need to worry. 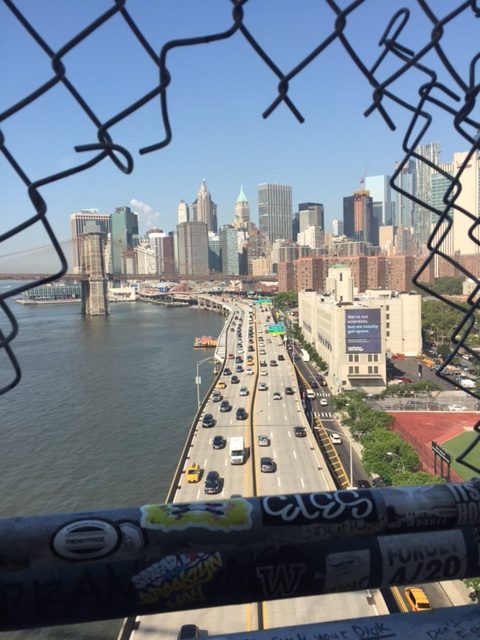 Photos are hard to take on the Manhattan Bridge because of the heavy cross-hatching of the wire fence, so imagine my delight when I came to a spot near the center of the bridge where someone had torn a hole in the fencing just large enough to get a good photo. I was so caught up in capturing images that I forgot all about that feeling of being followed until I felt a sudden chill crawl over me, and for an instant, I could swear I saw my breath rising in icy puffs. It was eighty degrees already, so I knew of only one thing that would put a chill in the morning, or should I say one person.

“Magda.” I didn’t turn around. I’m neither brave nor stupid. The air around me warmed and I felt the heat of her body as she sidled up next to me.

“KD.” She returned my terse greeting. I could almost hear the smile in her voice. “Thought I might find you here. I’ve heard you’re quite fond of this bridge. I rather like it myself,” she added. “And Desiree, well that bitch has some chilling tales to tell about experiences of this bridge back when it was being built. A walking history book of the city, that one is. Most of it she was there for.”

“I sort of suspected she’d been around awhile.” I risked a peek at Magda’s feet, surprised to find her in soft leather sandals, toenails painted a bright shade of coral. 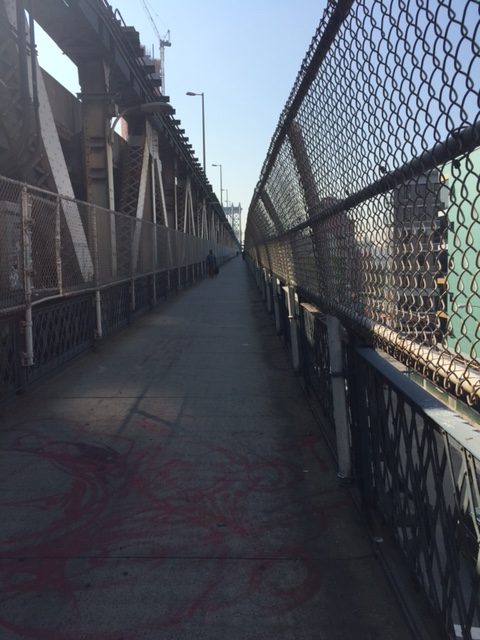 She followed my gaze, then chuckled. “I do enjoy a little summer heat now and then. I don’t get enough of it in the Lakes.” Then she huffed out an irritated sigh. “Oh for fuck sake, KD, don’t be such a wuss. After all I’ve allowed you to write, if I was going to make a statue out of you, I’d have done so a long time ago, and I certainly wouldn’t be doing it in the middle of the Manhattan Bridge.”

“And the little chill?” I asked, still not looking at her. Frankly it took all the courage I could muster to confront her.

I felt more than saw her shrug. “Oh that’s nothing, just a friendly little reminder that you’re playing with the lives and the hearts of my people when you tell their stories.”

“They tell their stories,” I replied, still trying to keep my knees from shaking.

“Exactly my point. As long as you let them tell their stories, as long as you don’t try to rewrite them, you’re perfectly safe with me.”

“I’m not Susan,” I commented, finally getting up the courage to glance around at her. “I can’t make something reality just because I write it.” 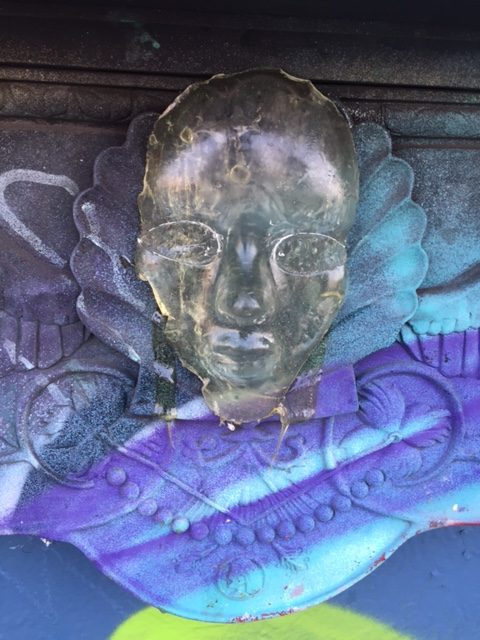 “Can’t you?” She took me by the shoulder and turning me to face her, and for the briefest moment, I felt as though the bridge was collapsing beneath my feet. Then the world righted itself and I found myself looking into the face of the most beautiful women I’d ever seen, eyes hidden beneath a pair of Ray-Bans. She wore her long locks in the usual careless black ribbon. Honestly, she could have passed for a tourist in a calf-length turquoise sundress exposing porcelain skin that on any other person would have been sunburnt red in no time. Somehow I doubted that was a problem for Magda Gardener. “What do you think storytellers do, KD? They make what’s in their imagination real.” She offered me a quirk of a smile. “At least to everyone who reads their stories. And that’s a lot of power for one person to wield.” She nodded me forward and we continued on across the bridge.

Neither of us said anything as a train rattled by to our left, and when it had passed I asked, “is that why you came to me, to warn me about the power I have?”

“Maybe I just like your company,” came the reply. “Certainly I’ve been spending a lot of time with you lately. And anyway,” she added, “I can tell by the sound of your voice you don’t believe you have much power. That’s probably more the reason why I’m here, to remind you that you do. Taking it lightly is just as dangerous as wielding it in the way Susan has, in the way she’s been forced to. There are few things more powerful than the written word. The truth in it, the weight of it, even in fiction, can affect change in ways you never anticipated.”

I didn’t respond. She was preaching to the choir here. I always believed that the written language is one of the most powerful tools of civilization and that there’s living, breathing magic in it every time we put pen to paper (or fingers to keyboard) And sometimes that magic is manifest in words we never expected, or intended, to have any power at all. 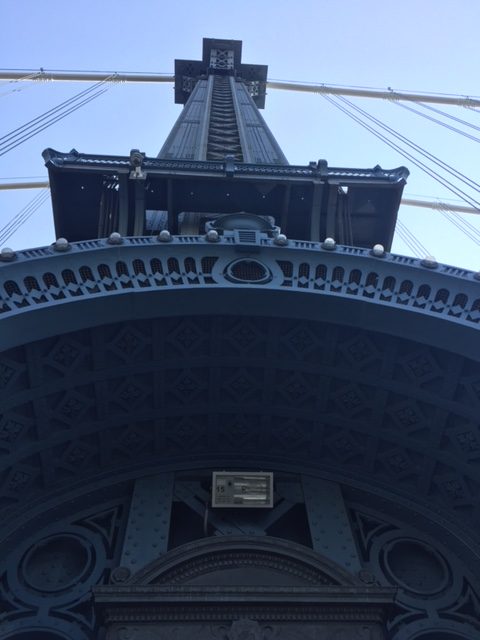 Another train rattled by and a jogger with a Rottweiler on a leash bounded past. “The situation is about to get really hairy. It won’t be easy, what you’ll have to write from now on. You know that?” She said without looking at me.

“I know.” My pulse raced at the thought of what I’d have to write next. “I hope I’m up to the task.”

“So do I,” she responded. That wasn’t exactly the ringing vote of confidence I’d hoped for. Then she added. “I want you to tell the truth. That’s what I want. I’m not sure all of my people want that. Some don’t have truths they’re proud to share.” She huffed out a little laugh and I swear I saw frost around her lips. “I’m not particularly proud of my truth, for that matter, but that doesn’t mean that I don’t want it told.” She nodded. “It needs to be told.”

“Even with what’s coming?”

As we drew near the end of the bridge, there were more people to dodge, more joggers, a few tourists, several dog walkers. We walked on in semi-comfortable silence.

“I’ll be checking in,” she said. “You won’t be left to struggle on your own, at least not for too long.” She looked up and I noticed the black limo waiting at the edge Jay Street.

“One of my own,” came the reply. “Where I need to go is too far to walk. Good luck K D.” She turned and headed toward the limo without asking if I needed a ride. But then she didn’t have to ask. She knew I was walking the story, and it would be a long time before I was ready to head back to Penn Station.

I watched the driver get out and open the door for her, keeping his eyes straight ahead. For the briefest of moments, I thought I saw a snake slide from beneath the black ribbon and curl around her neck almost like a caress. Then she disappeared into the car, and I continued my walk, finding it a little easier to breathe as the limo drove away. 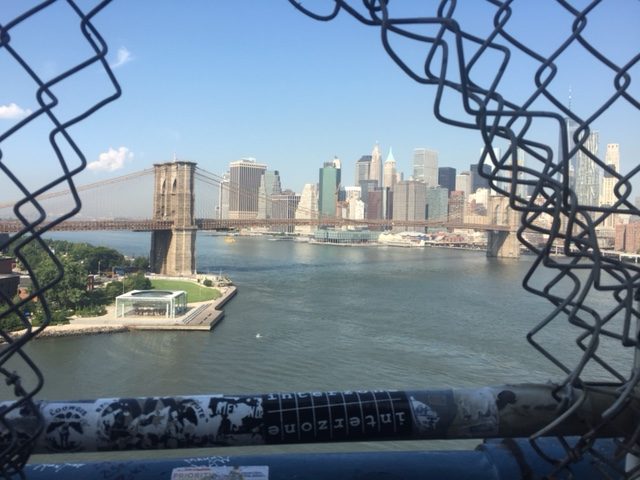 Don’t forget, you can still get your copy of my M/M Medusa’s Consortium novella, Landscapes for FREE by following the link. Also if you want a taste of the first Consortium novel, In The Flesh, you can follow the link.  Download! Read! Be happy!