A Cast From the Past with Bianca Sommerland

I’m very excited to welcome the amazing Bianca Sommerland, who will be telling us about her ‘cast from the past’ in the Story Behind the Story of  Deadly Captive. Welcome, Bianca!

KD Grace is one of the wonderful people I’ve had the pleasure of meeting in my journey as a published author, but she’s the first to ask me a question that really stopped me short. She asked me whether there were personal experiences that inspired part, if not all of my novels. My automatic thought was no, of course not. I’ve been inspired by dreams, by pictures, by music…but my own life? Which of my novels could I actually say was inspired by my own life? Rosemary Entwined, about the descendant of a succubus and her nest of seven men? Deadly Captive, with the woman who’s lost her past and has no one but her fellow prisoner, Joe, to count on while she tries to survive degradation and torture?

Yeah, my life’s just not that interesting.

But when I thought about the question, I took another look at my stories and found certain personalities sticking out, certain qualities that reminded me of people I’ve known. Family, friends, lovers. The characters are all familiar to me because they are the best and worst of real people. Joe, for example, is the grown up version of a boy I had a crush on in high school. He could be so mean, but then he’d suddenly show a bit of kindness and that’s all I would see. My imagination painted him as a tough hero who would be tender with the woman he loved. Of course, in reality he was a player and a jerk and I’m kinda happy he saw me as one of the guys (even though I wished otherwise at the time). Years later, my muse took all I dreamed the boy could be and paired him up with one of my strongest heroines.

I believe many authors find the casts for their stories from their pasts. Only, some of the best memories aren’t Polaroids, or even portraits. They’re like abstract paintings, evoking only emotions. Kinda cool, because you can interpret them however you’d like 😉

And yes, my interpretations are a little twisted. 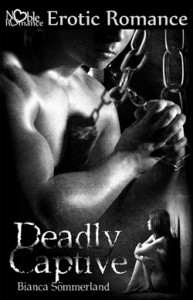 Deadly Captive Blurb:
Lydia awakes, bound and blind, to the whispered urgings of a man who has his hands on her. His words confuse her at first, but she soon understands they are both in the middle of a performance that will determine whether she remains in captivity or dies. The crowd must be entertained, and her cellmate makes sure it is.

Forced submission is not the only horror Lydia endures. She has no memories of life before her imprisonment, and Joe, her cellmate, is her only comfort as the powerful creatures that hold them captive torture and debase her. Together, she and Joe cling to the will to survive long enough to break free and seek revenge. Their desire to sustain one another triumphs over their wardens’ efforts to destroy them. There is no pain, no suffering, that can tear them apart.

Beyond their cell, their love is tested. Can they hold strong in the face of the challenge of the new powers they have gained along with their freedom?

My eyes teared, but my gaze never wavered. “Right back at you. I didn’t sign up for your games.”

He eased his grip on my hair. “Neither of us signed up for any of this, Lydia. I wanted to make sure I could trust my cell mate.”

“Of all the . . . .” I shook my head. “Please, I need to know. Some kind of morbid curiosity, I guess. Why in the world would I fake memory loss? What purpose would it serve?”

With a shrug, he rested his arm on my shoulder, still loosely holding my hair. “It would be a clever sympathy card.”

Damn it, he’s right. I felt the tension ease from my body, no longer feeling very combative. “How do you know I’m not faking it? If I was, it would be pretty stupid to acknowledge my name.”

“No. Actually, it wouldn’t have proven much. It might have made me suspicious, more than I already was. It would be strange that you’d remember your name, but not your own face. I was hoping your reaction would be revealing.” He closed his eyes and dropped his head. “It was, but not in the way I’d hoped. The loss is worse than I thought. There wasn’t even a glimmer of recognition.”

Grazing my teeth back and forth along my bottom lip, I glared at his chest. “It could be an act.”

Fingers under my chin, he tilted my head up. “No, Lydia. You couldn’t have faked the fear I saw. You thought it was one of them.”

I jerked away from him and clenched my fists at my sides. “I’m not afraid of them.”

The way he said my name sent a chill down my spine. I dug my nails into my palms.

He frowned. “Stop what?”

With a wicked smile, he hooked his thumbs in the pockets of his jeans and rocked on his heels. “Lydia.” I swung my fist at his face. He knocked it aside and caught my wrist when I tried again.

“Lydia.” He backed me into the table. My hip knocked the empty plate and it clattered on the floor. Sitting me on the edge of the table, he trapped my face between his hands. My breath caught, and I pressed my eyes shut, expecting him to slam his mouth on mine. It could hurt; my lips were still sore.

His tongue gently traced the crease of my lips. He combed his fingers into my hair and tugged until I tipped my head back. Then, he kissed me so tenderly I opened my eyes and stared at him.

He kissed the tip of my nose. “Why do you look so surprised?”

Why? I licked my bottom lip and tasted the saltiness of his sweat. Delicious. My eyes dropped to the moisture beaded on his chest. I leaned forward. He tightened his grip.

I groaned. “I thought you’d be rough.”

“You keep looking at me like that, and I will be.”

Thanks for being my guest on The Story Behind the Story, Bianca, and thanks for the hot excerpt from Deadly Captive. Sounds like a must read to me.