KD: Even when I first met you, five years ago, you were all about improving the quality and respectability of erotica, bringing it down from the top shelf, as it were. Do you think quality has improved? In what ways? And if so, why do you think that is? 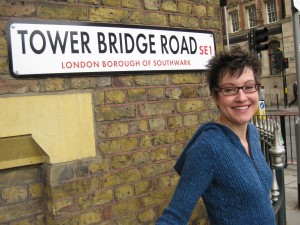 mostly come off the top shelf, a lot of it is still rather top shelf in spirit and still being geared toward the one-handed reader. It’s always been my view that this is very limiting to writers as well as to readers. When you are writing only in this way, you aren’t going to have a lot of substance in the work. The writing should engage a reader on many levels, not just one. You can write something erotic, yet still offer a satisfying and fully developed reading experience. The way I see it, if you’re going to the trouble to write, then write something that has some value to it, not some fluffy piece of nonsense that the reader won’t remember five seconds after they’ve finished reading it.

Mitzi: I don’t ever want to be labelled as writing for a single gender. I hate labels of any sort, as most people know. To answer your question, erotica is becoming more gender specific, not less. The women’s erotica market is and has been getting a big push from publishers, especially with the whole romance thing happening now. I guess they figure men aren’t interested in romance. As for my changing how I write, be it consciously or unconsciously, I very much doubt it would be any different. Besides, I don’t write in the same way all the time anyway. If I did, I’d bore myself, and probably my readers!

KD:  As erotica becomes more mainstream, have you noticed any major changes?

Mitzi: It’s sort of twofold really. At one point I thought we were finally moving toward a more literary direction, but that seems to have reversed itself. Having said that, the genre itself is, as you say, definitely going more mainstream. This is being helped by the fact that, as I mentioned earlier, a lot of romance publishers have started up erotic romance imprints. But the literary element seems to have become lost in the fray. The trend in a lot of erotica seems to be fluff rather than substance. I mean, there’s nothing wrong with light reading, but if it gets any lighter these books will float away on the slightest breeze.

KD: In our correspondence leading to this interview you said what you really wanted to emphasise is that your new novel Pride and Prejudice: Hidden Lusts is not just some “sexed-up Austen.” That’s been done. You said the book is really a historical parody with lots of sex, and probably has more in common with the Zombies book. How could I not be totally intrigued by that statement? Tell us more.

KD: Why Pride and Prejudice? What inspired you to choose that story over others?

Mitzi: It’s Jane Austen’s most popular novel, and the one that just about everyone is familiar with, even if they’ve never read it. There have been many film adaptations made of it, and the recent mashups featuring zombies have really put the book back on the map. It seemed like the most obvious way to go. Taking the familiar and reworking it into something new is good fun for a writer.

Mitzi: Well, as I just said, it’s great fun for a writer to take a work that everyone knows and create something new with it. That’s what I did with the fairy tales. And Pride and Prejudice: Hidden Lusts is a continuation of this. Whether it’s adding a sexual element or any other kind of element – I don’t think it really matters. Many authors have taken pre-existing works and made something new out of them. However, if you want to focus specifically on the sexual element, then we should bear in mind that many fairy tales were morality tales used as a means to warn young girls away from sex. “Little Red Riding Hood” is the most obvious example. Sex was often a back story, albeit discreetly hidden. Same too, for myths (although the sexual element was less hidden). So writers who retell these pre-existing tales by incorporating sex into them are not necessarily corrupting them at all. I found that out when I researched and wrote the introductions for the tales I selected for In Sleeping Beauty’s Bed. You’d be surprised what was in the originals, not to mention just how far back these “originals” go. As for Jane Austen, hey, why not? 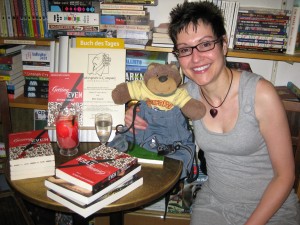 Mitzi: I’ve only seen this kind of dumbing down from UK publishers. Not sure if any US ones do it as well (not to my knowledge anyway). The now-defunct Black Lace had a “practice safe sex” disclaimer in all their books, as have other UK imprints. It’s insulting to the reader, not to mention ridiculous and unnecessary. The problem lies in this whole ghetto-isation of “erotica,” in that it’s made to seem as if it somehow lies outside of literature, the genre from the wrong side of the tracks, so to speak. I suppose the problem also lies in the assumption that anything labelled “erotica” or “erotic fiction” is nothing but a sex aid and/or a masturbatory tool. (Okay, so perhaps some of it is, but some of it actually has some substance and intelligence to it, and is not aimed at one-handed readers.) Considering the explicitness of the sex scenes in a lot of so-called mainstream fiction, this is literary hypocrisy, indeed. You can get away with a slew of things in mainstream fiction, but any kind of suspect content is unlikely to see the light of day in anything labelled “erotica.” I guess readers of erotica are considered so brainless that they’re going to go out and commit all sorts of terrible sexual deeds or spread terrible sexual diseases because they read an “erotica” book. If that’s the case, then we need to label every book being published with a disclaimer, ie violence, crime, humour, romance, etc. I mean, too much romance reading might not be good for you and could cause you to go out and fall in love. And who knows where that might lead? Perhaps stalking, and then murder.

KD: From a literary point of view, and as a teacher of writing courses, in your opinion, how much does a well-written sex scene enhance a story? Does it enhance a story? If so, in what ways?

Mitzi: It enhances a story if it’s a necessary part of the story or an integral scene; it’s a way of bringing the human experience home to the reader. However, if there’s no rhyme or reason to have a sex scene, then there probably shouldn’t be one. The scene should be seamless with the other writing; it should not stick out or be out of place. And yes, it should be well written and written in the same style as the rest of the work. I mean, if you’re writing something highly literary, then for god’s sake, don’t write a sex scene that reads like cheap porn. Unfortunately, a lot of writers just can’t seem to manage this, which is why the Guardian has the Bad Sex in Fiction Award.

KD: Marketing and PR now play as much a part in my writing career as writing. I’m sure most of us struggling to get as much attention for our babies as possible would probably say that. As one of the goddesses of social media with Mitzi TV and with a huge online presence I’m sure we’d all love to hear any advice you have.

Mitzi: Well, be prepared to give up your life and put in a lot of hours. There are no shortcuts. Oh, you can always hire some publicity person to do the job (if you can afford it), but I bet you anything they aren’t going to put in all the effort and hard work that you would put in. After all, who cares more about your work than you do? Paying someone good money doesn’t mean you’ll get great results. You need to really work at this. And it’s not an overnight thing. You have to develop your following as well as develop your contacts – and keep at it every day. You need to live on the Internet 24/7. If you’re the sort of person who always needs to have others around or has to be out and about a lot, then you’d probably better forget it. And if you have a “day job,” your time will be even more limited. So you have to decide to spend those hours you’re not spending working for someone else working for you.

KD: With marketing and PR playing such a major role in your life, along with teaching, lecturing and doing readings, the obvious question becomes, when do you find time to write? Any suggestions for the rest of us on making the best of our writing time?

Mitzi: That’s the hard part, you got that right. It is quite difficult, but if I’m working to a deadline, I somehow manage to find the time. Unfortunately, when you’ve got several viable ideas that you’re trying to develop, it becomes quite difficult. I doubt I can offer much advice to others who are being pulled in a dozen different directions. I keep saying I need to clone myself. I think that’s the only option, at this point.

KD: What inspires you?

Mitzi: That’s hard to say. If you’re talking about my writing, there is no single thing that inspires me. My inspiration comes randomly and there’s no pattern to it.

KD:  What has been your most exciting moment in the history of Mitzi Szereto?

Mitzi: I honestly don’t know. Maybe it hasn’t happened yet.

KD: As one transplant from the US to another, do you think the general view of erotica is different in the UK than the US? If so how?

Mitzi: I think it is, yes. There still seems to be this wink wink, nudge nudge thing going on in the UK. I guess it’s because the majority of erotica published in the UK has traditionally been of the top-shelf mass-market variety, with those really over the top rude covers. They aren’t even trying to attract a more mainstream audience, ergo there’s more of a perception that anything labelled “erotica” is pretty much going to be porn. The US mentality is slightly different, which is probably due to the fact that many US publishers package their books with more mainstream appeal. And now with all the romance imprints jumping into the market (again, mostly US publishers), it’s moving more so away from that top-shelf mentality.

KD:After Pride and Prejudice, Hidden Lusts, What next? 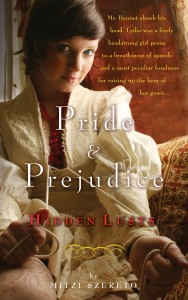 Thank you, Mitzi! It was fantastic to have you as my guest on A Hopeful Romantic. Best of luck with Pride and Prejudice: Hidden Lusts and with Red Velvet and Absinthe.

A Cast From the Past with Bianca Sommerland → ← Lisabet Sarai Shares the Story Behind Her Novella, The Understudy