Holly on Top! A position I Could Get Used To!

It seemed like a small thing, something I wouldn’t have even noticed if the eagle-eyed Lucy Felthouse hadn’t brought it to my attention. I’m talking about an article in the online Fe-Mail segment of the Daily Mail. It was entitled:

The Initiation of Ms Holly was on Ms Cox’s list with a 9 out of 10 rating! Needless to say I was over the moon. I passed on the link to everyone then happily went on about my business until my wonderfully supportive Other Half, who is much more a checker of charts and ratings than I am, since I’m always afraid if I look I’ll jinx it, called to let me know that Holly had suddenly gone to number twelve in the Amazon UK erotica charts! By bedtime last night, The Initiation of Ms Holly was number one on the Amazon UK erotic fiction charts and had made substantial leaps over all in the UK and the US, and suddenly replacing Holly in the middle of the top 100, where it had been hovering for quite some time, was The Pet Shop! Needless to say, It’s been a wild twelve hours! By the time I got up this morning, Holly was number two, just below The Story of O. 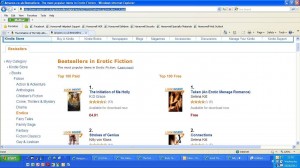 Who’d have ever thought that my getting stuck in a train in the Eurostar tunnel several years ago would end up with Holly on topJ? And to celebrate Holly’s success, I’m including an excerpt from one my most often requested segments when I do a reading from The Initiation of Ms Holly. Enjoy!

Morgan walked around behind Rita to take in the over-all effect. ‘Ever ridden a Harley?’

‘Don’t look so frightened, sweetness. I’ve been riding since I was a pup.’ His lips curled into an edible smile. ‘I promise I’ll make it good for you.’

He knelt and helped her into the boots, lingering to suckle her toes and kiss her insteps before guiding her feet into the soft insides then slowly zipping them up and up and up. At last he stood and held the bomber jacket for her. ‘Our steed awaits.’

Outside a few neighbourhood teenagers had gathered around to admire the biggest, sleekest vintage Hog Rita had ever seen, complete with silver wings painted stylistically across the petrol tank along with the words, Pegasus III. It took her a few seconds to realize that the boys’ attention had shifted away from the Harley. ‘Could we please go,’ she whispered, feeling like she did in her dreams when she found herself suddenly naked at the office or in the queue at Sainsbury’s.

But Morgan took his time buckling her into the helmet, making sure it wasn’t too tight, making certain she wasn’t claustrophobic. When she started to get on behind him, he shook his head, scooted back slightly and patted the leather seat in front of him.

She balked. ‘Isn’t that illegal?’

‘Not if we don’t get caught.’ He patted the spot in front of him again and chuckled. ‘Trust me. It’s the best seat in the house.’

Trying to ignore the mutterings and the stares of the teenagers, she climbed on the Harley in front of him, a little less gracefully than she had planned. Fortunately the resulting blush was contained within the helmet.

Morgan knew only one speed and that was suicidal. The g-force of acceleration strong-armed her back against his chest with a yelp that was thankfully drowned out by the roar of the Hog. It seemed to her that Morgan was taking the fastest way out of town, weaving in and out of traffic with such terrifying maneuvers that she feared heart failure was imminent. They had only gone a few blocks when she gave up shouting at him to stop. He either couldn’t hear, or was ignoring her.

As the traffic lessened, and he headed out the A3, she realized he was controlling the Hog with one hand. The other arm was wrapped low around her waist. There was an electronic crackle next to her ear, and his voice filled the inside of her helmet. They had contact. ‘Just relax, sweetness. This is gonna be so good.’

His hand slid lower on her belly until it rested against her pubic bone where it began to fumble until she felt a tug and a zip, and suddenly cool air bathed a horizontal swath of flesh exposed to the night. ‘I love zippers. Don’t you?’ His voice was like a kiss against her earlobe.

There was more tugging and zipping until she felt the pressure of the cat suit lessen against her crotch, as though she had just split her trousers. She caught her breath.

He swerved to pass a lorry. ‘We’re gonna die!’ she yelped inside her helmet. Then she bore down against his hand and the vibration of the Hog, 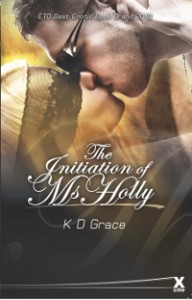 hoping he could keep from crashing until after she came.

She didn’t know if he had heard her yelp, but she wondered if he’d heard her thoughts. ‘Lift your bottom,’ his velvety voice filled her helmet again.

‘Are you crazy?’ She gasped.

‘Trust me. Lift your bottom. Don’t worry. I’ll keep you safe. I promised Edward, didn’t I?’

She held her breath, cursing between her teeth, and struggled to do as he said. She grabbed on to the petrol tank until she was sure her fingernails would dig holes in the paint. Then she squealed as another zipping loosened the hug of the cat suit even further until she was certain the whole crotch of the garment had been zipped away. As if to confirm her suspicions, Morgan’s large hand now stroked her from behind, spreading her lips.

‘Sweet Jesus, you’re slippery, kitten. I believe you really like riding a Hog.’ Then she felt him inch forward on the seat.

He wouldn’t… Surely he couldn’t… ‘Oh my God,’ she gasped. What was crowding against her bottom and nestling up to her pout was too thick and too stiff to be his finger.

‘That’s my girl,’ came the voice in her helmet. ‘Lift your bottom for me. Just a tiny bit more now. Almost there. I’ve got you. I won’t let you fall.’ He tightened his arm around her and maneuvered his hips. ‘That’s it, oh yes that’s the place I want to be. Jesus, Rita Holly that’s some hot pussy you got there.’ Then all she could hear was accelerated breathing followed by a hard thrust that nearly sent her over the handle bars but for the strong arm wrapped around her. And he was in. Her pussy felt like it would split in two from the sudden, unexpected fullness.

‘That’s my girl. Now lean forward. All the way forward and let the Hog do the work. She felt him down shift and the beast rumbled beneath them. With the substantial length of him so far up inside her, she felt physically compelled to lean forward over the petrol tank until she could feel the cool chains of the cat suit pressing into her bare flesh, until her erect nipples felt like they’d drill clear through the tank.

Then with a hard thrust, Morgan scooted forward again, and she heard him sigh. After that the thrusting and maneuvering became much more subtle using the power of the Harley roaring beneath them as the driving force. He had positioned himself perfectly so that each undulation of his hips drove her distended clit against the vibrating leather of the seat. My God, she thought, it was a brilliant way to die.

His breath was soft little grunts inside her helmet coming faster and faster until she thought he must have stopped breathing altogether. The movement of his groin against her became less and less, all the while building in intensity until each minuscule shifting penetrated up her spine clear into the crown of her head, until she was certain the imminent orgasm would surely explode her brain.

When his ejaculation erupted inside her, she felt as though his cock had suddenly expanded to fill the entire space within her pelvic girdle, and her own orgasm tightened and gripped on him until he cried out.

She would have surely catapulted off the Hog with the double explosion in her pussy had Morgan not held her tightly with his free arm, as they sped down the A3 toward the Guildford exit.