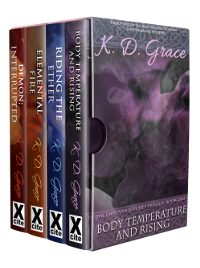 In a room full of people Ferris could remain totally unnoticed. It was almost as though he were invisible. He heard things that way, saw things that others missed. Fiori suspected that was part of his magic. What he was doing to her body was also a part of his magic and way more of a surprise, considering the man’s unassuming nature, than his ability to blend in.

‘Do you want me to make love to you?’ He asked it as simply as a parent would ask a child if she would like a bedtime story. He asked it because he knew in a house where sex magic was practiced, healing came in the form of passion, and she nodded again because she knew that too. His cock was already hard, but then she had noticed that it often was. In those times when he allowed attention to be drawn to himself, in those times when he made his presence known he neither attempted to hide his erection nor did he attempt to flaunt it. It was the ease and the comfort with which he wore his own masculinity that made him seem like a much larger man than he really was. In spite of his chameleon nature, he was not shy by any means, and his stamina and his finesse made him a welcome edition to the beds of all of the Elemental witches and their consorts.