“Velvet Tongue started in February 2011. After many years considering the possibility of hosting an erotic literary event in London, I finally went for it when I was offered a fantastic venue, a sexy little gallery in Bethnal Green (Ten Gales) which, with its smart art deco style, adorned with lots of red drapery, proved to be the perfect setup for such an event. Sadly the gallery closed down and the second edition of VT had to be hosted in a new venue, where Velvet Tongue is still hosted. Luckily this new venue is also very special: the Bar Kick, a trendy sports bar in Shoreditch which, unbeknown to many of its punters, hides a charming little performance space in its dark basement.
For many years, I had been thinking that there was a niche for this kind of soirée. I was not aware of any other event like this in London (apart from an “erotic reading group” that gathers monthly to discuss erotic books) and I felt – rightly as it turns out – that there was a demand for it. Also, I had had experience organizing queer poetry nights (Glam Slam and – in the distant past – Homophone) which I quite enjoyed. But I wanted to try out something a bit more “polysexual” and more varied, including not only performance poetry but also other literary forms and performance approaches. Among events that have inspired me I can mention poetry open mic nights and literary salons in London. But VT is closer to an event called Perverts Put Out in which I once participated in San Francisco. The event, which normally coincides with the Folsom Street Fair in September, gives voice to alternative sexualities and lifestyles (so prominent in the Californian city).
What to expect at Velvet Tongue: If you are there as a member of the audience, the opportunity to hear the stimulating and diverse voices of 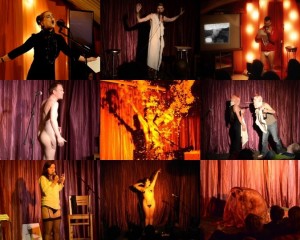 people from all walks of life dealing with intimate aspects of their sexuality.  If you are a writer or performer, the opportunity to present your own erotically-themed material at one of the open mic slots (if there are any available; booking in advance by email is recommended) in front of an appreciative audience. To ensure quality literary standards I always invite three or more guest performers whose work I am familiar with and thus I know are going to deliver something exciting and worth listening to.
In the past two editions, there has been a good deal of flesh exposure, including full frontal, both male and female. But potential contributors should not be scared; rather, they should be excited and expectant at the prospect of performing in front of a warm, open minded and enthusiastic audience.”
Thank you, Ernesto!
I’m way too shy to get my kit off, but I’m not too shy to read about people who aren’t, and to read about all the fun they get up to once they do get their kit off. If you’re in London on Monday evening, the 29th, be sure to join the fun.
Hosted by Erotic Award winning poet, Ernesto Sarezale.This autumn, our featured writers are:
– K. D. Grace (novelist)
– S. P. Howarth (poet)with special appearances by:
Rubyyy Jones (burlesque artist)
& Itzi Urrutia (performance artist)Plus the usual open mic slotsand other surprises still to be confirmed.To get one of the (5 mins) open mic slots: email Ernesto (ernesto [at] sarezale.com).
Velvet Tongue
Bar Kick,
127 Shoreditch High Street, London. E1 6JE
(Old St/Liverpool St tubes)
7pm-10:30pm, £3

More Smut from Felthouse and Blisse! → ← A Kiss in the Dark Can Lead to Hot Sex, Magic and Free Goodies!
© 2022 K D Grace
Site created and maintained by Writer Marketing Services