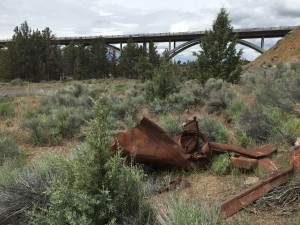 ‘Look how all that water’s soaked in since the rain,’ I point out to my sister as we descend into the Dry Canyon that runs through her town in Central Oregon’s High Desert. Yesterday the rock bed of the shallow spillway looked like a small lake. Now the puddle is reduced to a birdbath for the scrub jays.

‘The rocks are porous,’ she says. ‘Volcanic. Even with a day and a night of heavy rain, it all soaks right in.’ Along the side of the paved path, the soil looks as dry and dusty as it always does, but looking out at the vegetation that’s usually varying shades of kaki and tan and burnt umber everything now has a shining patina of green, and the tiny purple flowers of the low bronze plants, which neither of us can name, carpet the desert floor with color.

A rock chuck gives a sharp high-pitched chirp from somewhere nearby and a scrub jay calls from the juniper tree above us. I catch a flash of iridescent blue in the branches and a flutter of wings. I love this canyon. It’s truly one of the treasures of Redmond Oregon, and some of my fondest memories and best ideas are associated with walks in this
canyon on my annual visit with my sister. The canyon, which was formed by ancient volcanoes, used to be the city dump a long time ago. Now it has a paved walking path the entire 3 ½ mileas well a dog park, a playground and several sets of steep steps into it from street level. It’s wide enough in spots that you can completely forget you’re surrounded 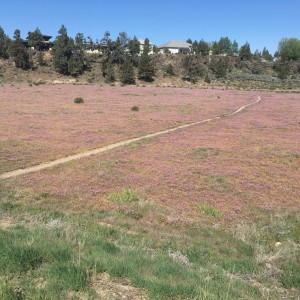 by a town on both sides at cliff-top level, and there’s now a bridge spanning the canyon in graceful concrete arches. I love that you see the occasional deer in the canyon and even occasionally there are mountain lion sightings. I love that the canyon feels like a wild place in the middle of a town of 27,000. But I also love that there are still a few places along the rocky edges where you can find the rusted-out corpses of cars and baling wire and other twisted metal heaps, now mangled beyond recognition, but certainly an inspiration to my imagination. I love that the canyon and the cliff tops that surround it are an incredible blend of wild high desert and human detritus from as long as people have lived on the cliffs above.

As we head into the canyon, a runner passes us, ears muffed in headphones. ‘That’s a tall drink of water,’ my sister says.

‘Where, I say,’ looking around for a large bottle of water, maybe strapped to the man’s hip.’

‘The guy. He’s tall.’ She nods in his direction. My sister has a way with words.

I laugh and watch him as he trots down the walking path, his miniscule running shorts flapping in the breeze. ‘You don’t even want to know where my thoughts go with that,’ I say.

She sniggers, ‘Probably not.’

I’ve already tried out my ideas for my recent mountain lion in the canyon story that I posted last week on my blog, so 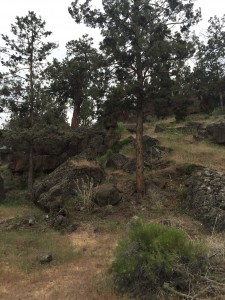 she’s not at all sure how her ‘tall drink of water’ may inspire me.

We walk in silence until we get to the bridge. From there on the canyon widens out until there are places where the trees and rocks hide the housing developments that line the cliffs above on both sides. We’re looking for a crow’s nest I spotted a couple of days ago when I was walking the canyon by myself. The sun was at the wrong angle for me to see inside the hodgepodge of dried sticks stowed into a crevice in the rocks, but the two attentive adults squawking and flapping on the ledge suggested there was a family. Today with this side of the canyon wall in shadow and us armed with a pair of binoculars, we can see that, indeed, there are at least five crow chicks, who look only days away from fledging. We watch in delight the caws and chirrups and furious exercising of young wings until one of the adults notices we might just be paying too much attention to the kiddos and hovers threateningly above us making loud threatening calls. We both decide, observing the poop-spattered side of the cliff below the nest, that it’s best to move on before mummy or daddy drops the bomb.

‘I’ve never seen a nest of crow-babies,’ I say, looking back over my shoulder as we continue on toward the stairs. The part of the canyon walk we do is the wilder end. It takes about two hours round trip and involves the ascent and decent of two sets of stairs – one about sixty steps, the other 109. Good for the old thigh muscles. We walk to the end and turn
back along the canyon wall on an unpaved path that undulates and weaves in and out of the rocks and trees. This is my favorite part. I could be in the woods for all I know, especially with the twitter and chirp of birds around us. Three California Quail cross in front of us with their top knots bouncing jauntily. A golden mantle ground squirrel scurries into the rocks. There’s just enough water in the little brook that passes beneath the trail to trickle softly.

For a long time we don’t talk. We just walk and take it all in. When we’re together, we usually talk a lot. We make up for lost time, but the canyon is a place where we’re silent as often as not because it’s such a great place to hear our thoughts, to listen for inspiration, to feel glad that we chose to walk instead of stay put in the house. I’m thinking about a story that the walk has inspired. I don’t know when it’ll happen, but when we do talk, we’re approaching the end of the walk, up behind the trailer parks, back out on the rim of the canyon. The place is sort of a no-man’s-land. I suspect that if expansion in Central Oregon continues, it may easily be turned into a housing development, but for now, it’s just there. There’s a huge mound of earth, maybe eight feet high, with a shovel thrust down in the top of it. I know for a fact that it’s a place where the kids 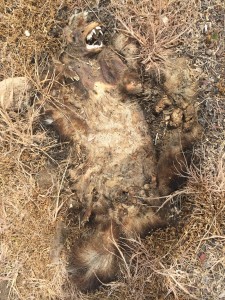 from the trailer park play, but in my mind the shovel is there to bury a body. My sister looks at me askance as though she might be worried just a little bit about the twists and turns of my imagination as I take pictures of it and tell her my story idea.

‘There’s a dead skunk over here,’ she says, motioning me over. Her mind has it’s own strange twists and turns. ‘Stunk to high heaven last fall.’

‘It doesn’t smell so bad now,’ I say, looking at the desiccated heap of flattened skin and bones that I would have missed completely if she hadn’t pointed it out. ‘I want some pictures.’

She steps back and watch as I take pictures of the delicate skull and teeth, visible above the dusty remains of the pelt.

As we step back onto the dead-end lane that leads out of the canyon and back home, there’s an old pickup truck that’s been sitting there, my sister tells me, for months. The back of it’s loaded with a fascinating array of junk. ‘It looks like 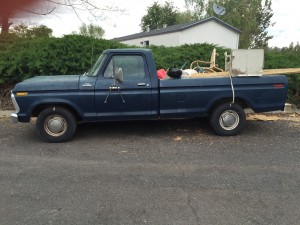 someone was moving and then just deserted everything,’ I say.

‘It’s been ticketed by the police for being left, and then the ticket blew away and it’s still sitting here,’ my sister tells me.

I start taking pictures again. ‘Maybe the owner is buried beneath that mound of dirt back there,’ I say. ‘Maybe there’s foul play involved.’

‘That looks like a rodeo dummy in there,’ she says peering into the bed. And look, there’s a bottle of some kind of prescription drugs in that stir-fry pan.’

I look around to make sure no one is looking and start taking pictures while I tell her my story idea. ‘I think the guy will be running from someone and this is as far as he gets before he gets caught.’

‘But why would he have a rocking chair in the back and all that cooking stuff?’ She asks. 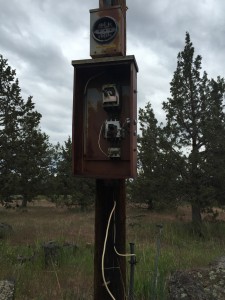 ‘I don’t know, I’ll think of something. Maybe he was a rodeo clown, maybe he had gambling debts?’ I keep snapping pictures feeling slightly guilty for doing it, but not that guilty.

‘There was actually a pair of lacy women’s underwear laying behind the truck at one time. Bright pink.’ She remembers.

‘The plot thickens.’ I say. Someone with a couple of dogs comes up out of the canyon behind us, so I, quick like a bunny, stuff my iPhone back in my pocket and we head on. 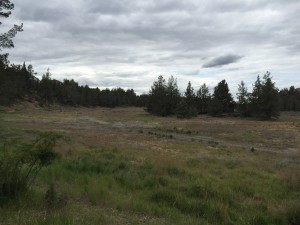 ‘You want coffee?’ she says, as we stomp the dust off our feet on her sidewalk. ‘I want coffee.’

‘Me too.’ I follow her into the house, taking off my boots and pounding them over the rail of the porch to rid them of
dust.

‘Better get you a tall drink of water,’ I reply.

She gives me a dirty look and starts the coffee pot.

One Response to “Two Sisters Walking”