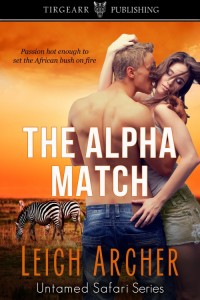 English conservationist, Caro Hannah, and South African, Ben Duval, must work together on a project to introduce endangered wild dogs to an African game reserve, four years after their love affair ended. The challenges of their profession pale into insignificance beside the personal obstacles they must overcome in order to either bring closure to the events of four years before, or reignite a passion hot enough to burn up the African bush.

The Alpha Match is the first in a series set in the African bush where luxury tented camps and romantic hideaways are havens for royals, celebrities and the adventurous at heart. The Untamed Safari Series places unforgettable men and women in this captivating setting and holds its breath as they play out their red-hot passions.

Caro was aware that her voice was rising, but she could do nothing to stop it. Now was as good a time as any to speak her mind. ‘As a matter of fact, if you could stop all the wars on this planet, solve world hunger and reverse the effects of global warming, I’d still feel nothing for you.’

It was the briefest look of pain flitting across his face that silenced her. Then his mouth hardened and his eyes blazed. ‘I’m your boss, Caro.’ He spoke very slowly, his voice vibrating deep in his throat. ‘All I’m asking from you is some respect. Your unwillingness to greet me at the meeting today; that wasn’t very mature, was it? How far do you think we’ll get on this project if that’s the way things are going to be between us?’

Caro was stung. ‘If you think I’m going to be anything other than professional, then you really don’t know me at all. I’ve worked for five years to save the African wild dog and I’d never do anything to jeopardise this project.’

‘Oh, I believe you,’ Ben said. ‘Nobody knows better than I do just how ambitious you really are. As a matter of fact, what was I thinking? Of course you’d never let anything get in your way, least of all other people’s feelings.’

Again he stared into her eyes, his own narrowed and filled with fire.

She could see the cords of muscle beneath the golden skin of his neck. Her breath came in small, silent gasps, and she pressed a hand to her chest.

Ben’s gaze travelled slowly from her face to the hand against her naked skin. He opened his mouth, closed it again. His body tilted towards her, his fingers heading for the bunch of towel between her breasts. Then he snatched his hand back, shook his head, turned and started for the door.

Leigh writes romance novels set in her native South Africa. She has always had a love affair with Africa’s wild open spaces, the intensity of its people and sunsets. Her love of storytelling began as a child when she spent every spare moment playing barefoot in golden grass, watching meerkats, learning to track spoor and dreaming up heroes and heroines dynamic enough to stand out in all the beauty and drama of the African landscape.

Always in search of adventure, Leigh’s journey as a writer has taken her from journalist to communications specialist, and now novelist.