The Power of The One

July 27, 2014   Tags: inspiration, psychology, reading, writing
Category: Blog   Comments Off on The Power of The One

Like most writers, I spend a lot of time analysing what makes a story work. Why does one story grip me when another doesn’t? Why do the characters in one tale make me want to curl myself around them and never let them go while others feel more like they’re only people waiting at the bus stop with me, people who barely register in my mind.

How much of what makes a story work is plot and how much is character? Sometimes nothing happens in a story, and I’m enthralled. At other times everything happens in a story, and I don’t care. Am I just picky? I wonder if in the age of free Kindle downloads, being spoiled for choice hasn’t jaded us so much as it has left us frantically searching for The One. And the stories that really do work for me are the stories in which I most fully experience the power of The One.

It seems to me that the power of The One is more evident in erotica and romance than it is in any other genre. I suppose that sounds really obvious in a Cinderella and Prince Charming, or best fuck ever sort of way. At the risk of over-simplifying, it’s all about being The One, finding The One, enticing The One, seducing or being seduced by The One. Happily ever aftering with The One.

In our need to connect, in our need for intimacy, it seems to me that the power of The One draws us more than any other element of story. It isn’t so much the need for a knight on a white horse as it is the need for a kindred spirit, as it is the need for someone who groks us, someone who gets us on the deepest level of our quirkiness, our flaws, our potential, our Oneness. The archetypal story is that The One goes on a journey that no one else can go on, and on that danger-fraught journey, The One finds The Other One, the only Other One who really gets him/her, who is the flint to The One’s steel. And the resulting fire is what propels the story, what takes the reader in and entices her into her own place of Oneness. Hearts and flowers – maybe. Best fuck ever – could be. Magnetic connection – bound to be.

The thing is, not everyone’s fire is fueled the same way. One person’s One is another person’s bloke at the bus stop. The story of The One can be a game of substitution in which our minds edit out the hero/heroine and insert ourselves making the story about us. WE become The One. Or the story of The One can be more of a voyeuristic menage in which we find ourselves happily inserted into the relationship, experiencing a bit of the hero, a bit of the heroine, and basking in the chemistry that happens in the space between, when two Ones collide. I find this to be more of a 3D way to experience The One. In a lot of ways that space in between, that joining place where the rough edges rub up against each other is the real One. The joining place is the space in which the two become a different kind of One.

The tale of The One is the mathematics of story. The One plus the Other One equals One, and that One is
the Whole, the plurality of One. 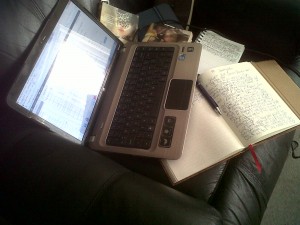 The tale of The One is the physics of story. When the One fuses with the Other One, they join together to form THE ONE. That fusing results in a release of energy, energy that feeds the reader, energy that drives the story.

When The One reader finds The One story, the energy released can change the reader’s internal landscape. The constant search for The One story by the reader is a treasure hunt that can change everything. Every reader has experienced that post coital bliss of indulging in The One story. It’s chemistry, it’s fire, it’s magic! It doesn’t happen often, but every time it does, it’s enough. It’s enough to drive us on in search of the next One