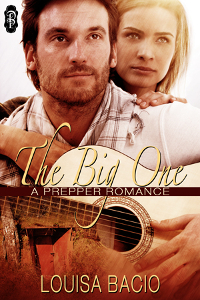 The last thing marketing assistant Kayla Morgan expects to do on a Friday morning is give a tour of her emergency shelter to a flighty rock star. When her boss orders her to play nice, she acquiesces.

Sebastian Cox, lead singer of The U.K. Underground, finds the American bird with the bunker in her backyard more than wacky, but the band’s looking for a location to shoot their latest video.

When an earthquake strikes, the unlikely couple gets trapped and finds a few ways to keep themselves busy. Once reality sets in, will their differences leave them on shaky ground?

Available via Amazon, Amazon UK, Decadent Publishing, ARe, Barnes & Noble and other eRetailers.

“You want out of here? Fine, go for it.” Kayla pointed toward the doorway. “Be my guest and try to break the lock. If you succeed, I make no promises to your safety out there. We don’t know what’s happening. Maybe this was a minor shaker, or maybe the real thing, but what’s it going to hurt to sit tight and figure it out?”

“You plan on helping me pass the time in a more enjoyable manner?” He wagged his eyebrows at her, and despite herself, and her promise to have a strong will, a flutter started low in her belly. She couldn’t be attracted to him. He was such a neophyte. People like him never understood her.

“You watch yourself there.” She turned around and stalked to the other side of the room. Okay, given they were in such a small space, there wasn’t any getting away from him at the moment. He—and people like him—made her so mad.

“What about being optimistic?” he asked. “Thinking about the best in people. Self-fulfilling prophecies and life affirmations?”

“You can be positive all you want, and it’s not going to fill up your tank of gas. Having money, in smaller bills, hidden in case the banks crash and your ATM card doesn’t work—that’s being prepared. Just because I believe in reserving some supplies doesn’t mean I willed all this to happen. It did, and I’m ready for it.”

“‘Reserving?’ Is that what they’re calling it nowadays? I thought it was more akin to hoarding.”

Hoarding? He really didn’t get it. His comment hung in the air, and she did her best to ignore it. No matter what she said, the scorn from nonbelievers hurt. She grew up with her father being harassed by family members. It was only a matter of time before it was her turn. And her sister? Well, forget about telling her anything about being prepared. Maybe as destruction hit and a certain segment of the population was taken out, they’d be all gone. All that would be left would be those who’d taken the necessary precautions.

A wave of dizziness at the implications hit her, and she sat back down.

Bacio shares her household with a supportive husband, two daughters growing “too fast,” and a multitude pet craziness: Two dogs, five fish tanks, an aviary, hamsters, rabbits and hermit crabs. In her other life, she teaches college classes in English, journalism and popular culture.