The Pet Shop: A Free GIFT

I’m very excited to announce a free taste of my critically acclaimed novel, The Pet Shop! Alongside the original novel, The Pet Shop is now being offered by Xcite in a limited Kindle edition three-part series. The first part, The Gift is available for FREE for the next five days on Amazon beginning on Saturday 16th June. And, since Xcite is only too aware that Pets are addicting, to help feed your addiction for hot kinky romance, Part Two, The Secret Life of Pets, and Part Three, The Taming, are just £.77 each in the UK and $1.19 in the US. 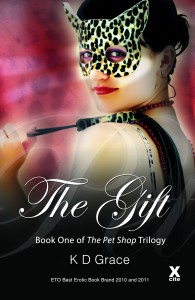 In appreciation for a job well done, Stella James’s boss sends her a Pet – a human Pet. The mysterious Tino arrives equipped with a collar a leash and an erection, and Stella quickly learns that keeping Pets, especially this one, is extremely addictive. Will a chance meeting with reclusive philanthropist, Vincent Evanston, who looks an awful lot like Tino, but couldn’t be more different, double Stella’s pleasure or just be double trouble?

About The Pet Shop

The Pet Shop is a modern retelling of Beauty and the Beast. In part, the theme of the story is our effort to understand the beast that lives within all of us, to tame it and make it acceptable to polite company. Of course in the taming of anything wild we run the risk of losing that wildness that compelled us to love it in the first place. The Pet Shop explores the effort to find a balance between the two.

I’ve always been fascinated with our animal nature, and I’ve often wondered how much of that nature is ancestral behaviours reasserting themselves and how much of it – especially from the standpoint of the human pet situation I’ve created in The Pet Shop, is simply a need to be loved and adored, and to be able to trust someone enough to give up control to them.

Beauty and the Beast and my retelling of it in The Pet Shop are both about seeing the true nature of a person, with all their flaws and neuroses, and loving them anyway. But ultimately the story is also about trusting enough to allow oneself to be loved, and believing that one is worthy of love, warts, blemishes and all.

The pet only looked up at her with adoring and expectant eyes.

‘I’ll gladly give you taxi fare home, of course. I mean that’s the least I can do. None of this is your fault, after all. Anne told me that you were a gift, so I assume you’ve already been paid.’ She raced through the last sentence breathlessly, her face burning at the very thought that the company had paid for a prostitute for her.

Did they really think she was that desperate? And never mind how desperate she was, surely she had worked at Strigida long enough for them to realise this was not the gift for her. And she was bloody well certain Anne knew that. There would definitely be words when she returned from Bath. ‘Is that all right, if we do that? If we just call it even and I get you a cab home?’

Tino made no response. Instead, he rubbed his cheek affectionately against her leg and moved to sit back on his haunches, a position that made 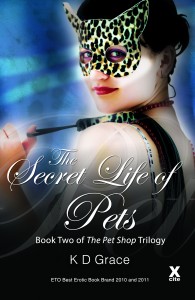 his erection look even more enormous, bulging heavily against his thigh. At the sight, her stomach muscles tensed low and tight and her pussy clenched and half convulsed.

‘I forgot,’ she looked down at the manual still gripped in one hand, ‘Pets don’t talk. But since I really don’t want a Pet, couldn’t you break the rules just this once?’

He brushed her leg again with his cheek, then with his lips, making delicious shivers run up her spine.

‘Guess not. OK. Well, I realise this is an awkward situation, Tino, and I’m really sorry about that. I know you’re expected to stay here. I appreciate your position. Really I do. I’m sure we’ll get through this if we work together.’ She nodded down the hall. ‘I have a guestroom. You’re welcome to sleep there. It’s small but comfortable.’ He followed her on silent feet, and looked on as she showed him the guestroom.

‘The closet’s there.’ She pointed. ‘Though I guess you won’t need that. Extra toiletries are on the dressing table there. Those you might need. And the remote for the telly, well it’s a little tetchy. Here let me show you.’ Suddenly she realised he wasn’t paying any attention. His gaze was locked on her – more specifically on her crotch. She blushed hard and forced a smile. ‘Never mind. I imagine you can figure it out if you decide you want to watch telly. Anyway, make yourself at home. Are you hungry? Can I get you something to drink?’

Again, he plopped down on the floor. This time he wrapped his arms around her leg and began to rub his cheek against her thigh.

She found herself blushing again at the sight of his heavy hard-on. ‘I’m sorry. I didn’t think about how … uncomfortable you must be. I know you’re not allowed to touch yourself unless your keeper gives you permission, and, well, since we can’t, since we’re not going to …’ She nodded to his cock. ‘It’s all right with me if you do what you need to do. You know, for some relief.’ She felt like her face would burst into flames.

For a long moment he looked up at her with his bottomless cinnamon eyes, as though he couldn’t quite comprehend what she wanted of him. Then, slowly, carefully, holding her gaze, he laid a hand against his cock and ran a curled palm up the length of it. A shudder ascended his spine. He threw back his head and released a trembling breath that ended in a deep animal groan at the back of his throat.

Almost before she realised it, she replied with a little whimper of her own that slipped between her lips. Her nipples pearled through the thin 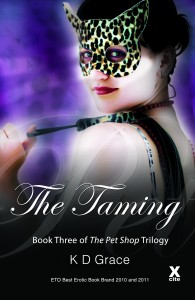 silk of her blouse, and her pussy felt slick and giddy. She closed her eyes only for a split second, but the next thing she knew, Tino was standing beside her, so close that her hand, resting low against her belly brushed his cock, and they both gasped at the feel of it. Before she could do more than marvel at the velvety softness that felt like it sheathed granite, he pushed in closer, and his large hand engulfed hers easing it gently against his cock with just enough pressure to encourage her fingers to wrap around the girth of him.

She should have stepped back, she should have commanded him to stay in the room and do what he needed to do and not come out until he was done. But she didn’t. Instead she curled her fingers around him and felt his hand tighten over hers. She expected him to hump like a dog, but he only stepped closer, engulfing her in a feral scent not unlike cat fur on a sunny day.

The shifting of his hips was almost invisible but for the tensing of the muscles low in his hard belly, tightening and lifting until his soft pubic curls just grazed the inside of her wrist. Instead of the blatant sexuality she expected, he simply laid his head on her shoulder, his warm breath raising the fine hair along the back of her neck. His heart hammered a heavy drumbeat that matched her own, and her nipples seemed to be pressing ever forward to get nearer to it.

His free arm encircled her, resting just above her hip, where his hand moved in a gentle caress up and down her ribs, almost tickling. The sensation of it all accumulated warm and heavy just below her belly. The heat of his lips rested close to the pulse of her neck. They were slightly parted, his breath coming in fast little puffs.

She knew she should be pushing him away, making him bend over for the spanking a misbehaving Pet deserved. She hadn’t asked him to touch her, and she hadn’t volunteered her services. ‘You’re a very naughty Pet, Tino.’ She barely managed to gasp before he tensed, and a strangled groan escaped his throat just as his cock twitched and she felt the silky slick heat of his come spill over both of their hands and against his bare belly. Then his whole body convulsed, and involuntarily he pulled her tight against him, an act which sent her into her own convulsions. She let out a startled cry. She hadn’t expected to come. She hadn’t intended to come, and yet there she stood quivering out her pleasure against the Pet, who held her in a powerful, sex-stimulated bear-hug.

Lucky Seven is a Gift → ← Penelope Friday Tells the Story Behind the Story of Her Novella, Just Another Lady

5 Responses to “The Pet Shop: A Free GIFT”