The Fully-formed Birth of Vina Jackson

As I write, EIGHTY DAYS YELLOW by Vina Jackson is no 6 on the Sunday Times bestseller list and has been in the top ten for the last three weeks. 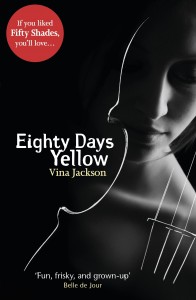 But if a computer hadn’t engineered for two total strangers to sit quite by chance on opposite seats on a train from London to the provinces, John Grisham’s new novel might be no 6 instead and, worse, Vina Jackson would not exist at all!

Vina Jackson is actually two writers, writing together under a pseudonym.  Yet until a few months ago we had never even met.

It all began when one of us was invited to attend a literary festival outside London, while the other decided to attend at short notice and purchased a ticket, on the recommendation of a friend.

So, on a very early Saturday morning as winter was turning into spring, both of us arrived at Euston station, with tickets booked online, only to find a train which was at best barely 10% full and our allocated seats facing each other while the rest of the carriage barely housed half a dozen other travellers. Any of us could have moved elsewhere in the carriage to enjoy more privacy, but then this is Britain and we all probably felt it would be rude to do so.

For hours we all sat together, respectively reading, daydreaming, listening to music on iPods or eating, saying not a word to one another only to discover, several hours afterwards at the literary festival while drinking the welcoming coffee, that the three of us that had all been grouped together by the bookings computer were attending the same event… and had all taken separate taxis from the station.

Several weeks later one of us contacted the other for some professional advice and thus two strangers who had met by chance on a train began emailing regularly.

We were both writers with a penchant for racey romance, and in passing one of us mentioned an unusual story about an antique violin that they’d read in a newspaper. Perverse minds think alike and we both thought there was a stub of an idea for a novel there, ready to be written. And then we moved on to other matters, stories to write, lives to live, other things to do.

A few months passed and the idea to write a novel together  kept bubbling away so we decided to meet up at London’s Groucho Club and later exchanged ideas and suggestions over meals in Chinatown.  And it was then that we agreed to write four opening chapters, in alternate voices, and to then send it to a literary agent to see if there was anything there to interest a publisher.

The literary agent Sarah Such loved the material and signed us up, submitting to London publishing houses within a few days. And overnight 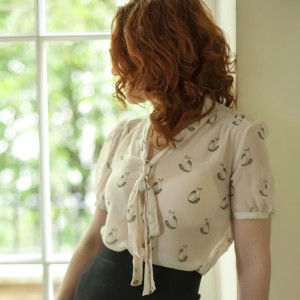 the first offers began coming in. As the level of interest grew, so did the size of the offers as well as the suggestion that it could even make a trilogy. So Vina Jackson agreed to write a third volume, and soon a six-figure deal was done with the wonderful folk at Orion.

By then, of course, the collected works of E.L. James were weaving their magic on the bestseller lists and Orion suggested we could maybe write all three books in 3 months. Vina didn’t protest too much and agreed, to ensure the trilogy would be published within weeks of delivery of the respective manuscripts, and catch the zeitgeist.

The first volume EIGHTY DAYS YELLOW was published in early August, and its sequels EIGHTY DAYS BLUE and EIGHTY DAYS RED are out in September and October. It will soon be published in the USA by Open Road Media and so far has sold translation rights in ten territories, including Germany, France, Italy and Japan.

Meanwhile beware who you sit opposite next time you take a train.  You may end up writing a racey romance trilogy with a complete stranger…

Caught in a frustrating relationship with a man who can’t accept her for who she is, passionate, flame-haired violinist Summer finds release in her music. She spends her afternoons busking on the underground, lost in the works of Vivaldi or Mendelssohn. When her violin is damaged beyond repair, Summer receives a surprising proposition from Dominik, a university professor with powerful desires, who has been captivated by Summer ever since he heard her perform. Dominik will replace her priceless violin, but only if she agrees to play for him in a private concert.

Unable to deny the chemistry between them, Dominik and Summer embark on an intense affair full of daring twists and turns, as unpredictable as it is thrilling. For Summer it is a chance to finally embrace her long-denied dark side, but she’ll soon learn that where there’s pleasure must come pain. And can a relationship born of such all-consuming passion, ever really survive?

Exhilarating, seductive and tantalisingly bold, EIGHTY DAYS is a love story that will leave you breathless for more.

2 Responses to “The Fully-formed Birth of Vina Jackson”