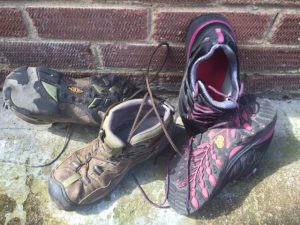 It’s a solemn occasion, one that should be handled with great dignity and serious introspection. Just kidding! It’s actually a happy occasion. It’s time to retire not one, but two pairs of walking boots. One pair has walked across England through bogs and bracken, through bolder fields and fast moving streams. The other has lived fast and dangerously mostly with city walking. From London to Rome, from Dubrovnik to Guildford, they’ve made the winter in-town walks a pleasure for my feet while protecting my delicate knees.

I’m sure a lot of you are scratching your head right now wondering what the hell I’m talking about, but anyone who is passionate about walking will understand. And really, those of you who know me, those of you who have read my bio and followed my blog know that I measure inspiration in boot soles. There! That’s the key! That’s why I’m writing this post. I’m retiring two pairs of boots – one has been with me for the long hard walks; one has been with me only since October, only since I recovered enough from my knee surgeries to get serious about walking again. To me, that’s really exciting. I’ve literally worn them out in six months, and most of that in town because of the winter mud on the country walks.

Since I measure inspiration in boot soles, all I can say it’s been a helluva six months! 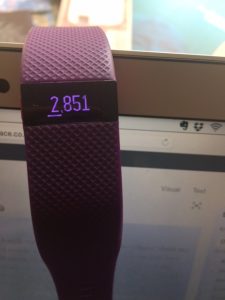 As a lot of you already know, my walking has been enhanced by the addition of a Fitbit to my daily routine, which, at the very least, functions as a reminder to walk ten thousand steps a day if I don’t do anything else, and at the most, challenges me on to walk farther that I’ve ever waked before. By the very act of pushing my walking boundaries, I’ve reached new depths of creativity and new levels of fitness. Why yes! I do love my Fitbit!

One of the best side effects of owning a Fitbit is connecting with other walkers. I’ve had some fabulous walks in London this winter with my good friend and Brit Babes Street Team member, Emma Louise Burbidge. They were walks filled with laughter and good conversation and lots of selfies – Emma is the queen of selfies. I look forward to more city walks with Emma and more laughs and selfies.

But just because I don’t live close to someone doesn’t mean I can’t walk with them. Maybe the very best thing about my Fitbit is that it has connected me with a world-wide community of people who are fitness minded, but especially love walking. I’ve done Work Week Hustle and Weekend Warrior walking challenges with other enthusiasts all over the world. But one of those lovely walkers has a special place in my heart – a woman I admire and adore in spite of the fact that on more than one Work Week Hustle, she has handed me my arse on a platter, a woman I walk with every week in spite of the fact that she lives in New York City! A lot of you know this lovely, talented lady, the fabulous F. Leonora Solomon, who bolgs as F Dot. When I asked her if she’d write a couple of paragraphs for my Boot Retirement post, she happily agreed, so take it away, F Dot!

I love movement, it is a simple but lovely thing. I have never been an athlete, my preferred forms of exercise have been walking and yoga. Very subtle, but both make my body feel fantastic. Before I got my Fitbit, co-workers mused about how many steps I made a day. I easily fell into 10+ K a day…and then I got into a work week hustle with K.D., and watched my steps increase exponentially! K.D. is my hero on many counts because, she is dedicated to whatever she does. When we did NaNoWriMo together, she also helped keep me inspired. It has been the same with our Fitbits.

We have been doing the challenge for almost a month–funny how time flies when you are having fun! First of all, we 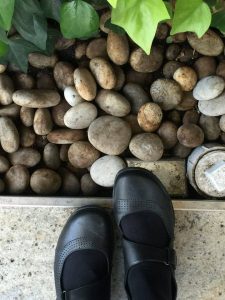 cheer each other on all day. I want her to go as hard as she can, because then it means that I have to go harder. I got fancy walking shoes–they look like Mary Janes but they are powerful! I take time to stop and smell all of the flowers, even though I envy K.D.’s walks in the countryside. But we luckily will be in each other’s countries in the next few months, and I am excited to walk together…and maybe reach our highest step counts ever…together…

Thank you, F Dot! I SO can’t wait to walk with you in the UK and in NYC later this year! Thanks for making what is one of the very best parts of my life even better!

And now I can think of no better way to send my tired worn-out Keens and Hedgehogs into happy retirement than with a little naughty excerpt from a walking related story from the fabulous Brit Boys with Toys Book Bundle and my story Toys for Boys.

At Toys for Boys, Will Charles’ moniker was ‘the Alpha Nerd.’ Doc had read some of his reviews and articles but never met him. Since T4B, as they all called it, was an online magazine, he’d never met any of the people who worked there, and he liked that just fine. The best part of free-lancing was no neurotic colleagues and no idiot supervisor looking over his shoulder. Will Charles reviewed computers, smart phones, and games – rubbish like that, while Doc reviewed all the stuff that gave the outdoorsy blokes a hard-on. It was late in the season to be walking the Coast to Coast, but T4B wanted the walk and the boys toys that would accompany Will and Doc on said walk to be a part of their big Christmas issue, which was always driven by shameless consumerism and chock full of the expensive shit to buy for the man who has everything. The article would be atmospheric, they said. It would be fun, they said.

Alpha Nerd, his left nut, Doc thought. The skinny geek with the expensive looking iPhone could have passed for a twelve-years-old — spotty face, heavy-rimmed glasses and all. Looked like Doc’s dream walk was about to become a 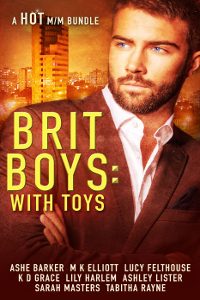 babysitting job for some whimpy-arsed kid who would whine every time he didn’t have a Wifi connection for his little games on his little phone. Doc wondered how the hell the bloke could even heft the backpack sitting on the floor beside him, and those brand new, straight-out-of-the-box walking boots guaranteed major blisters. This was supposed to be twelve glorious days alone on the Wainwright Coast to Coast path across England. This was supposed to be total outdoor bliss. He had been looking forward to it for months and then, at the last minute, T4B ruined it all by insisting Will fucking Charles tag along with his expensive little camera phone to record the event. Bromance, they said. Adventure and companionship, they said. Merry fucking Christmas! T4B didn’t pay him nearly enough for this shit.

“That’s just an iPhone,” came a voice from behind. “This is the device I’ll be reviewing.” To Doc’s horror, he turned to find himself being videoed by a man who definitely passed as an alpha – an alpha bastard at the moment. The sleek black device he pointed at Doc was labeled urBrain in gold letters. Seriously? Were T4B having a laugh?

Doc gritted his teeth and tried to count to ten, but only made it to three. “Perhaps you’d like to turn off urBrain before I cram it up urArse?”

“Day one of the Wainwright Coast to Coast, and after a near disaster,” he spoke for the camera, “I’m here with Caradoc Doc Jones, the Welsh Woodsman and outdoorsman extraordinaire, about to head into the rain toward our first stop at Ennerdale Bridge. Say hi, Doc.” 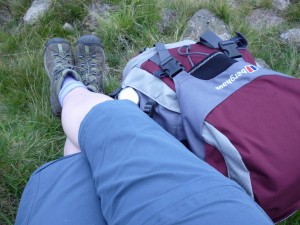 Travel and the Inflight Entertainment → ← Romancing the Chaos

2 Responses to “Retiring the Boots”