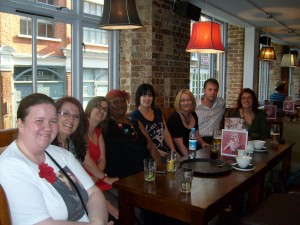 I pile out of the over-heated tube at Old Street Station with my rucksack strapped to my back and my trusty google print-out of the directions to the Thistle City Barbican Hotel, the place I was lucky enough to find on lastminute.com just before desperation set in when every place else was full. The hotel is only the intermediate stop to my true destination, Sh! Women’s Emporium, Hoxton and the smut-reading highlight of the summer.

Yep, another fabulous reading! I’ve been looking forward to this one for ages. Aside from the obvious, that the reading is at Sh!, and I never miss a chance to visit Sh! there are several other reasons why this reading is special. Rachel Kramer Bussel is going to be at this reading, and she’s bringing cupcakes and reading smut! Even better than cupcakes, I get to read with her! Not only do I get to read with her, but I also get to read with some of my heros in the erotica firmament – Kay Jaybee, Jacqueline Applebee, Janine Ashbless, Justine Elyot, and Carmel Lockyer. So you can understand why I’m excited.

Like a woman with a mission, I manage to find the hotel without even one false turn, and I don’t even let the very large, rather disgruntled hen party in queue to check in ahead of me dampen my sweaty spirits. Once I’ve change, freshened up, and put on a bit of slap, I meet up with Kay Jaybee, who is in the same hotel, and we head off to say hi at Sh!, then to the Bluu Bar, which has become the meet-up place of choice for smutters before a read. Kay and I barely get settled in before Jacqueline Applebee arrives smiling and glowing from marching with Pride, earlier in the day. She’s traded in her Doc Martins for cool sandals and a summer dress, and that little twist of a smile she offers tells us we’re in for a treat tonight – nothing less than we would expect. 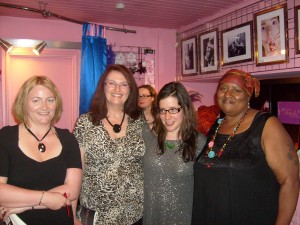 We’ve just commandeered a very large booth when we’re joined by the Lovely Lexie Bay, and the charming Mr. Bay, followed immediately by the fabulous Victoria Blisse down from Manchester, and this time she doesn’t have to take the last coach home! We’ve all just settled in when we’re joined by a yummy woman in black, who introduces herself as Justine Elyot, whose outrageously hot writing as well as online wit and charm we’re all familiar with, but until tonight we’ve never been able to put a face to a name. Tonight we even get to meet Mr Elyot.

I’m in smutter heaven chatting and laughing, talking writing and sex surrounded by so many great writers. And just when I think the company can’t get any better, a lovely redhead, dressed in green, and looking a bit like a wood nymph, stops at our table. ‘Excuse me,’ she says, ‘but you wouldn’t happen to be writers would you? I’m Janine Ashbless.’ And I’m over the moon!

Though I’m the odd one out with my American accent, we pretty much have England covered, with representatives from Devon, Doset, London, Yorkshire, Manchester, and Brighton, then there’s me representing Surrey by way of Oregon and Texas. Such an international world, the world of erotica! 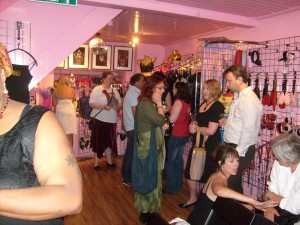 At last we head over to Sh! where Renee greets us with a glass of fizz and Jo, looking angelic in white is busy putting out cupcakes. Downstairs Sh! is a hot pink Smutter’s Paradise, a place many of us have fond memories of previous readings on previous festive evenings. And for those who have never had the pleasure of a Sh! reading before, we know what a treat they’re in for. The exquisitely wicked Lucy Felthouse is not only there ahead of us, but she’s let her hair down for the occasion. She’s in the company of smutter extraordinaire, Rebecca Bond and the delicious Parv Roopray, who can always be relied upon for fab photos of the fun. They’re chatting with the one and only Ruby Jones, living up to her name in a hot red frock.

While Parv snaps photos with tenacious focus the rest of us sip fizz and eat cupcakes, catch up on the latest and wait for Rachel. I’m happy that Rebecca and Parv are both Smart Phone Divas, especially tonight since Raymond couldn’t be there, and I’m certain these two lovelies have already sent a quick photo or two off to Facebook for him to see from Louisiana.

While I’m slipping into my ‘make love to me naughtily’ shoes – made for reading, not walking, I meet the final author of the panoply, the stunning Carmel Lockyer, and the sly, knowing look on her face already tells me that she has a very hot read to share with us. 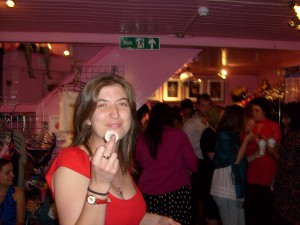 There’s a stirring in the crowd as a half a dozen people straight from Pride with face paint and sparkles join in the party, and the feeling is electric, as we wait. Suraya  Sidhu Singh, editor of the terrific magazine, Filament, is among the crowd, as is fantastic erotica writer and my very good friend, Scarlett French. And just when it’s beginning to feel like if one more person crowds into the luscious Sh! pinkness, the place will burst at the seams in a colourful explosion of collars and whips and knickers and lube, and naughty books, suddenly, there she is, Rachel Kramer Bussel! And wow, she is a fabulous mix of sparkle-goddess and little girl excitement, in a totally approachable package that instantly puts us all at ease, and makes us feel like SHE is actually there especially to meet US!

After Renee makes introductions, Rachel opens with an edgy story called ‘Belted,’ from her anthology, Orgasmic. It’s a story that’s hot and squirmy in an owchie sort of way.

I get to read second, following belts with mirrors and weight rooms and a little girl on girl fun from the Smooth anthology and my story, ‘Muscle Bound.’ From the Gotta Have It anthology, Jacqueline Applebee delights us with ‘Not a Bang, but a Whisper,’ a threesome story that has an outrageously yummy twist. Kay Jaybee regails us with ‘The Advantage of Working From Home,’ and Carmel Lockyer entertains us with the hottest fitting for a bridesmaid dress ever in ‘Crushed Satin Organza.’ She reads it while standing up because she says that’s how she wrote it. Both Kay and Carmel’s stories are also from the Gotta Have It anthology. 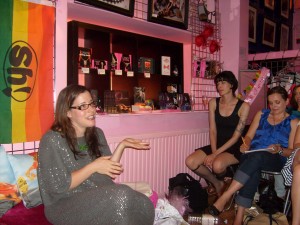 After a break for more fizz and cupcakes and mingling among smutters and audience and whips and lingerie, we get to be the first group ever to hear the phenomenal Justine Elyot read from her hot story, ‘The London O’ in Rachel’s Surrender anthology. I certainly hope it won’t be the last time we hear her read, because her delicious story about vibrating, remote control knickers had us all squirming in our seats.

Then Janine Ashbless took us for a little historic bondage romp with a hotter than hot coming-of-age twist in ‘The Ingénue’ from Best Bondage Erotica 2011. Oh my! And finally Rachel closed with another Gotta Have It offering by Heather Linn, called ‘Seven-letter Word.’ 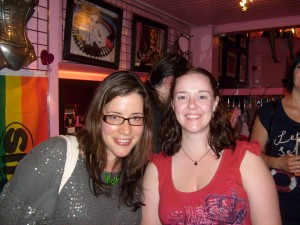 Though Rachel was unable to join us, the party continued at Pizza Express at the table which has, by default become the smutter’s table over the months of reading and attending readings at Sh! I’ve never been too proud to elbow my way in at a seat closet to the middle of the table where I can talk with as many of the group as possible, and there were ten of us. The talk was all on the topics that never get old, the topics we keep coming back to over and over again: writing, sex, creativity, the process that consumes us and makes our lives, as erotica writers, such an interesting dance.

For the most part, we write in delicious isolation, creating a space to work in the midst of real life that takes up the lion share of our time. Though we’re now all connected to each other via the magic of technology, it’s the pleasure of meeting, in the flesh, other people who are also writing stories about connecting on the most basic, most human level that adds to the party atmosphere. That flesh and blood contact makes us feel connected in ways technology just can’t manage, makes us realize that though we may work in sweet isolation, we’re a part of something much bigger, something much more powerful.  And for the few hours we’re together we bask in the energy of it all.

When the night’s over and we return to our real lives, when we seek out our little bits of isolation and the stories that have to be written, we take some of that energy with us and translate it into hot, steamy, vibrant, sometimes dark and gritty stories. But at least for a few hours, we understand that we’re a part of a collective, and it’s an amazing vibrant creative hothouse of a collective that makes our isolation all the more delicious. 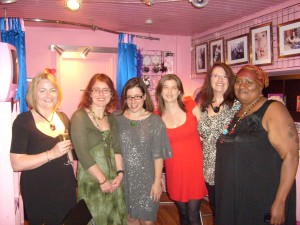 Rawiya Talks Sugar Daddies with a Twist → ← Sizzling Summer Reads Heat Up The Romance Review, and Holly Will Be There

25 Responses to “Rachel Kramer Bussel Showcases Smut for All Occasions At Sh! Hoxton”