I had the pleasure of meeting Peter Birch at Erotica this year. The fellow walker and man of many pseudonyms was dressed like Father Christmas and spreading good cheer, seasonal and otherwise.  I’m delighted that he’s decided to stop by my site on his blog tour promoting the fabulous Pete and Sarah’s Guide to Seasonal Sex. Welcome Peter! 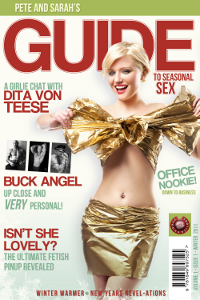 I feel rather good after reading KD’s blog introduction. Now I know I’m not the only person who wanders the English countryside with a glazed expression while thinking out the details of erotic novels. To me, it’s simply the best way to get ideas, create suitably tangled plots, let characters take on some depth, anything really. All ten books of my Truscott Saga (written as Aishling Morgan, just to avoid confusion) have benefited from long walks on Dartmoor, often to the places where the action is set, while whenever my mind jams up a simple walk to the local park is almost guaranteed to clear the cogs. Walking allows me to think in a way that’s impossible when sat in front of a computer.

No doubt some will disagree, perhaps arguing that I’m placing limits on my imagination, but I see experience as a tool to be used in my craft when needed and set aside when not needed. Obviously the scenes with the octopus god in Deep Blue never actually happened, but even then the physical sensations come from real, and fairly unusual, experience. That’s been gathered across years, and it was the experience that I put into my pieces for Fetish Times back in the mid-nineties that led to me being invited to try out a novel for Nexus, Virgin’s now sadly defunct erotica imprint.

My other source of inspiration comes from reading. I’ve always loved erotica and devoured the good the bad and the downright awful from an early age, usually with appreciation but also with a critical eye, and that has had an inevitable influence on my own work, but it’s very much in the background. My style, my plotting, my structure and all the other things that go to make a worthwhile erotic novel more than just a string of loosely connected sex scenes all come from mainstream authors, or those working in other genres, and not just the obvious greats. Saki, Wodehouse, Jack Vance, have all allowed me to learn a great deal, to the extent that I would argue that in order to write, you first need to read, and read widely.

So that’s my formula, lots of naughtiness in brightly lit bedrooms and disreputable clubs, mixed with hours spent buried in books and taking long country walks. I recommend it to you.

Peter Birch has been hopelessly addicted to sex his entire life but has made the best of what society at large sees as a problem. During the ‘eighties, while yuppies were sporting their filofaxes and falking into mobile phones the size of bricks, Peter and his girlfriend were experimenting with the joys of threesomes, dogging and spanking. In the caring ‘nineties he and his wife devoted their time to running sadomasochistic cabarets in London’s more specialised clubs. Finally realising that he needed to earn some money, he took to writing erotica, and has been at it ever since, becoming a prolific novelist, mainly under the Aishling Morgan name, writing guides to kinky sex and dabbling in journalism, which is where he met Sarah Berry.

Editor of Seducing the Myth, Lucy Felthouse, Wearer of Many Hats → ← Hazel Cushion at Erotica 2011 Discusses The Pet Shop