The Initiation of Ms Holly a Top Titillater! 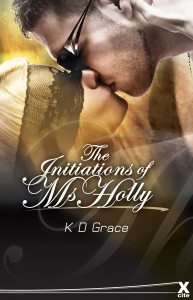 November’s off to an exciting start with lots going on. The news of the day is that The Initiation of Ms Holly is number five on the Stellar Libraries’ list of all time titillating novels! Waking up to that good news, published in the Mail Online’s Femail site definitely made my morning.

From next Friday, the Between the Sheets festival will bring 30 of the top titillating titles to 33 libraries across the country. Watch out libraries, The Initiation is on, and with Holly sharing the shelves with some of my very favourite authors, Justine Elyot, Portia Da Costa and Madeline Moore, and others, you can expect some serious sizzle in the stacks.

Riding the Ether on Tour:

14th Nov: Words of Wisdom from the Scarf Princess: http://wowfromthescarfprincess.blogspot.com/

Blurb for Riding the Ether: 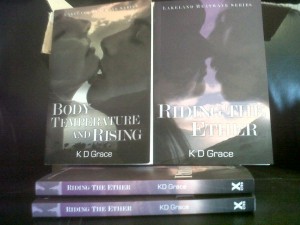 A little Excerpt to heat up those crisp autumnal nights …

(Warning: not for the faint of heart)

And though Anderson did not remember casting the special enfleshment spell, the one he always cast for himself in the Ether, he was fully in the flesh, albeit flesh that only had substance in the Ether. He was completely naked, and fully, nay, outrageously aroused. The pressure in his groin was both agonizing and exquisite. He reached for his manhood, knowing full well he was in need of wit that he did not possess when his lust was so great. But before he could stroke himself to release, a voice spoke out from the Void. ‘That belongs to me.’

He was not startled that the woman appeared out of nowhere. After all this was the Ether, but he was very startled, if most pleasantly so, that she was as naked as he, and it was no hardship for him to look upon her. Before he could utter even a cry of surprise, she knelt next to him, slapped his hand away and took his member into her mouth.

‘My dear woman,’ he gasped as her tongue snaked up the underside of his manhood. ‘I do not believe we know each other.’

She stopped pleasuring only long enough to reply. ‘We will very soon.’ Then she returned her efforts to his great need.

‘I fear this shall end quickly if you do not stop what you are doing.’ He tried, though only half-heartedly, to push her away. After all what manner of man saw to his own release before the pleasure of his lover?

‘I know you.’ As she spoke, she continued to stimulate him with her hand. ‘It may be over quickly this time, but then,’ she lifted her head enough to brush a quick kiss against his lips, enough for him to catch the tiniest glimpse of dark cinnamon eyes. ‘When it’s over we’ll begin again, and then,’ she gave him a squeeze. ‘Then I’m sure I’ll be well compensated.’

She spoke no more, but took the length of him deep into her throat and tightened her grip until there was nothing for it. He shuddered the weightiness of his release into her throat, and she drank it back like fine brandy. And when she had drained him as surely as if he had been the glass containing her drink of choice, she slipped up next to him, her tight roseate nipples brushing against his ribs. And when she kissed him, he tasted himself on her lovely tongue. This time she kissed him with all of her mouth, nay, with all of her body if that were possible, and he felt lust already returning to his loins.

When she pulled away, he spoke in one breathless sentence, fearful that if he did not find his voice immediately, the lady’s own greed for the pleasures of the flesh might make him forget that he even possessed the power of speech, might make him forget why his voice would even be of importance. ‘My dear woman, might I at least enquire who it is that pleasures me so well and in such unusual circumstances?’