New Release: Faustina and the Barbarians by John McKeown 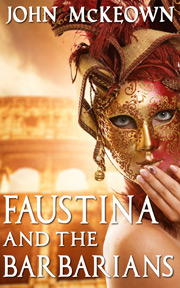 Rome wasn’t built in a day but Faustina Maxima, antithesis of the passive Roman matron, can screw herself out of a threatening situation quicker than you can say, “Veni, vidi, vici!” This statuesque beauty, descendant of a famous emperor is a one-woman sexual killing machine that eats savage Goths and Saxons for breakfast—and is also partial to a Pict or two—while lunch, dinner and supper is any Roman who takes her fancy. Like any great general she’s blessed with imagination, and open to every possibility for maximising pleasure. For, as she writes to her daughter-in-law Flavia, the lucky recipient of her mother-in-law’s unblushing exploits among the barbarians, “what is life without ever fresh adventures?”

Warning: This title contains graphic language and is suitable for adults only.

‘Faustina and the Barbarians’ is a 21.000 words historical erotica novella

My darling daughter-in-law, what thrilling news! The Barbarians at the gates of Rome, at last. You and your friends are in for the time of your lives. I’m green with envy, exiled as ever on this barren Grecian rock with nothing but goats and wizened goat herders for company; not to mention that boring, obnoxious bag-of-bones, your father-in-law Flaccus. As soon as you hear Alaric’s Gothic cavalry pounding down the street, get outside and scream for attention.

Darling, in all earnestness, the Goths are just the influx of virility the women of Rome are crying out for. I speak, as always, from experience.

Twenty years ago, when the Goths first began seriously troubling our northern borders, Flaccus, appointed Legate by the Emperor Valentinian, was sent to keep an eye on them. I, of course, having the ear—and more vital organs—of His Imperial Majesty, was allowed to accompany him. I was a very excited twenty-year-old, who couldn’t wait to feast her eyes upon those blond giants from the far north.

When we arrived it was high summer, and the forests of Germania were steaming, and not just with fires from Barbarian encampments. Disguised as an officer, I rode with my valiant husband into the centre of the Chief’s camp to parlay. Darling, I simply couldn’t see what threat the Goths posed, for all their energy seemed to be spent in fucking their buxom-arsed women, and often each other, senseless. As we rode in, my saddle was damp with the sights we saw. They were fucking against trees, on the ground, and, one couple I remember, were shafting each other precariously balanced in the boughs of an oak. And what beauties they were! As Flaccus did his ‘fearsome Roman’ bit with Chief Athalaric, I let my eyes take in the tall blonds who surrounded our mounted embassy. Long blond hair turned to gold in the slanting rays of the sun, gemstone eyes set above rich, red mouths sculpted for kissing. And do you know, as I sat, looking as martial as I could, one of them met my eye and made a very provocative gesture with his closed fist. That night I lay in our tent stroking myself and feeling those strong fingers probing inside me.

I was well on the way to coming when I heard Delicia, my hand-maiden, scream. The curtains around my bed were torn back and there stood a gang of young Goths laughing, swords unsheathed.

“Oh Aphrodite, don’t let me wake up now,” I prayed as they gathered close, their eyes bulging with lust in the lamplight.