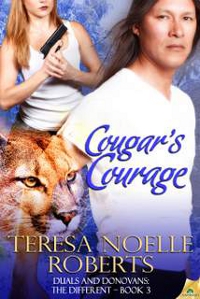 Before I forget, there’s a contest going on. Comment here or at my website for a chance to win an e-book of Cougar’s Courage and an e-book (or print copy if you’re in the US) of Lions’ Pride, the first book in the series. Comment each place for multiple entries. You can even go back to other places I visited on my blog tour! I’ll be choosing a winner on November 20.

Like the other books in this series, Cougar’s Courage has some dark content. My villains are definitely vile, in a murdering, baby kidnapping, inciting-others-to-violence way, and they use kind of magic that enslaves others to their will. Cara has major psychological scars even before the on-screen ugliness begins. Her fiancé was recently murdered, her father drank himself to death, and as far as she knows, her mother was mentally ill and committed suicide. (Turns out the story was even more complicated, though the tragic ending was the same.)

With that kind of storyline and that kind of heroine, I needed the right hero. Shapeshifting cougar shaman Jack Long-Claw is brash, arrogant, and given to humor at seemingly inappropriate times. But he’s a perfect magical mentor for the confused Cara, and eventually the perfect lover, in part because he can help her find light—and light-heartedness—within  her darkness. And despite his occasional obnoxiousness, he’s a good guy. When they’re attacked by enemies during an early lesson, he wants to make sure she’s really okay.

Of course, maybe tucking her into bed himself was asking for trouble…

Jack’s face contorted and he turned aside, racked with coughing. Suddenly he jumped up, ran to the door, opened it on an icy blast of air and, as far as Cara could tell, threw up.

Concerned, she rose from the bed. As soon as she stood, a wave of dizziness struck. She sat down abruptly and called out, “You okay?”

“Hairball,” he said when he could talk again.

“Seriously?” It hadn’t taken too long to figure out Jack was a tease, and despite, or even because of, the dark mood, she wouldn’t put it past him to make up something absurd.

“Seriously. Shifted too soon after grooming. I felt dirty after that fight. Still do, in fact.”

“Me too,” she admitted. “I didn’t even touch those things, but I could use a bath.”

“Me too, even after grooming. Of course we might have to share. Heating up water’s a lot of work this time of year.” He leaned closer.

He’d dropped the blanket when he bolted for the door. Technically, he was dressed—at least, all the most interesting bits were covered—but the shredded jeans and exploded shirt exposed a lot of velvety bronze skin and sculpted muscle.

Cara tried to look away.

He gently but firmly pushed her face back toward him. “If you want to stare, stare. Lesson number two: denying harmless impulses makes good chaos turn bad.”

“The trick is figuring out which impulses are harmless.”

His hand was burning her face. She’d have a print of Jack’s hand on her jaw before long, from the heat of his touch.

She moved his hand away with her own, the one where she still wore her engagement ring. She tried to focus on the ring. Phil had been dead less than six months. Her body might be ready to jump into something, but it was too soon. Wasn’t it?

Moisture gushed between her legs. Her nipples perked painfully.

Series blurb: Welcome to an America where the non-human Different and magically gifted humans live among ordinary people. Witches are both feared and honored, but shape-shifting Duals are treated as second-class citizens. The Agency, a government agency that’s supposed to monitor illegal uses of magic and Different abilities, has developed its own dangerous agenda. But when Duals and witches join forces, the Agency and other bad guys aren’t going to know what hit them.

And neither are the witches and Duals. Witch magic grows from the positive energy of love and sex–and the only thing better than one Dual is two of them! And then there are shamans, who work their chaotic magic to comfort the afflicted and shake up the comfortable. Once shamans get involved, everything gets weirder…and sexier.

Blurb: Toronto cop Cara Many-Winters Mackenzie is still reeling from her fiancé’s murder when her orderly life takes a turn toward the weird, complete with voices in her head and phantom bleeding wounds.

Cougar Dual Jack Long-Claw reluctantly agrees to take Cara under his wing, though he’d much rather take the beautiful city girl into his bed. As he guides her through a crash course in shamanic magic, sparks fly—some sexy, some snarky. But when an ancient enemy attacks the village, they must work together to hone a magical weapon against certain destruction.

A Dead Man’s Debt by Grace Elliot → ← New Release: Faustina and the Barbarians by John McKeown

2 Responses to “Teresa Noelle Roberts Talks about Cougar’s Courage, Book 3 of the Duals and Donovans series”