Run for Your Love by Annabeth Leong 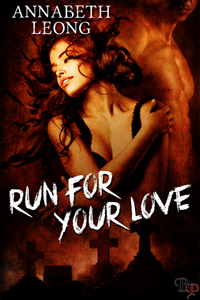 Shotguns seem to be everyone’s favorite accessory for the zombie apocalypse, but Zach Paul believes he can survive without hurting anyone—not even the zombies. An elite-level runner, he plans to speed away from every danger. Then Zach meets a woman he can’t bring himself to leave behind, and staying beside her tests all his principles.

Viola Ortiz fought free of her controlling boyfriend just before the zombies came, but now she believes her macho ex is the only one who can protect her. She sets out to reunite with him, only to encounter Zach instead. The tall, lean runner is everything her ex is not, and Viola is shocked to find he turns her on as no man has before. Viola’s ex, however, isn’t willing to let go of her, and soon it’s clear that other survivors are as dangerous as the zombies.

Zach and Viola can run, but they must find safety before they lose their humanity in the struggle to protect their lives and growing love.

It may not have been too crazy for me to think I could keep clear of the zombies in the Quarantined Area. On the news everyone kept saying these are “slow zombies.” They’re dangerous, diseased, and mostly impervious to pain, but not the sort of terrifyingly speedy hunters that have been popular in movies lately. My plan to run in there was risky, but I like to think not completely doomed. I planned around my talents instead of just deciding I’d somehow figure out how to execute a standing long jump of multiple feet once I found myself staring down at concrete two stories below a rooftop. I trusted the only thing I’ve been able to rely on my whole life—my legs.

What I didn’t take into account were bullets—as in projectiles whizzing past my ears as I booked it down the sidewalk. Why the hell does everyone think the zombie apocalypse gives them a license to act like Rambo? I’m not just talking about what happened once zombies actually appeared in the middle of our city, eating brains, shambling, and whatever else they do. I’m talking about all the years of excitement about zombies—Facebook quizzes predicting whether your relationship would survive an outbreak, the sudden popularity of YouTube videos about parkour, and a pervasive cultural obsession with shotguns. I think people watched zombie movies and decided it would be great for the rule of law to break down to the point that they’d be allowed to solve problems by shooting first and asking questions later.

It’s not the most macho position to take, especially not in the neighborhood where I grew up, but I guess it’s clear by now that I’m a pacifist. Some other guy might respond to the looters by taking cover behind an abandoned building and pulling out his own gun to trade shots. That’s not my style.

Instead, I shouted, “What the hell?” and tried to run faster.

Two days into societal breakdown, street cleanliness had already suffered. Trash bags, newspapers, and other detritus littered the road, and I swear the pavement had more cracks than usual. It took all my concentration not to slip or break my ankle.

I don’t have experience dodging bullets, so I wasn’t sure if I’d be harder to hit if I tried to zig-zag or not. Since I didn’t know, I ducked my head, picked up the pace, and hoped for the best.

The guy with the gun shouted, “Drop the backpack!” Apparently, he thought bullets made good punctuation.

“There’s nothing in it!” I screamed back. Which wasn’t strictly true. I didn’t have any money or valuables, which I assumed was what they were looking for. On the other hand, the backpack had everything I thought I needed to survive in the Quarantined Area, so I didn’t want to give it up.

“Like hell it’s empty!” The guy chasing me squeezed off a few more shots.

The fact that he hadn’t managed to hit me yet confirmed one of the points I’d like to make about guns, which is related to a couple of the things I’ve already ranted about. A lot of people think you can just pick up a gun and go to town. That tells me that most people have never actually held a gun, much less fired one.

I’ve been to the shooting range a number of times with my older brother Dominic, and once, before a birthday party he celebrated one year in Vegas, that included firing machine guns. Before I’m accused of hypocrisy, I’ll add that Dominic spent a long time trying to get into the police academy, and I provided moral support while he studied and trained. Anyway, after several good tries, I learned that if you can hold a gun without your hand trembling uncontrollably, you’re doing well. And it takes training before most people can manage to hit, say, the broad side of a barn.

The looter chasing me might think he was tough, but he’d obviously never gotten the chance to practice with a gun. I promised myself I’d say a prayer of thanks as soon as I got out of range of him and his burly friends. I almost looked forward to the zombies at that point—at least I’d understand their motives.

Someone cried out behind me, and I risked a glance over my shoulder. One guy lay on the pavement clutching his ankle, probably a victim of one of the cracks I’d noticed earlier. Two of the others seized the excuse to quit running, squatting beside him clutching their sides, gasping, panting, and coughing. I allowed myself a satisfied smile. The guy with the gun hadn’t tired yet, but he would, as long as he didn’t manage a lucky shot before I finished putting him through his paces.

I lengthened my strides. It felt good to take my body to its limit, to dig as deeply as I could into the inner reserves I’d built up over the years… Right up until I realized I’d forgotten to keep an eye on the littered road.

My foot tangled in a plastic bag, and I went down hard. It was like something out of kindergarten—bloody knees, bloody palms, and pain that brought stinging tears to my eyes. A bullet hit the asphalt a mere foot away from me.

“Let up, man!” I made my voice as threatening as possible, despite my vulnerable position. “I got nothing!”

“Give me the backpack!”

Adrenaline forced me to my feet. I took a deep breath, preparing to push myself back into a run despite the stiffness already settling into my knees.

That wasn’t to be, because my fall had allowed the big guy catch up with me. He may not have known how to use his gun, but he sure as hell knew how to use his hands. He demonstrated on my trachea as soon as he got hold of me.

I hate to say it, but I froze. I thought about trying to stomp on his foot or something, but I didn’t really expect that to work, and I didn’t want to die a traitor to my own pacifist ideals. I helplessly pondered what to do as he squeezed my neck tighter, and I started to feel chilled and light-headed.

That was the first time I saw her, and considering how little oxygen was reaching my brain at that moment, you can probably understand why I thought she was some sort of apparition. She was beautiful. Sexy? Yes. She had the sort of curves that make a man want to spend long afternoons in bed just tracing the shape of them. Lips to match and ringlets of black hair that I immediately wanted to feel across my bare chest. But she was also beautiful in a holy way—some kind of light in the eyes or glow to the skin that reminded me of pictures of La Virgen. She was dressed all in blue too, which contributed to my impression that she wasn’t entirely of this world—my mother taught me that blue is Mary’s color.

Her small, compact body hurtled into me and my captor with force far beyond what I would have expected from her weight. She screamed that he ought to let me go, and his grip loosened, I think because he was so stunned. Neither of us knew where she had come from or what she had to do with me.

Unfortunately, the deranged looter’s first instinct after letting go of me was to go after her, specifically by hooking a finger through one of the big gold hoop earrings she wore. I stretched my own rules a little and jabbed him in the ribs with my elbow, hoping to distract him enough that my rescuer and I could both escape.

She didn’t have the kind of qualms I did. Out of one pocket, she produced a can of pepper spray and proceeded to administer a healthy dose straight into his eyes. I covered my face in time, but he gave a high-pitched scream and clapped his palms to his cheekbones. The gun hit my foot then the pavement. The woman screamed too, and I wondered if he still had her by the earring.

I dropped to the ground and crawled a few feet away, moving through the pain in my knees and palms. A glance at the woman showed she’d gotten herself free of her opponent’s grip and had grabbed the upper hand by far. She administered a series of precise and painful-looking strikes to his abdomen.

Any second, more of the looters would join this fight. I didn’t feel good about running away when she’d gotten involved in the first place because of me.

Pushing myself to my feet, I went over and grabbed her elbow, wincing when my scrapes contacted her skin. “We have to get out of here,” I told her. “Try to keep up.”

She rolled her eyes but didn’t answer me. I took off running, feeling so much adrenaline by then that the pain in my knees didn’t really bother me.

She wasn’t next to me.

I whirled without stopping, in time to see her scoop the looter’s gun off the sidewalk and toss it into a glittery backpack she carried, slung too low to be entirely practical.

I took my own turn rolling my eyes. Just what I needed. Another Rambo wannabe. “Come on!” I shouted.

I have to admit that despite annoying me by going for the gun, she’d impressed me so far. The next thing she did really caught my attention. She grinned at me, as wicked and gleeful as if we’d gone out racing to settle a bet. Then she covered the distance I’d put between us so fast it took me a moment to realize I was being outpaced.

She shot past me and tossed another smile over her shoulder. “You better hurry,” she said, with a Puerto Rican accent and not a trace of effort. “Ahora, chacho. Those guys look mad.”

Did you miss Annabeth’s previous titles with Breathless Press? Not to worry. E-mail proof of purchase of Run for Your Love, such as an Amazon receipt, to annabeth dot leong at gmail dot com and let her know your e-book format of choice. Annabeth will buy a copy of her werewolf novella, Not His Territory, for anyone who sends this information before November 12, 2013.

2 Responses to “Run for Your Love by Annabeth Leong”