I’m very excited to have fabulous writer, good friend and sister Brit Babe, Lily Harlem, over at mine to talk about Misconduct, the latest instalment of her sizzling Hot Ice Series. Welcome, Lily! Take it away!

Hi Kd, thanks so much for inviting me over to your lovely blog, it is always an absolute treat to be here and brightens up the dullest winters’ day. 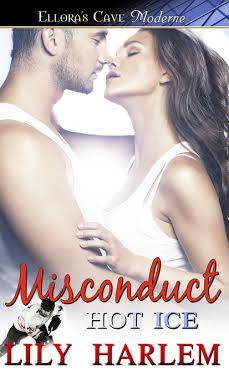 I’ve dropped in to tell you about m new release, Misconduct, the 6th book in my Hot Ice Series. The Hot Ice books are great read in order but it really doesn’t matter as they standalone as individual novels. The team, the Vipers, stays the same but each story follows the love and lust of a new player and a lucky lady (or guy) who captures their interest.

I love writing about these bad boys of the ice, they just keep on demanding to have their stories told and as long as readers keep on enjoying them I’ll keep on writing them.

The first book in the series is Hired which won Best First Chapter and Best Cover – Readers Choice, D Renee Bagby – and recently hit the #1 spot on the Amazon Erotic Romance Charts. The second book Cross-Checked won Best Sports Romance of 2012 at Sizzling Book Reviews, the 3rd novel Slap Shot is my personal favorite (perhaps because it features the kinky captain of the team!), the 4th, Teamwork, is ménage a troi, what’s not to love about TWO hot hockey players giving it their best shot in the bedroom with one very happy girl? The 5th book, High-Sticked also graced the Amazon Chart recently and rode high in the Gay Romance top 10 for several weeks. High-Sticked is the only m/m book in the series, Todd, a super-star player and all round gorgeous guy, just had to have his story told!

Now Misconduct has been released into the world and I’m looking forward to seeing what readers make of the goaltender, Dustin ‘Speed’ Reed. He’s fast and furious, cocky and charming and has a heart of gold. He also has a few dark desires that he just ‘has’ to follow through on. Phew, I lurve him!

When it came to picking a heroine for Misconduct I chose Gina. She’s the daughter of the owner of the Vipers hockey team, Fergal Gunner, and gets well and truly thrown in at the deep end with the players when her father is taken ill and she has to take over. It’s just as well she’s able to handle herself amongst all those testosterone-overdosed guys because before long she’s juggling more than just the team’s books!

Manage the Vipers hockey team! Me? Well, that’s my role now. Shame a gorgeous, cocky-assed goaltender is testing my patience. Sweet cheeks—really, is that any way to refer to the boss? Dustin “Speed” Reed certainly seems to think so.

It’s okay though. I’ll escape to my billionaire father’s paradise retreat. Except Dustin decides to jump on for the ride. Then the tension really heats up, hotter than the scorching midday sun.

I want to slap him and kiss him. Push him away and rip off his clothes. The feeling is mutual—a potent cocktail of anger mixed with lust. I know we shouldn’t. It can’t end well, especially when I’m going give him the sack as soon as I push him out of it.

But what’s the fun in having rules if no one ever breaks them? I’ll take what I can, give him what he wants and worry about balancing the books tomorrow. Surely my heart will be fine.

If you like hot hockey players or just hot athletes in general, then you might want to check out the entire Hot Ice Series . Also, indulge in a few steamy pictures on my  Pinterest page – I have the real thing, hot ice and High-Sticked boards. There’s also a great new one-stop-shop website to cater for all your hockey romance needs – Hockey Romance with it’s own Facebook Page.

Kd, thank you again for having me ‘skate’ on over to your place. Wishing everyone a lovely day full of fictional delights!

He licked his lips, leaving a wet sheen there that captured my attention. “We can. Come on, what do you want?”

I shook my head, licked my own lips. I couldn’t bring myself to say it. But the truth was I didn’t want him at all because the team couldn’t afford him. Not on his current exorbitant salary anyway. God knows what my father had been thinking when he’d agreed to that. He must have been on the whiskey or something.

I looked out to sea, watched a lone gull swoop across the surface of a crashing wave.

“Tell me,” he said again, pulling me closer still.

My breasts came into contact with his chest. A dart of longing went through me like it had in New York when he’d kissed me. How did he do that, when he was so damn furious with me it just made me want to get closer to him, physically that was. Sense told me I should run, get the hell away, but I couldn’t. I didn’t want to.

“Because I…I don’t want you.” I pressed my hands on his dense pectoral muscles, stared up at him. 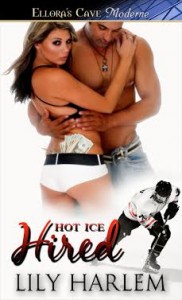 “The state I’ve inherited the team in is…” I stopped myself. I really couldn’t go into all the financial details with a player. That wasn’t fair, nor ethical. Not when I hadn’t had a chance to hash it out with Dad yet.

“The state you’ve inherited the team in?” He spoke with a guttural quality to his voice, as though he’d mixed gravel with the words.

“I can’t discuss it. You’ll just have to accept the decision.”

His nostrils flared and his lips flattened. “You mean that, don’t you? You really don’t have any intention of renewing my contract.” He paused. “Shit.”

God, I hated to see pain in his eyes. He clearly loved playing for the Vipers. And who could blame him? It was every hockey players’ dream come true.

I slipped my hands higher onto the base of his neck and rubbed the taut tendons there with my thumbs. “I wish I did want you,” I whispered.

Oh, what a lie. Because I did, just not for the team. His body, pressing against mine, the smell of his slightly malty breath and the way he was eating me up with his gaze. It all made me want him very much. In my bed.

Suddenly he snapped me tight against him, wrapped his arms around my waist and set me flush against his body.

“And I wish I didn’t fucking want you,” he said, his jaw tightening, the syllables seeming to struggle to get out from between his gritted teeth.

He wished he didn’t want me? Those words ping-ponged around my mind. What did he mean? That he did want me, the way I wanted him, even though it made no sense?

I went up on my toes and cradled the back of his head. I stared into his eyes, looking for answers. His pupils were wide despite the sunshine, and desire flamed within them. Yes, I’d been right, he did want me, exactly the same way I had to have him. Now.

I kissed him. With the same furious passion he’d inflicted on me in the hotel. For a horrendous moment I thought I’d made a God almighty mistake—his lips were still, his tongue flat. But then he melted, opened up and let me in.

He groaned, dipped his tongue into my mouth and slid his hand up my back to my hair, bunching his fingers in my casual updo.

Like before, his kiss transported me to a wild place where anything could happen. I writhed against him and was aware of his cock hardening against my stomach. It thrilled me that he was turned-on by me. Big, tough Dustin was hot for a bit of action with little old me. Bring it on.

“Fuck,” he muttered against my lips. 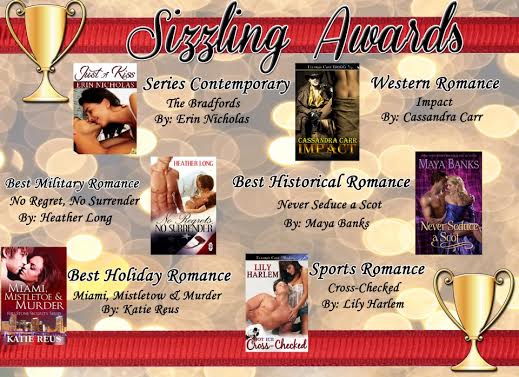 CJ Payne Tells Us How Lynton Gets Stung! → ← The Initiation of Ms Holly on Tour with SourceBooks

One Response to “Misconduct by Lily Harlem”