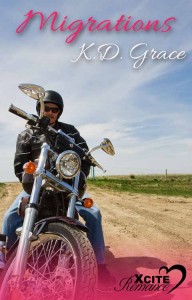 The idea for Migrations came out of an ill-fated cross-country trip I made with family some time ago, and yes, we did drive across the places in Nebraska where the lovely sand hill cranes set down to rest and feed up on their very long migrations, though we weren’t there at the right time to see the cranes. And no, my adventure wasn’t anywhere nearly as fun and sexy as Val Hasting’s adventure turned out to be. But that’s the beauty of fiction. It’s a lovely way to redeem even the worst or our misadventures.

If you’ve read Migrations, I would very much appreciate your vote. It’s easy to do. All you have to do is click on The Romance Review badge in the upper left hand corner of this page,  or click here. The voting is open until 31 March. If you’ve not read Migrations but would like a steamy cross-country romp, just follow the Buy links to get your copy.

In the meantime, here’s just a taste of Val’s adventure:

They sat quietly listening to the approaching night. The high grass in the nearby fields was motionless. The air smelled of moist loam and new growth. Everything seemed to be holding its breath.

He heard it first. She felt him tense. There was a shifting in the air, then the growing sound of distant cries and calls, accented by rattling woody trills. The calls of the sandhill cranes were nothing at all the trumpeting sounds she had heard when she’d studied whooping cranes down in Port Aransas. It was like nothing she’d ever heard before, growing louder and more heavily syncopated, until she could feel it deep between her hip bones, down at the base of her spine. They were engulfed in a rolling sea of percussive trills and calls that sounded like endless, anxious questions waiting to be answered, and the moon disappeared in a sea of fluttering wings. ‘Oh my god!’ She raised to a half-crouch and squinted into the chaos. ‘It’s the cranes. It’s the sandhills! You were right. They’re here!’

‘Looks like they’ve managed to slip in under curfew again.’ He slid an arm around her and settled her back on the ground as the first birds landed and began feeding only yards from where they sat.

‘They’re huge!’ She exclaimed. ‘I mean I knew that, but actually seeing them, being this close to them, well, that’s different, isn’t it?’ Then she added, not taking her eyes off the cranes. ‘Did you know they’re the oldest known bird species still surviving? They found a Miocene crane fossil right here in Nebraska, ten million years old. Can you imagine? And it was structurally identical to modern sandhill cranes. We’re looking at the ancient past, Hawk.’

‘They make me feel a bit like a time traveller,’ he said.

She nodded agreement, as a large male close by raised his red head and rattled his questioning call. ‘I think they could easily devour a greedy businessman – well chopped, of course.’ In spite of her tasteless joke, such an end for Beranger did seem like poetic justice.

‘They are the descendants of dinosaurs, after all, and a ravenous lot.’ Hawk said, looking out over the sea of cranes.

‘As far as some of them fly to reach their breeding grounds, a little extra protein certainly wouldn’t hurt.’ She pulled the jacket tight and let the feral aroma of leather and maleness caress her.

Another wave of cranes landed nearby. The air pulsated with warm bodies, the scent of distance and altitude still on their wings. As darkness settled, the fields around them seethed with need and urgency that brought the birds back to this same place year after year, generation after generation, millennia after millennia.

‘My aunt thinks you killed Beranger.’ Her boldness surprised her.

He laughed, cupping her jaw in a calloused hand and tracing her lower lip with his thumb. ‘I had to. You said it yourself, the birds could use the extra protein.’

She nipped the tip of his thumb playfully and looked around at the feeding cranes. ‘Bon appetit!’ She called, uttering a startled gasp when he pulled her down onto the grass, his mouth covering hers as he engulfed her in his warmth and his scent.

He pulled away enough to shove her tank top up until her belly was bare, then he  kissed her just below the waist band of her bra where her ribs came together, causing her to inhale in tight little gasps. He licked and nuzzled his way down to her navel, while he opened her zipper and slid a hand inside the low waist band of her panties, clearing the way for his hungry mouth. She arched up to meet his kisses, as he slid her clothing down over her hips.

And they were both on their knees fumbling with zippers and snaps, pushing and shoving at denim and cotton, all aflutter like the wings of the cranes around them. The need felt like a fast moving prairie fire, with too much heat to even notice the prickle of the grass and the scratch of last year’s dead vegetation still not quite surrendered to new growth.

She heard the tear of the condom wrapper, and as she kicked free of jeans and panties he was already sheathed and ready for her, settling her bare bottom back onto his open bomber jacket and pushing into her with a grunt, which ended in an inhaled breath sucked between his teeth. ‘Oh god,’ he sighed. ‘Oh god.’

She was slick and pouting, aching and heavy. She had been all day, ever since she first saw him stroking his cock behind the bathrooms at the rest area, and she took him with tight, yielding ease that rubbed and slid and gripped in all the right places.

She lifted her legs around his hips and he groped and kneaded her ass cheeks in an effort to pull her still further onto him. ‘You’re so deep and 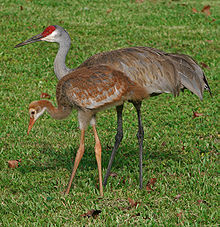 tight, and god, you feel better than anything,’ he breathed.

She grabbed his clenching buttocks, running trembling desperate fingers down the crack between, parting them, fondling them, teasing, making him suck air as her fingers brushed his anus and lingered to explore timidly.

His thrusting had become tight, stiff, manic, and she was practically off the ground, wrapped around him so tightly, digging white knuckled fingers into the tense muscle beneath his shoulder blades. All breath was gone, all thought was gone. All that was left was instinct, hunger, need. It erupted in harsh cries that caused a startled rustling of wings and a few muffled squawks in the sea of feathers and sinew, but little more. It was as though the birds somehow knew they were no threat. They continued to feed and settle in to roost as though the earth hadn’t moved, as though the fireworks of hormonal chemistry between two humans had nothing to do with them.