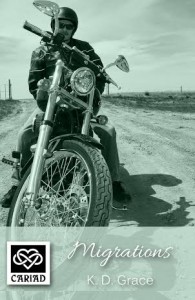 Is HAWK, the biker, a murderer, a free spirit, or something else? Whatever he is, animal attraction wins out over caution, as he joins the ladies for a cross country romp that keeps Sally and Aunt Rose nervous and Val hotter than her overheating engine.

‘It’s the road trip from hell! I knew it would be. I just knew it!’ Val didn’t bother to speak quietly. After what she’d been through, no one could possibly blame her for losing it and talking to herself. And this was just the beginning! How the hell was she going to survive this little misadventure all the way to Oregon? She glanced quickly over her shoulder as she stepped behind the bathrooms at the rest area, trying desperately to block out the memory of Aunt Rose accusing the elderly gentleman at the vending machine of stealing her change.

She needed to vent or she’d explode. Once behind the building she turned her face to the wall and banged her head against it. ‘Why me? I’m not a bad person. I never murdered anyone, I always recycle, I volunteer for the autumn fucking bird count. Why, ‘she banged her head for emphasis.’ the hell’ bang bang bang. ‘Me?’ Bang, bang.

‘Sh!’ A man in a faded blue t-shirt and jeans that were even more faded raised a finger to his lips. It was impossible not to notice that the other hand was occupied, wrapped around the big stiffy that looked as though it had parted his fly like Moses parting the Red Sea, and my, what a staff!

When he was sure he had her full attention, as if there was any doubt of that, he spoke. ‘Quiet.’ He glanced around quickly. ‘If word gets out,’ he nodded to his stretching cock, ‘everyone’ll be back here getting a little relief from the road. Though in your case,’ he leaned closer and she could see startling blue eyes peeking over the mirrored shades that slid down his sun-freckled nose, ‘ I reckon you need it more than most.’

Without missing a beat, he gave her an appreciative nod. ‘There now. That’s better, isn’t it?’

“I very highly recommend this book and give it 5 out of 5 stars! The writing is superb with a story that is wonderfully refreshing. This story has a little bit of everything to make it extremely entertaining. At times it’s laugh-out-loud hilarious; it has family drama, mystery, and romance. While the heat level is high, there is also much more to this fun story that will keep you completely glued to the pages from start to finish. I absolutely loved this book and it’s one that I could read over and over again!” The Romance Reviews

“A fast paced read with lots of super hot passionate “rip off your shirt sex” scattered throughout, which was believably written with intensity and passion and plenty of sexual tension which I love in a book. I loved how they grabbed their sexual exploits throughout the journey and how she was gradually falling for this sexy hunk of a stranger oblivious to the whitterings of her relatives.” Midnight Boudoir

“Migrations is another winner by Ms. Grace. The characters steal the show with their over-the-top personalities that are intermingled with enough intrigue to keep the pages turning. What’s not to love?” BookingIt Grade:  A-