Maxim Jakubowski Shares How NOT to Write a Sex Scene

I have the honour of partying with Maxim this Friday night in London in the big launch extravaganza at Sh! Hoxton. Ekaterina and Pets will be launching together, and there’ll be double the fun! You won’t want to miss it.

Welcome, Maxim! It’s fantastic to have you on A Hopeful Romantic! 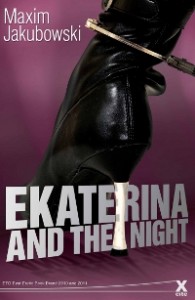 I don’t plan my novels, let alone my short stories. They all begin with the germ of an idea, a title and an opening line, and then it’s in the hands of fate and my imagination as I improvise my way down the sometimes rocky and winding road, serenaded by the flashing cursor on my screen. A bit like a journey into the dark, although I sometimes have a glimpse of the finishing line, a sentence, a feeling, something I’m moving towards.

Sometimes, I take up a challenge when a friendly editor asks me to contribute to a themed anthology: hotel rooms, nudity, particular cities, vampires, voyeurism, a historical setting (the latter almost defeated me and I came up with a tale featuring Scott and Zelda Fitzgerald, unable to go back any further through time…); it gives the writing journey a focus of sorts. But if the theme doesn’t connect with me, I’m unable to conjure anything up: fairy tales, female domination, spanking, bondage are just not ‘me’ somehow and I have regularly drawn blanks when it comes to those themes (and books).

In essence, everything I write is erotic. Even when I used to, so many years ago, write science fiction and fantasy and later crime thrillers, I was often criticised for introducing sexual scenes critics and readers often objected to. I just couldn’t see what the fuss was all about. After all, even in a genre setting, you have to come up with credible characters, men and women made of flesh and words, not just cardboard cut-outs. And what do men and women do in real life, they have relationships, contact, sex. So why should that important component in their lives be automatically excluded from the story, even more so when the sex became not just an act of titillation for the reader but an integral part of the plot insofar as it determined the characters’ psychology and action?

But even today, every morning while I stare at the white screen and see my story progress in leaps and stutters I always feel surprisingly wary when the moment comes for my characters to intersect, for sexuality to rear its head; the dreaded sex scene (although some of my critics would question that, insofar as they see my books and stories as an unending, continuous sex scene…). How am I going to describe the waltz of bodies, shedding clothes, embraces, sounds, colours, feelings yet again and do it well, play the right note. After all, I’ve written and published 11 novels and almost a 100 short stories and here I am having to uncover yet another variation, not repeat myself, another way of ordering the words in the right order to evoke something so wonderful and private and universal without repeating myself? Will I manage it again? My initial instinct is negative, fearful I am that I will this time come up with cliches and, worse, vulgarity. It’s my daily Rubicon.

So, I close my eyes, I evoke personal memories, the way my heart and my genitalia and the pit of my stomach once felt and, like a miracle, the words always come. OK, so some times the same words become over-employed (but that can always be put right in the later editorial revisions/process) but once the feeling overtakes me, the sex scene just flows, I’m floating on air again, sometimes I even shamefully must confess I get hard (an odd form of narcissim, I know). In most cases, I initially feel it’s going to be tough to extend the scene over more than a couple of paragraphs but invariably I end up up with a whole page or more and have to cut things short for fear of the sex scene taking on too much importance in the general balance of the story or the chapter.

In every sex scene I seem to pen, I imagine myself, like a deep sea diver, in the mind and skin of the protagonists. Whether they be male or female. I feel what they feel, I hurt when they hurt, I come when they come (metaphorically-speaking), I sigh when they sigh, my breath accelerates or slows down as theirs does. I am making love with myself (spare me the joke…), I’m fucking and being fucked, I am in love.

It works for me, that’s all I can say.

It feels real, and that is of paramount importance; makes it believable instead of yet another set of hydraulics and cliches, or wishful thinking. And the truth I have tried to inject into the sex scene illuminates the characters and becomes an integral part of the plot.

In my new novel, EKATERINA AND THE NIGHT, I have an ageing English film critic (did I mention I run an annual film festival, in civilian life?), a young Italian trainee journalist, an immortal female killer, the cult, French writer Boris Vian, a black jazz musician high on drugs, and sundry other men and women waltzing through the whirlpools of lust and love. And every time their clothes come off (or even if they don’t, let’s not be so literal…) I was them, fucking and being fucked, touched by the divine presence of sex, but I hope that when you read the book, you will not see me, unshaven and unkempt typing at my keyboard in a room overlooking a large green London garden with squirrels and pigeons on the lawn, but you will see Ekaterina, Emma and Alex Ballard, and they will have real faces and bodies in your mind. If they do, then I will have succeeded in bringing them to life in their sex scenes and between the lines of the novel.

When a mysterious angel of death who calls herself Emma enters their lives, Ekaterina and Alexander know their days together are numbered.

A shocking climax set in Venice in winter brings the three protagonists together.

A tale of sex and tenderness that ranks alongside Jakubowski classic The State of Montana.

MAXIM JAKUBOWSKI worked for many years in book publishing as an editor (including titles by William Golding, Peter Ackroyd, Oliver Stone, Michael Moorcock, Peter Ustinov, Jim Thompson, David Goodis, Paul Ableman, Sophie Grigson, Marc Behm, Cornell Woolrich, etc…) and launched the Murder One Bookshop, which he owned and ran for over 20 years. He now writes, edits and translates full-time in London.
*****
COMMENT TO WIN!
Courtesy of Xcite Books, three lucky winners can get their hands on a copy of Ekaterina and the Night in their choice of paperback or digital format. (International entries welcome)

Simply leave a comment on this post to win. Be sure to check out the rest of the posts in the tour, because the more comments you make, the more chance you have of winning! Go here to see the blog tour schedule.

PLEASE leave your email address in the body of the comment. No email address = no entry. Winners will be drawn and contacted on the week ending 11th November 2011.

Ekaterina and the Night buy links:

Paperback (available in the US slightly later than the UK)

‘Weekend at Wilderhope Manor’ Launches Today → ← In London with Stella