Lisa Beth Darling Shares the Story Behind The Heart of War

I’ve always been a huge fan of mythology, so I’m very excited to welcome Lisa Beth Darling to tell us about her very long and productive relationship with Ares, the God of War.

Ares and I have been together for almost twenty-years. In a lot respects we’re like an old married couple; we needle each other, poke fun at each other, spur each other forward, lean on each other, and generally just share this whole experience we call Life. It’s a very symbiotic relationship and, I think, it works well on all counts.

I say twenty-years because that’s the first time Ares made an appearance in a story I was writing but I was actually introduced to him ten years before that in a high school English class. I thought he was the most interesting God in the Greek Pantheon and I still do. Anyway, back to that story. 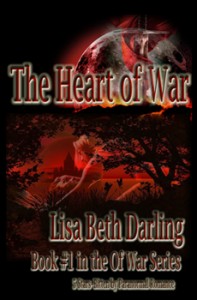 talking about The Information Superhighway, ie, Internet) it was titled “Highlander: Forever”. At the very end of the long, sweeping, romantic tale, Ares came in as the heroine’s Father and surprised the hell out of me. But it was what the story wanted and it was total fiction so, why not? We went with it. He ended up a brief appearance that consisted of, maybe, five lines but they happened to pull the whole story together. When I got on the Internet and re-typed the story because my word processor discs weren’t compatible with the new computer, I put it up on the Internet. People liked it. It was different. Most of my stuff is…’different’. People complimented on Ares and on how much they liked the way I’d written the character.

I didn’t write him. He just sort of wrote himself in.

Time went on, two television shows named “Hercules the Legendary Journeys” and “Xena Warrior” princess took over the TV on the weekends in my house. “Herc” was handsome and all a hero should be but what’s a hero without a villain? “Ares” was handsome to the point of drooling and wicked as the night was long. He made my blood pump. Two years after that another show came on the TV and started taking over my house along with “Herc” and “Xena”, “Stargate SG-1”. I loved “Stargate” the movie. It was great! I still remember going to see it in the movie house with my husband. I fell in love with ‘Daniel Jackson’ before we left the movies that night. I was never even a big fan of James Spader.

These three shows and their storylines merged in my head. I was a stay-at-home mom with two young daughters. I needed a distraction. Something to fill my time…when there was downtime. I began writing a fanfiction series entitled “Daughter of the Gods” based on the “Stargate SG-1” backdrop, using ‘Daniel Jackson’ as the hero and an original female character ‘Calla’ as the heroine. Ares once again came in to play the heroine’s Father. It fit in so naturally that I didn’t fight it but I tried to make it known that the series wasn’t a ‘crossover’ piece. From the start I considered ‘Ares’ MINE, he was MY character and mine alone. As the series progressed into six novels and thirty short stories, ‘Ares’ took over! Readers either outright loathed him or they loved-to-hate him. He did some pretty rotten shit! Oh, yes, yes, he did.

As with most things, that series ended. My children were older by then, I had a part-time job. I decided to go back to writing all-original novels and stories. I started with “Dream Weaver” which is really a thinly disguised autobiographical account of my time in the “Stargate SG-1” fandom. I didn’t know anything about promotion or ebook conversions or…well…anything really. I was a total newbie, a babe lost in the woods with no mentor. “Dream Weaver” sold a few copies but I was never able to do what I should have for it. 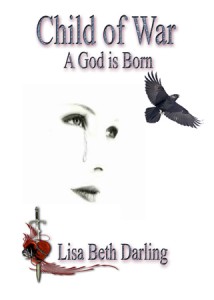 Disheartened, I went back to fanfiction and did two series for “House, MD”. They were quite different from each other. One was a completely erotic adult series and the other was this wonderfully sweet and dramatic story about ‘Greg House’ and his mentally and physically challenged sister ‘Hannah Rice’ an original character of mine. I love that series. To this day I think its some of my best work and I was sad to have it end. Right at the end of the tale, a character from the “Daughter of the Gods” series popped up and became ‘Hannah’s’ love interest. It was wonderful. Not just because ‘Nick Jackson’ fit in so well and so graciously and gently reminded me of a few things I may have forgotten but because he signified ‘Ares’ was just around the corner once more.

The ‘House’ series ended. It was time to write an original novel again. There was ‘Ares’. Through all of the fanfiction stuff, he was the only one still standing tall and strong. He was the only thing about any of that I didn’t just want to hold on to, I needed to hold on to. I needed it because there were so many things left undone with him. Because of the way the previous stories were written, ‘Ares’ could never be the hero. He was always the antagonist if not the outright villain of the stories. 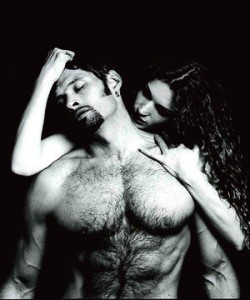 As we (the Muse/Ares/The Big Guy) and I hemmed and hawed over the pros and cons of doing all original material again and trying to get it out there and, OMG! What a tough SELL he was going to be as the hero! A picture came across my eye as I was Googling around.

I KNEW with the right woman, he could be the hero. Five minutes after my eye met that picture “The Heart of War”, a 500 page novel, was rolling around in my head and screaming to get out. We sat down, we wrote without care for publication or audience or word count or specific genre or anything. We just wrote. We wrote and wrote.

When we got to ‘The End’ I knew there were going to be more stories. I knew, just as we finished it, there were four stories to the “OF WAR” series and we were going to be in this for the long haul. We were going to follow Ares and Alena throughout the entire course of their relationship where they would face many dangers and challenges. The biggest of all being whether or not they could stay together and stay in love.

Been fun so far!

Inside the Heart of every Warrior breathes the Soul of a Hero–even within The Heart of War.

Meet Ares God of War, the greatest Warrior the world has ever known. He’s moody, grumpy, dominant, ravenously sexual, and above all, built like a Greek God.

Suspected of killing his Daughter in-Law, Psyche, and long in exile from Olympus, the solitude of Ares’ secluded Greek Isle is interrupted when Magdalena MacLeod a plucky little Fey washes up on his shore after believing she’s been shipwrecked. It’s not mere fate that has brought the unlikely couple together yet it may be what tears them apart.

Branded with a golden chastity belt bearing the mark of Cernunnos, Celtic God of the Forest and Death, Alena has been on the run from her husband the Great Horned God for 200 years.

When the Olympians discover her presence on Ares’ island, they send Apollo to the island while Ares is away with orders to bring her to Olympus. With nowhere to run and strikes a bargain with the God of War–her virginity for his protection.

Ares sees a sweeter deal; her in his bed and himself back in his rightful place on Olympus among the Gods. If it means turning Alena over to Zeus afterward, well that’s of no consequence to him…is it?

After Alena proves herself to the God of War in battle and in his bed, Ares must choose between his Divinely Dysfunctional Family, his pride, and Alena.

Get lost in this sweeping dark saga of lust, rage, revenge, and redemption. Battle Ancient Gods while falling in love with Ares God of War and Alena MacLeod. They share a love that will rock the world from the heights of Olympus to the Celtic moors.

The Heart of War contains scenes of graphic sex and violence. As such, this novel is intended for ADULTS ONLY it is NOT recommended for the Faint of Heart.

“There must be some way to get this thing off of you.”  He huffed as he reached out to touch and examine it.

“Only Cernunnos, only a Go—“

Ares’ hand landed on the gold at her waist, it covered the entire space between her legs, the willow tree, the love knot, and the words I Await Thee.

Both of them looked down to see the band had opened at his touch.

Staring at each other with their mouths hanging open for a moment, each of them not sure what had happened had truly happened, Maggie began to tremble and then to shake.

It opened!  It was OPEN!

“I didn’t mean to do that,” Ares stuttered almost apologetically.

“Get it off me!”  Maggie yelled and began to try to push her fingers through the space between her waist and the band.  “Get it off!”  She cried again and began jumping up and down where she stood as she wriggled and struggled with the belt.

“What are you?  Stupid?”  With her modesty having flown straight out the window, Maggie railed at him, “GET IT OFF!”  It would not budge, her skin seemed to have grown around the edges of the belt, and it would not give no matter how hard she struggled to push it down.

“Stop it!”  Ares demanded.  “You’re going to rip the flesh from your bones!”  She did not heed his words, she just kept trying to pull it off and he could understand her haste but, “You’re not helping!”  He grabbed both of her wrists between the thumb and forefinger of his right hand and held them up over her head.  The woman struggled in his grasp, her brow furrowed and her upper lip curled as she pulled and pulled trying to escape.  “Do you want me to break your arms?  Will that settle you?”  Still she struggled and yanked until Ares had to add a second finger around her wrist to keep her from slipping out of his grasp.  “You can’t get free of me; I am much stronger than you.”  In his free hand a small vessel appeared, her eyes grew wide when she took it in. “It’s olive oil, that’s all.  Just stand still.”  He let go of her hands and when she stood still, he drizzled the oil over and around the band at her waist using one finger to push away her skin allowing the oil to drip past the gold.  The top rim soaked, Ares poured a handful of the oil into his palm.  “Open your legs.”

Maggie hesitated, she wanted the belt off more than anything but feared what would happen the second it hit the floor.

BUY LINKS for THE HEART OF WAR:

Other Books in this series