What Happens in Vegas Part 1 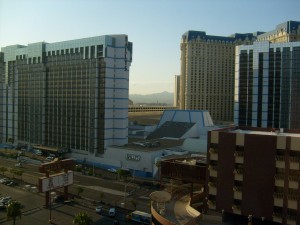 We flew over the Sierra Nevada Mountains just before we landed in Las Vegas.  We all crane our necks for a look at impossibly jagged peaks already covered with snow, even as we were about to land in 97 degree temperatures. But on the ground, it was desert heat and more shades of brown and tan and olive than I would have thought possible, all set off in stunning relief against a baby blue sky puffed with clouds that were clearly only there for looks rather than business. Very appropriate for Vegas.

The woman behind me on the shuttle talked loudly on her cell phone in a Midwestern accent to whoever was taking care of her geriatric dog back home. When the conversation finally ended with her satisfied that the pooch was in good hands, we all turned our attention to the shuttle driver, a man who was a driving history book of Las Vegas. While he delivered us to our respective hotels, he regaled us with stories of Bugsy Segal and the mob history of Las Vegas. The Flamingo is the original resort hotel that Bugsy Segal built in the middle of the desert.

My room was on the 14th floor, with views of the mountains in between the towers of Bally’s and Paris Las Vegas. Once I got settled, I 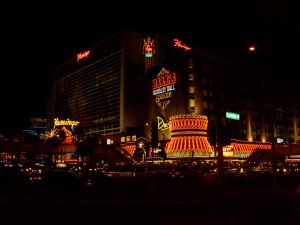 explored the hotel grounds, lingering in the gardens to see the habitat for flamingos, sacred ibis, and black swans. I was planning to meet Sharazade for dinner, but I’d gotten a message from her saying she’s coming in on a later flight, so I decided to check out The Strip on my own.

Las Vegas is in your face, like an arid version of New Orleans on steroids and all tarted up with neon and fountains. It’s like Disneyland for adults, Sharazade observed, when we finally connect the next day. Just as it was getting dark I wandered about with my mouth open and my eyes bugging because there was so much to see. I’ve been to Paris, so Paris Las Vegas shouldn’t impress me, but when it rises up all truncated and neon in the middle of the desert it does. I realized as I walked amid the tourists who are as bug-eyed as I am that though I’m hearing lots of different languages, a lot of the people who are here will never get any closer to Paris or Venice or the Forum in Rome than Las Vegas, and the tarted-up versions can’t fail to impress. 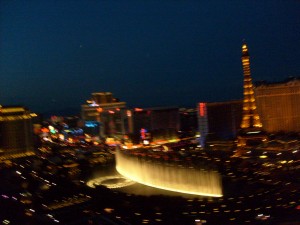 As I stopped to watch the volcano erupt in front of Treasure Island, along with the rest of the enthralled crowd, I realize that as much as I’d like to stick my nose in the air and be unimpressed, the spirit of the place is contagious, and it would be really hard to walk among the holiday makers and the lovers there to elope and the neon and the noise and the resorts that are several city blocks in size and not get caught up in the atmosphere.

I ended up shivering in an overly air conditioned food court having Mexican food, my first since arriving in the US. I ate and people-watched. The city was awash in spandex and suicide stilettos, and I find that, in spite of myself, I was loving every minute of it.

Outside again, I was happy to leave the air conditioning and get warm. It was a dry 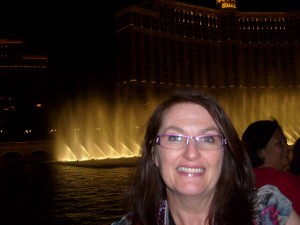 delicious 87 degrees, and that alone, after leaving the rainy damp of south England, was enough to make me feel festive. I walked along stopping here and there to watch people and take in the giddy gaudiness of it all. In some places Hispanic men and women lined the streets handing out cards for peep shows and escort services, and I squirmed at the contrast of people working a hard, uncomfortable job in order to put food on the table while they watch a party going on all around them in which they never get to participate.

I watched the incredible dancing fountains in front of the Bologgio amid the crowd and press of others doing the same, and I wandered along the street where tourists were having their pictures taken with Elvis impersonators and show girls decked out in brightly coloured feathers. A man who had too much to drink was propositioning every woman who walked by. I found myself lost and turned around in the maze of stylized bridges that crisscross the heavily trafficked street that runs through the strip. The bridges cross into resorts and come down alongside towers of glass and flashing lights opening onto the streets like gaping mouths exhaling the overly air conditioned breath of the casinos into the warm the night. 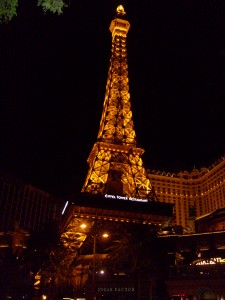 I was caught up and carried along on a wave of sensory overload that smelled of restaurants and cigarette smoke and perfume and sweaty bodies and excitement; and looked like a city all dressed up for a costume ball. I let it all settle around me and flow through me until the heat and the noise and the jet lag of too many time zones passed through too quickly began to take a toll. Sharazade still hadn’t arrived, and I was fading fast. I made my way back to the Flamingo through the sparkle and the kaching of the slots to the elevator banks. I managed to make it back to the room and whip of an email to Sharazade that I’d see her in the morning. Then I slept.

I woke in the night and looked out at the dazzle of the lights from the 14th floor and I drift back to sleep with after images of the rich blue lights of the towers of the Cosmopolitan fading behind my eyelids. The next time I woke up, the mountains between the towers of the casinos were just blushing pink, and I was struck by the contrast of the rugged wilderness, jagged and overwhelming held at bay by towers of glass and steel and lights. Even Las Vegas seems small and demure next to such vastness. 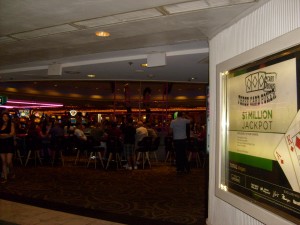 Stay tuned for the next installment of What Happens in Vegas.

12 Responses to “What Happens in Vegas Part 1”