It’s my pleasure to welcome the deliciously naughty Kyoko Church back to my blog with a little sneak peek at part 2 of The Draper Estates Trilogy, Sapphic Secrets! If you’ve not read part 1, do so without further delay. If you have, then you’ll be as anxious to read what Ms Church has to say as I am! Welcome, Kyoko!

Thank you so much for having me back to your awesome blog! It’s such a pleasure and you are always so sweet and welcoming.

Today I’m talking about Book Two in my Draper Estates Trilogy, Sapphic Secrets. Last time I was here I told you about what inspired the trilogy here: https://kdgrace.co.uk/guest-bloggers/the-story-behind-the-story-of-kyoko-churchs-novella-nymphomania/ So you know about that. This time I’m going to let you in on the dark secret about this second book. Are you ready? Here it is: I didn’t really want to write it.

What I’m saying is that short stories come fairly easily to me. Writing a book is something different. It requires more discipline, something I can be a bit short of, to be frank. And this is a trilogy! For me, that is a long time to live with the same characters. They were starting to bug me. I wanted to toss them away and start something new.

I’m shocked that I’m telling you this. Because as a reader, if an author said she had a hard time writing something I would be leery of reading it 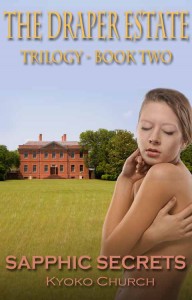 Lillianne awoke with the now familiar aching throb between her legs.

Oh! It seemed now there was never a moment’s respite.

The air of the master bedroom was cool, almost cold and she hunkered down under the bedclothes and savoured the warmth they held. She was alone. Blessedly alone.

In the soft, warm confines of her bed her hand sought the ache at her centre and cupped it, pressed down on it, tried to assuage it. It felt like that, like a comfort, at first.

Of course, the more she kneaded and pressed it, the more the ache grew, like a fire being slowly stoked. She pressed the covers to her mouth to stifle a groan and rocked herself back and forth in anguish. She shouldn’t. She knew she shouldn’t. Because of Dr Samms she was constantly monitored. Who knew when someone could come in? James. Celeste. Her darling Ewan who’d arisen from their marital bed but ten minutes earlier. But the ache persisted and once she’d started touching she felt powerless to stop.

It felt so good. Ah, god, so good to have pressure there. Her body needed it. Craved it. And it wasn’t really so bad, was it, to just hold herself there? That’s really all it was. But after a few moments more her mind flitted back. To thoughts. Oh, nasty thoughts. She shouldn’t be thinking them! Especially not in this way! But they were insidious little things, those perverted thoughts about what her housemaid Celeste had done to her.

Celeste! Not only her housemaid but her confidante. Her best friend. What had the shy little blonde creature been thinking? What could have possessed her? But as the pressure and the pleasure mounted where Lilly held herself between her legs she couldn’t help but remember again how it felt to have Celeste do what she did.

It’s the affliction, Lilly thought. My affliction makes me think these things! It will drive me mad! But once the memories took hold they cemented themselves there. Celeste, shaving Lilly bare between her legs per the doctor’s orders while Lilly’s arms and legs were pinned and powerless, leaving her skin exposed and oh so sensitive. And then. Oh god.

Her housemaid put her mouth there.

Her tongue! Right on the burning centre of her need, the pounding pulse of what drove her madness. And the worst part, the absolute worst part was what Lilly scarcely allowed herself to acknowledge. That to have Celeste’s slick tongue licking and licking that tortured bud of flesh was the most exquisite bliss.

Out of her mind with lustful thoughts Lilly parted her legs wantonly, all thoughts of propriety and repercussions gone. In her mind her finger was Celeste’s tongue on her again but this time, oh this time it would finish what it started.

The first touch of her finger on the sensitive tip of her clitoris was like heaven. Lilly gasped out, her starved body grateful, hungry and eager at the sensation of wonderful firm pressure directly on there again, just like Celeste had done with her talented tongue. Giddy now, she slicked her finger up and down fast and hard, feeling the paroxysm build, not slowly like the evil doctor forced her to endure, but quickly like her body wanted. ‘Oh god!’ she cried, as her body bucked beneath her hand. Her eyes squeezed shut, she couldn’t help but imagine her sweet friend’s blonde head between her legs, moving and working, that tongue laving. ‘Yes! Yes! Please! I need it. Please, Celeste. Please!’ Lilly whispered her tortured pleadings into her bedclothes as she frigged herself hard.

Just as her body began to thrash over the edge of the most powerful paroxysm she’d ever endured, the bedroom door opened and then … Celeste was standing there.

In case you’re wondering, I have none of those same qualms about Book Three. For whatever reason, maybe exactly because I’ve lived with these characters for this long, I am now excited to get to the third installment. Oh, just wait until you find out what’s in store for Lillianne! I am simply bursting to get to it. And … there just may be somebody new who’ll be added to the mix. 😉

I really hope you enjoy it! And I always welcome your feedback. Come by my blog and say hi!

Labelled a nymphomaniac because of her passion, Lillianne Draper is forced to spend her days restrained. She has managed to banish the nefarious Dr Samms only to begin to question the motives of her scullery maid, Celeste. Charged with the task of monitoring her mistress’s illness, Celeste seems to enjoy her new responsibility a little too much.  Lillianne must try and control her body’s responses or her husband will order the return of the doctor who tormented her. But being left every day at the mercy of Celeste is arousing desires in Lilly she didn’t know she had. 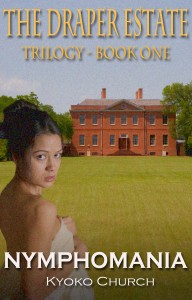 For the next 18 years she hid her naughty thoughts in shame. Until she found a community where they were once again appreciated for the well-imagined smut they are. Her short stories have been published in anthologies by Black Lace, Rubicund Publishing and Xcite Books. Book One, Nymphomania, and Book Two, Sapphic Secrets, in her Draper Estate Trilogy were published by Xcite in 2012. For Her Pleasure will be published by HarperCollins Mischief in March 2013.