It’s totally my pleasure to welcome back one of my very favourite naughty writers and all around fab Chick , Justine Elyot. And wow, has she got a scorching excerpt for us from her new novel, Game! Enjoy!

I’ve had this book planned for a long time. It’s a sequel, you see, to a story I started writing in 2008. That book was published in 2009 by Black Lace and On Demand has maintained a rather startling level of popularity ever since, even though Black Lace disappeared from the market immediately afterwards.

I thought I might pitch it to the original commissioning editor when he moved to Xcite Books a few months later, but in the event, I decided to go with The Business of Pleasure instead. By the time that came out, he was gone (again) and the idea was sidelined in favour of other projects.

Another year went by and, hey presto! He popped up again, inviting me to submit something to HarperCollins brand new Mischief line. This time, Lloyd and Sophie were going to get their encore, and here they are, starring in their own story.

I have a soft spot for Sophie and Lloyd because they happened by accident. I love it when events overtake me during the writing of a story and something very much better than what I originally planned comes out them. I was going to end On Demand with Sophie getting together with her much-crushed-on Chase, who had been keeping her at arm’s length for various reasons relating to past disappointments.

I say ‘ended up’, but their story had only begun. I knew that Sophie had a lot of emotional baggage to unpack before she could really settle, and Game is all about that unpacking process. Which makes it sound deadly dull. I must reassure you at this point that there is a lot of hot sex in this book, and some pretty wild surprises. 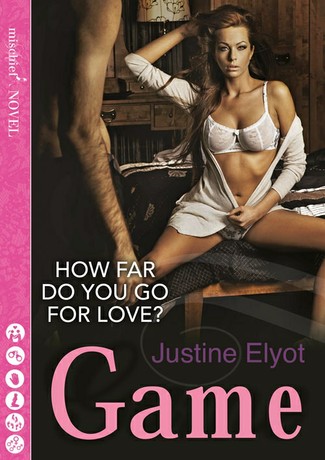 Lloyd rears up and pulls out of me, running a hand through his hair and shutting his eyes for a moment, re-orientating.

‘Shower, then.’ He picks up his clothes, frowns at the terrible state of his jacket and gives me an encouraging nod. ‘Oh dear,’ he says, clicking his tongue. ‘Can’t you stand? Poor afflicted thing.’

‘Shut up, of course I can stand.’ I swing my legs over the side and give a fair impression of Bambi’s first few upright seconds. Lloyd swoops forward and helps me. ‘So gallant, proper Sir Walter Raleigh, aren’t you?’

From the kitchen corner, Sasha snorts.

‘Are you two always like this?’ she asks, without turning around.

I pick up my neatly-folded clothes and hug them to my chest.

In the shower, Lloyd directs the water over my breasts and my sticky thighs.

‘You didn’t fail then,’ he says, sounding disappointed.

‘Did you think I would?’

The jets spray on to my breasts, tingling my nipples. Lloyd cups the underside of my breasts, holding them in place while he keeps the shower head no more than an inch above them.

‘What’s next?’ I ask, flexing my toes, splashing them in the lovely warm water. ‘Sex while parachuting from a plane? In a canoe going over a waterfall? In space?’

He puts the shower head back in its cradle, takes the bottle of gel cleanser, squirts it into his hand, lathers it up around my breasts and stomach and shoulders.

‘Yeah,’ he says, with an enigmatic look. ‘You keep thinking along those lines, Soph.’

He smothers me with bubbling foam and pulls me against him so our chests slip and slide together. Water rains into our mouths while we kiss, leaking into the cracks of lips, dripping off our noses, clogging up our eyelashes.

He turns me around and washes my back and bottom, very thoroughly, far more thoroughly than is quite necessary.

‘I mean what I mean,’ he says, letting the suds slip down the crack of my arse, parting the cheeks, massaging the slightly stinging soap inside.

‘As Confucius would say. What’s that supposed to mean?’

I try to slap him, but it isn’t easy when you’re facing the wrong way and he has his hands on your bum. I manage an awkward collision of elbow (mine) and hip (his) and reap my inevitable reward.

‘Ouch!’ I always forget that a smack on a wet bottom is worth about three on a dry one.

‘Impatient,’ he reproves, keeping me close and tight with an arm around my ribs. Something semi-hard pushes into my right buttock, distracting me from the newly-laid sting. ‘All will be revealed in time.’

I lean my head back on his shoulder, looking up while he looks down.

‘You know, I really hate you, Lloyd.’

He nuzzles his nose against my cheek, kissing the space beneath my ear.

‘That’s because I’m in the shower.’

‘That’s because I’m trying to kill you with sex. I’ll do it one day.’

His hands are low now, fingers moving down with the trickles of water, flowing and meeting at the delta of my sex. He holds me by my cunt and bites down into the softness of my neck.

I give in to it. My body knows no other way. I spread my feet further apart, granting him full access to my lips and clit and vagina, all so recently used by him.

The water provides an extra element of friction when he starts the slow up-down rubbing of my clit with the side of his hand. It almost feels rough, refractory, needing extra force, which he gives.

Because I am facing away from him, I can see the way his arm crosses my body, watch the sinews move beneath the skin, slide my gaze down to his wrist, see the point where the fingers bend and disappear beneath me. Watching the intricate interplay of those muscles, knowing but not seeing what they are working on, is powerfully aphrodisiac. I can see what he is doing, and I can feel what he is doing at the same time.

But then he changes tack, puts his hands on my thighs and slides down behind me until he is on his knees. A tongue joins the lapping water at my pussy, a strong push brings it between my lips. I pivot at the hips and press my palms flat against the wall, holding myself up, keeping myself in position for more of this oral delight.

It’s as if he drinks the warm water away, lapping it up, replacing it with his own luscious licking, cleaning me to make me dirty.

I drip into his mouth, rotating my hips, beginning to moan. He holds me fast, flicks that tongue faster, flicking the engorged bead of my clit over and over. My palms begin to slide. I fear I might fall, but he claps his hands on my hips, keeping me upright.

In the cage frame of his arms, my body slumps. My core burns and blooms, ribbons of sensation unfurling inside me, gushing out to join the combined waters of his tongue and the hot water pipes. I become a fountain.

My splashing self slips down to the tiled shower basin. I want to lie there while the droplets cover and bathe me. But Lloyd has other ideas.

Still on his knees, he clears his throat and looks forlornly down at his erection.

His hair plastered to his scalp, his eyelashes brimming with water-sparkles, his face clean and shining, he looks too completely fucking adorable. I can’t resist him. I haul myself to my knees facing him and take his testicles in my hands, testing them for firmness and fullness. Lloyd has seemingly endless supplies of testosterone, as his cock testifies.

I suck him gently at first, then with increasing urgency, pinching the base of his shaft, squeezing his balls, getting my lips down lower and lower until he is deep in my throat. My cheeks are wet when his thick load of cream shoots into my mouth, but the shower isn’t the only reason for that. There’s a saline element to the damp patches, a stickiness.

When I lie back in his arms, letting the water engulf us both, I hope he hasn’t noticed, but the way he traces a finger beneath the lower lid of both my eyes suggests he has.

And if that’s made you want to read on, you can!

And right now, it’s only 99p for a full-length novel! Grab a bargain.

Many thanks to my wonderful friend and colleague, K D. It’s always a pleasure to visit her – and thank you for reading.

One Response to “Justine Elyot Shares the Story Behind Game”