I’d like to welcome Zara Stoneley to A Hopeful Romantic. Zara is stopping by on her blog tour to tell us about her new novel, Forfeit.

Wow, it’s so exciting to be here talking about my book. I’ve only been writing erotica for a short time and I’m a bit overwhelmed that I’m now published, and talking about it with such an amazing, established author!

I thought today I’d try and give you a bit of insight into the characters in Forfeit and where they came from.

Forfeit is very much about control, and relinquishing it, and I knew from the start that the story would only work if I had a heroine who knew her mind and was normally ultra controlled. This meant I needed a hero who could be dominant, knew what he wanted, and was determined but also very understanding. And so along came Cat and Brent.

Cat has done what a lot of people do when they’ve had bad experiences in the past – they lock them away, bottle them up, build barriers so that no-one can uncover them and they can’t happen again. She’s not a loser though, her experiences have coloured her view on life but she’s realistic, she’s an independent career girl who has dealt with the past, locked it up and thrown away the key. But by throwing away the key she’s thrown away a part of herself.

So why is Brent the man for her? Because he’s not the kind of guy who will ever settle for second best, he wants all of Cat – mind, body and soul, but he recognises that until she accepts herself she’s not going to relinquish control and let him explore those deep dark corners.

I loved writing about Cat, loved the way Brent stuck with her even though it scared him a bit too and the only reason I hated saying good bye at the end of the story was that I felt I hadn’t really told much of Brent’s story. He’s got a bad boy reputation, but once he meets Cat he can’t help caring, which proves that who you really are wins out in the end… but maybe that’s a story for another day.

He raised her hand to his mouth, sucked long and hard on each finger in turn. ‘But then you turned all ice maiden on me and I never could resist a challenge.’ His voice had dropped to a husky drawl, and then he smiled, a lazy smile that turned up the heat from simmer to boil.

She swallowed, trying not to react to the sensations he was driving through her body. ‘So this is just about a challenge?’

‘Oh, I think it’s gone far beyond that, don’t you, darling?’

His hand was firm under her chin, tilting her face up so she met his gaze. ‘Do you trust me?’

She nodded wordlessly, already feeling that familiar tingle running through her body at his touch. He’d left her feeling awkward at the pub, making her raise questions that shouldn’t be raised. Now the softness of his gaze, the almost tender way he touched her, sent a shiver of unease mingled with a desperate need right through her body. She’d given her body permission to enjoy the pure, unbridled lust he inspired in her, but her emotions were different, and the want that tugged at her was more than just primal right now.

‘I don’t want anything you don’t want to give, Cat.’ His voice was soft as though he knew. He leant forward, his lips skating over hers, and then he was slowly unbuttoning her top. He eased back as he let the fabric slip from her shoulders, his eyes drawing her nipples to hard peaks that scraped against the lace of her bra. Two warm hands settled on her shoulders, then ran slowly down over her breasts, splaying out to her waist as though he was sculpting the body that stood before him. She felt the sigh that eased out of her taking with it any lingering unease. She loved the touch of his hands, the dark look that clouded his eyes; wanted just to be here. Whatever the cost.

There was the softest hint of a smile on his generous mouth, a slight parting of lips that drew her finger to them. His mouth closed instantly at her touch, his teeth holding her still, his tongue caressing the fingertip for a moment, and a thrill ran through her, sending her stomach muscles into delicious spasms. 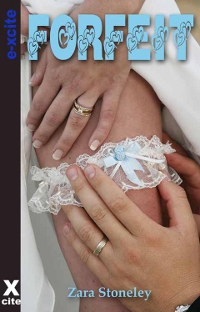 Cat’s life is falling apart – her boyfriend’s dumped her, she’s lost her home and she’s about to quit her job. Her boss, Brent, has a solution: become his wife for a year, to help him land a big promotion. But Cat’s had a taste of Brent before, and she knows he’s a bad boy who loves women and leaves them. So she agrees to marry him, but tells him there’s to be no sex. He adds his own condition: if she as much as talks to another man in that time, she must pay, by acting out 12 of Brent’s kinkiest sex fantasies. When she breaks the rule, the forfeit is on: but opening up and letting Brent into her heart, as well as her bed, could be the most dangerous game of all …

Available from – Xcite Books, Amazon (UK), Amazon (US), Barnes & Noble, All Romance eBooks and all other good e-book sellers.

Zara is a writer and lover of all things romantic, from the sensual to the sexual, who knows that naughty can be nice. She lives in the UK, but whenever she can she heads off in search of some sunshine and inspiration for her stories.

She love sexy high heels…good food….good wine….music…coffee (lots and lots of coffee)… and Italy. All things Italian from the countryside to the culture, the wine to the food…and of course the sexy men.

She’s been a consultant, a teacher, a mother, a wife, a lover… and has always been a writer and she’d love to hear from you.

Where you can find her-

2 Responses to “Guest Blogger Zara Stoneley Tells Us About Her New Novel, Forfeit”