It’s a pleasure to be here on your blog, K D!

I thought I’d talk a bit about Tansy, the heroine of my filthy fairytale novel Named and Shamed.

Once upon a time, a naughty girl called Tansy stole a very precious manuscript from a kindly antiquarian. But all of the world’s ancient and powerful magic, lost for centuries, has returned…and now there is much more at stake than a few sheets of parchment!

Thus begins a rude and rugged fairytale the likes of which you NEVER read when you were little! Poor Tansy is led though the most pleasurable trials and the most shameful tribulations as her quest unfolds before her. Orgasmic joy and abject humiliation are laid upon Tansy in equal measure as she straddles the two worlds of magic and man.

And this is how she describes herself:

“Most men get no further than some reference to Amazons as they paw at me, because at six feet tall and with a rack like this I can’t help but invite the comparison. I’ll never be skinny but I keep active, which means I end up with a taut waist, but I’m still plenty curvy in other places. Add to that my red hair — not an insipid ginger but ferociously bright metallic waves — and pale skin that explodes into freckles all over my shoulders and arms at the first touch of summer, and I get a lot of attention from a certain type of guy. Not necessarily the sort of guy I want, to be honest. Pretty much every man who goes for me has this submission fantasy and they want me to wrestle them to the floor or crack a whip over their ass. Goddamn. That’s not my preference. I want someone who can look me in the eye and not be intimidated. I want a guy who can make me feel overwhelmed.” 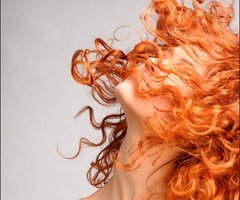 But that wouldn’t work for my fairytale plot. Tansy is not at all passive. She’s a woman on quest. She’s out to save herself, and her friend and lovers. She has to be intelligent and decisive and incredibly courageous, or else she’s going to get nowhere. She can’t be a cipher. And yet she has to enjoy the most extreme and challenging submission: whippings, bondage, public humiliation, and rough sex with two, three, or more (including some monstrously non-human). Stuff that, let’s face it, most normal people couldn’t cope with.

So I’m not saying Tansy is a realistic female character. Far from it: she’s my porn ideal of what a woman should be like. She loves sex, of course. But more than that, she’s got no emotional baggage. Despite a kink for public degradation, she’s not messed up, or insecure, or needy. If she makes a mistake and screws things up – which she certainly does – she always takes responsibility for fixing things afterwards. Kindly, and intensely protective of her cousin Gail, she is quite capable of love, but she has no emotional dependence on anyone else for her own validation. She’s completely self-actualized. She can do almost anything – and have almost anything done to her – and it doesn’t cause any damage to her ego, any loss of self-worth.

“A pleasure to meet you, Tansy.” The Gaffer lifted his gaze from an unabashed consideration of my boobs and looked me in the eye. Without blinking, he added. “You’ve done well for yourself there boy. She’s pretty. Magnificent knockers.”

It was a test, of sorts. A calculated slap in the face, to see how I would react. I flushed and giggled, dropping my gaze coyly. I could feel my pussy swelling at the compliment. Because it was a compliment — degrading and crude and offensive, it was still an acknowledgement of my desirability by the most important man in the room. I got it. In times of trouble, scared people look for leaders. It just so happens that the sort of guy who wants to be a leader is usually a tool of the first order, but that doesn’t matter to them. Even if he chooses to impose some sort of weird elder-tree cult it doesn’t matter, as long as he leads. I knew that with a single word from this man I could be on my knees in this back bar, tugging open his flies and sucking his cock while he sipped his pint with a complacent smirk and everyone looked  on.

I wet my lips.

Her resilience, both physical and mental, is off the scale. She regrets nothing, and she can’t be broken – at least, not for more than a night.

It’s not a bad ideal. I admire her, actually.

Though I’ve got to admit I never met a woman like her.

These e-versions include 19 illustrations by John LaChatte, as does the paperback:

Named and Shamed is also available on Kindle, but without interior illustrations.