Just Who is Behind the Smut and Magic ? 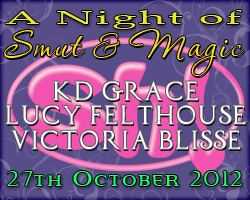 The time is fast approaching! The event I’ve been waiting for since February! Smut and Magic is a launch party times three! I’m honoured to be partying with Lucy Felthouse and Victoria Bliss on Saturday October 27th at Sh! Women’s Store. Lucy and Victoria will be launching Smut in the City, the fabulous new anthology they schemed, dreamed and co-edited. I’ve seen the list of writers included, and all I can say is WOW! A must read!

Smut In The City will be accompanied by Sex Magic in the Lake District, as I launch book two of my Lakeland Heatwave Trilogy, Riding the Ether. I know from experienc Lucy and Victoria know how to party, and the Ladiez at Sh! — well that goes without saying. There’ll be fun, fizz, filth and magic.

As time grows closer and the three of us plan and scheme naughty reads, yummy giveaways and lots of party fun in general, I thought it would be a great opportunity to intruduce you to my two lovely Partners in Smut and let them give you just a tiny taste of their magic. So please welcome Victoria Blisse and Lucy Felthouse to A Hopeful Romantic!

I never really contemplated becoming an author as an actual proper career plan but I always had it at the top of my list of ‘favourite fantasy jobs I’d love’ just above Physio for Manchester United and paid chocolate taster. How did I get into erotica? I tend to blame my husband.

So it’s all his fault.

I have a lot of short stories and novellas to my name now. I write for Total-E-Bound, Xcite, HarperCollins Mischief and House of Erotica who are all British based as well as a few American publishers and I will be published with both Sweetmeats and Cleis press in the near future! I also apparently edit anthologies now. I’ve edited several Bigger Briefs Anthologies and Smut by the Sea and Smut in the City with Lucy Felthouse, fellow Northern Bird and partner in crime. I have an average of one book a month released and spend a lot of time on facebook http://facebook.com/victoriablisse , twitter http://twitter.com/victoriablisse and the like promoting my work. As well as keeping my blog updated http://victoriablisse.co.uk  I’ve also had the pleasure of reading live to audiences and meeting up with other erotica writers in the flesh as it were. I count many of them as good friends, there’s a real sense of community in the erotica and erotic romance (what I write more often 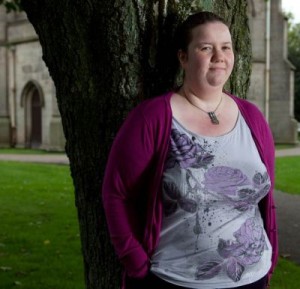 than not) worlds. I am always amazed by how supportive my fellow authors can be and I can’t wait to meet up with my pals at Sh! Again for Smut and Magic!

Excerpt from Mad Fer it in Manchester featured in Smut in the City.

We munch on in silence and watch the kids hurtling through the water.

“I don’t know how they do it,” I laugh, “that water must be freezing.”

“Yes you are,” I reply without thinking and his smile expands to cover his whole face. I try to find some way of covering up my little slip. “So go on then, I dare you to stand on there with the kiddies.”

“Winner gets a kiss.”

Now that sounds like a win-win situation to me.

“You’re on!” I settle back in the grass. He jumps up, pulls off his jacket and drops it to the floor beside me. It smells of him, spicy and fresh. I resist the urge to run the heavy material against my cheek. I carry on watching him and yes, he’s doing it. He’s standing in the middle of the fountain. It’s completely dry now but it’s obviously going to spurt soon. The little kids are laughing nervously, anticipating the cooling jets that will explode beneath them at any minute. I hold my breath. Will he get wet? 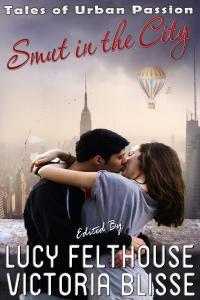 “Ha, see!” He taunts as the water shoots up a metre or so away from him, “told you.”

I’m just about to respond when a spout of water comes to my rescue and squirts up directly beside him, showering him in ice cold water.

“You were saying?” I clap my hands in delight.

He just laughs and wipes his wet hair from his eyes. His white shirt is clinging to his chest now and I can see the outline of his nipples and the dip of his bellybutton.

“Come on in, Lauren, the water is fine.”

“Okay, bring me my jacket.”

I stand and walk towards the fountain. He’s perched on the edge and holds out his hand. I pass him the jacket but he grabs hold of me and pulls me towards him. I follow him with a yell, leaping up the step and onto the wet marble top.

“That’s what I am hoping for.” He spins me round right into the path of one of the jets. I scream as the water soaks through my skirt and my blouse and hits my heated cheeks. It’s icy cold and all my senses jump alive from the shock.

“You little…” Just in time I remember we’re surrounded by kids so I refrain from calling him a nasty name. He laughs, grabs me around the waist and pulls me to him.

“I like you wet,” he whispers, wiping a strand of clinging hair from my face. My gaze stays locked with his and I nervously lick my top lip. He follows the action with the movement of his eyes and then the space between our mouths is only millimetres and suddenly he’s kissing me. 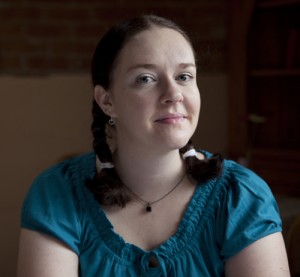 Exiting the Colosseo Metro station, Libby shot a grin at her boyfriend, Ciaran. “I don’t think we’ll have any trouble finding it, do you?”

“Hmm?” Ciaran frowned, then turned his gaze in the direction that Libby was pointing. He gave a sheepish smile. “No, I don’t think we will. Shall we put the map away?”

Libby nodded, and Ciaran spun round so she should take the map and load it into his backpack. Zipping it back up, she patted it twice to signal she was done. Ciaran turned and held out his hand. She took it, and together they took their lives in their hands crossing the busy Roman road and walked to the Colosseum.

Despite the early hour, the queue was already considerable, and the couple exchanged a wry look. But then Libby remembered something. “Hey, don’t look so glum babe. We can skip the queue, remember?”

Ciaran frowned. “We can?”

Pulling a small credit card shaped and sized item from her pocket, she replied, “Yes! Our Roma cards mean we can get in quicker. That was one of the selling points the rep kept going on about when she was trying to flog them to us.”

Me, you already know, so here’s just a touch of magic from book two of the Lakeland Heatwave Trilogy, Riding the Ether. 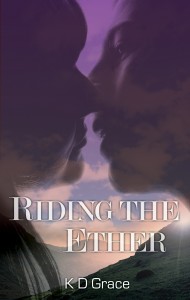 The therapist straightened in her chair and folded her hands together on top of her desk blotter like she was about to say a prayer. ‘Just get comfortable, Alice, like you normally do when you meditate. That’s it, just relax. Feet flat on the floor. Shoulders soft. Deep, even breaths. And when you’re ready, I want you to go to that place where you meet this man of your imagination, go there just as you are, relaxed, comfortable, unafraid. Go there and just be in that space and just …’

And she was. She was there, surround by, well, surrounded by nothing. Just empty space. How could there be just empty space? But it was alright. Empty space she could handle. Empty space was alright, as long as she was there alone. There was barely time for a mental sigh of relief before her blood chilled in her veins and it was as though a shadow had crossed over her consciousness. She couldn’t hear him, she couldn’t see him, but she knew. Dear Goddess, she knew! He was there.

‘I’ve missed you, my darling. Why have you stayed away so long?’ His voice was in her ear, like he was right behind her, no, more like he was inside her, right there with her. Her skin crawled, like it wanted to escape her flesh. Her throat ached with a scream it couldn’t quite form, a scream for help from Kate. Her nipples were suddenly painful, and she was wet. Oh dear Goddess, she was so wet and swollen. She whimpered desperately and tore at the fly of her trousers.

She clawed at her pentacle for comfort, but found none. He only chuckled softly. She could feel his voice deep in her chest making her nipples even harder. ‘But all of your suffering is over now, my beauty. I shall make you feel better, and that is what you want, isn’t it? You want me to make you feel better.’