If you like hot fairy tales, and who doesn’t, you’re in for a real treat today. Elizabeth Black is my guest, here to tell us all about her hot new version of Puss in Boots, Trouble in Thigh High Boots. Welcome, Elizabeth!

Authors like cats because they are such quiet, lovable, wise creatures, and cats like authors for the same reasons. – Robertson Davies

Perhaps it is because cats do not live by human patterns, do not fit themselves into prescribed behavior, that they are so united to creative people. – Andre Norton

Albert Schweitzer was wrong. There are more than two means of refuge from the miseries of life, and they aren’t only music and cats. The third is writing. I am a life-long cat lover, although I didn’t acquire any until I was in my mid-20s. I begged for a cat when I was a kid. The closest I ever came to having a cat were two hamsters and a salmonella turtle. Not exactly the cuddliest creatures on earth.

Four cats live with me in my apartment and they are my muses. They keep me calm when they are asleep and they provide endless hours of entertainment – and annoyance – when they are awake. One in particular – Lucky – likes to stand in front of my computer screen and stare at me until I stop writing and pet him. He can be a real pain in the ass. He’s also been known to collaborate with me. I’ll be in the middle of writing a soaring romantic scene (or a scary one, since I also write horror) when he’ll add his two cents, usually in the form of the same letter repeated fifty times because he steps on my keyboard and won’t get off.

Cats. Can’t live with them. Can’t eat them. 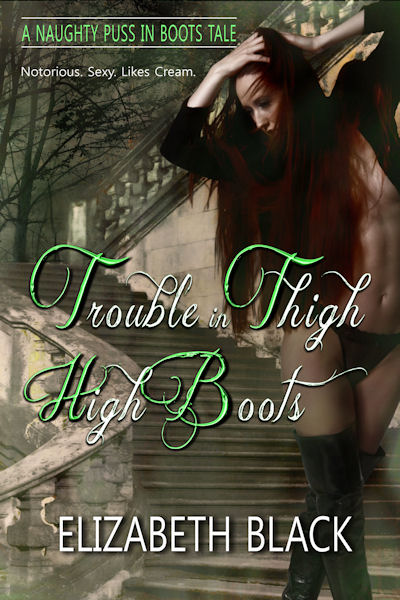 It was only natural I would choose a cat as a shapeshifter in “Trouble In Thigh High Boots”. This novella, which is an erotic retelling of Puss In Boots, stars Tita, a female feline shapeshifter. She shifts from the form of a sleek kitty into a gorgeous young woman. She has many of the same qualities as most cats. She is a connoissuer of comfort, as James Herriot would agree. Freud would be pleased to see that time with her is never wasted. She not only asks for what she wants (per Joseph Wood Krutch), she gets it. Although she has obtained shelter without confinement and love without penalties, she had to work for her food. W. L. George would say two out of three ain’t bad. She also expects to be worshipped as a goddess, which would please Terry Pratchett. And when she’s unhappy, Percy Bisshe Shelley would warn those around her that she’s just sitting there thinking up ways to get even. And in “Trouble In Thigh High Boots”, does she ever get even with her nemeses! You must read the book to find out how. And finally, Robert A. Heinlein, who was known for his love of cats, would agree that women and cats will do as they please. Tita is both rolled into one. Men and dogs should relax and get used to the idea.

And now, to end my post, here are a few more cat quotes:

No matter how much cats fight, there always seem to be plenty of kittens. – Abraham Lincoln

Cats are intended to teach us that not everything in nature has a purpose. – Garrison Keillor

We shall see that at which dogs howl in the dark, and that at which cats prick up their ears after midnight. – H. P. Lovecraft (the horror lover in me had to throw that one in)

Tita is a Puss In Boots with a little something extra. Being a magical creature, she shifts from a kitty into the form of an alluring, ginger-haired woman when the situation demands it. And what a situation she finds herself in! Her new master Dylan is a poor man who needs a boost in the world. Sly Tita uses her seductive wiles to pass him off to the villagers and the king as the Marquis of Carabas in order to help both of them gain their fortunes. Her plan is not without its problems. Dylan’s malicious brother, Zane, lusts after Tita, and he wants her all to himself, but she refuses to succumb to his treachery. Being a cat first and foremost, she purrs in the arms of her many lovers but her heart belongs to only one man – the king. She hopes that in ensuring Dylan his lofty place in the world the king finds a place in his heart for her. Her life becomes an erotic adventure in reaching her goals.

Her stiletto heels clicked on the hardwood floor, attracting the king’s attention. When he turned toward her, her heart nearly stopped at the unabashed thrilled look on his face when he set eyes on her. She sniffed the air and smelled castile soap and fragrant oil of rosemary. If I didn’t know better, I’d think he expected me. Maybe his knights told him I was on my way.

“Ah, cat, you have returned! How delightful!” The king’s jolly laugh boomed around the high-ceilinged room. “My sister told me she saw you on the road. Your rabbits were absolutely delicious. I saved a morsel in case you returned.”

She smiled and batted her lashes at him. Stop it! You’re acting like a peckish school girl with a bad crush! “You are too kind, Your Highness. Before I accept your gracious offer of food, might I offer you another present from the Marquis of Carabas?”

“Another present? Your Marquis is quite impressive. First, the fattest rabbits I’ve seen in these parts in a long time, and now more gifts! Yes, please, do show me what you have to offer.”

Oh, I’ll show you much more than you expect, sire. She lifted her knapsack and prepared to open it, but hesitated. The king looked dejected.

“I want this gift to be a special surprise for you, sire, but I can’t have you looking at me when I give it to you.”

“Well, what shall we do then?”

“I had an idea.” She opened the knapsack a tiny bit, reached inside, and pulled out a silk blindfold. “How about we play a game?”

He clapped his hands. “I love games! Cat, you are quite the adventuress!”

Little do you know… “I do my best, Your Highness.” She held the blindfold between her claws. “May I approach you and slip this over your eyes, sire?”

“Of course you may.”

“How do you know I won’t shield your eyes and then slit your throat?”

“Because there’s something special about you, cat. I can’t put my finger on it, but you are very intriguing. I’m willing to trust you with my life.”

Her heart melted at his words, and she took great pride in feeling his affection even though he had not yet seen her in her human form. What would he think of her once he saw her long legs, full breasts, and thick tawny hair? Would he ravish her when he felt the warmth from her heart and tasted the sweetness of her breath? How would he react to the tenderness she longed to give him?

When would he remember her, if he remembered her at all? She had never spoken to him or shifted in front of him when she lived in the castle. Her heart ached with love and memories of his tender caresses and playful roughhousing. If only he recalled her!

She walked to him as he sat in his favorite chair, and then she leapt onto his lap. He ran his fingers through her long fur without thinking twice about it, as many humans did when accosted by a cat, although certainly not most. She had met her share of men and women who beat her and threw pans of water at her. Zane’s face flashed into her mind. When would she see him again? Tita knew he would make another appearance soon, aware of his cruelty and greed. She shook her head and quickly shoved his memory away. She would not allow him room in her head to ruin her time with the king.

Thankfully, her king was not cruel. She purred with pleasure as he scratched her behind her ears. Ooooh, he found my most sensitive sweet spot! I can’t stand it! Let me at him! In a fit of arousal, she rubbed her mouth against his hand, leaving her scent on his skin.

She stared into his deep blue eyes and paused before lifting her blindfold. I wonder if he can see into my soul when he gazes into my eyes. One look will show him a world he’s never before seen. She gazed at him, wishing he could read her mind, to sense the love she felt for him.

“You have lovely eyes, cat. The color of a deep sea – quiet on the surface, but I suspect there is quite a bit of turmoil in those depths.” He ran one hand over her back, stroking her length until she arched in response. “Your eyes are very human. Long-lashed and expressive. Are you enchanted?”

“Let me show you.” She slipped the blindfold over his eyes and waited for him to sit back and relax. When his breathing eased, she curled into his lap, placing both paws on his shoulders. “Don’t be afraid. And whatever you do, don’t remove the blindfold. I’m about to give you my surprise.”

As her body lengthened and stretched, she stroked his hair. Paws elongated into palms and fingers and she scratched his scalp with her long nails. He moaned and curled his head into her embrace, but as her furry body grew into curvy feminine form, he backed away with a gasp of alarm.

“Please don’t be afraid,” she whispered in a deep, mellow voice that sang in his ear. “I won’t hurt you.” She guided his hands from his sides to her bare hips. “Touch me. Feel me.”

Just Who is Behind the Smut and Magic ? → ← It’s No Secret! The Secret Life of Pets is Free!