IS Kay Jaybee The Collector?

It’s been almost five years since I wrote my linked anthology-style novel, The Collector, and almost four years since it was published. With the recent release of this, my very first solo full length piece, as an e-book, I’ve found myself looking back to its origins; to one early morning sat in a crowded coffee shop at Heathrow airport, talking to a very dear friend on the phone, while awaiting a flight.

It was due to that brief conversation that, not only was the idea for The Collector conceived, but that I privately made the decision to stay in the world of erotica writing, and not branch out to try my luck with other genres.

At the time of The Collector’s arrival as a paperback in August 2008, I’d already had a fair number of short stories published, and was bursting with plenty of ideas for new ones. However, I wanted to write something longer; something that was as long as a novel, but that had the variety of an anthology.

So, as I was saying, there I was sat sipping coffee at the airport when my friend called me. All he said down the phone was ‘go buy The Observer.’ Curious, I did just that, and there, between a front cover shot of Joan Collins, and a back cover advert for new encyclopaedia’s, was an article all about female erotica writers.

Now this was even more of a hidden world then, and as I read I knew I wanted to stay part of it, and even dreamed that one day I’d be in such an article- without really believing that would ever really happen!

Enthused with new zip and a determination to be every bit as successful as those brave women revealing their secret writing persona’s to the press, I extracted my ever ready notebook from my bag, and began to look at the people around me. I wanted to write- but where to start? As I watched the ever moving crowd, I began to wonder what each individual would want me to write for them. What would their fantasies be? What kinky secrets of their own would they share given half the chance?

It was from these musings that the idea for The Collector was born. A book of stories ‘collected’ by a woman in pursuit of as many sexual

exploits as she could. And what better way to start, than to combine my own dream to one day be a successful writer of erotica, and the fantasy of one of my other friends, who (like so many others, be they male or female) visualises being picked up by a beautiful intelligent woman for sex in a no strings attached way. This story became, New Territory, the first of the 22 stories within The Collector; a tale which had been completely drafted by the time my plane reached its destination.

I knew it would be a gamble including the very short tales- as they either really appeal, or really frustrate- but on the whole the feedback from my reader’s has been good. It would also be true to say, the shorter stories were much harder to write than the longer ones, but were a lot of fun to construct around the fantasy’s I gleaned from my sources of research.

So- how much of The Collector did I really collect? Well- that would be telling, but if I haven’t thanked my sources of inspiration already, then I do now!

Dispelling the myth that only dominant whip wielding women write and enjoy erotica, the Collector records a wide variety of sexual encounters whilst she travels the country. 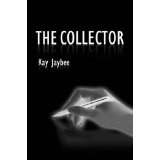 It hadn’t seemed significant when he’d noticed which page she’d left the colour supplement open at. Perhaps it wasn’t; coincidences happened all the time. No. He saw now that it was no accident; she had been trying to tell him something.

She was sat at the corner table at the very back of the coffee shop. The armchairs were rather comfortable in that area; he always tried to sit there. As he worked his way along the queue, collecting an almond danish and ordering a frighteningly large black coffee he watched her. Sitting slightly upright, she was partially obscured by a copy of The Observer, her long booted legs curled under the armchair, her red hair framing her small face. She was sipping a cappuccino. He couldn’t help but smile as he watched her develop a foam moustache, and quite uncaring, lick it off with her tongue. He looked away and concentrated on his tray as he pushed towards the till. It was disconcerting to find himself aroused by such a simple act. He paid, collected his sugar and turned to find a seat.

He could have sat anywhere, but she already felt like an itch needing a scratch. He had to talk to her. So what if she told him to piss off, he was only going to ask if he could share the table.

He asked and she inclined her head, not glancing up for more than a second; so he sat. This was new territory for him; he’d never felt such a need to say something, anything. He was the good looking one; the one who never had to say anything. They came to him.  Now the silence seemed to be an oppressive presence in itself, like a whole extra person in the room who wasn’t saying anything.

This was ridiculous. He picked up his own paper, folded it to the business pages and took a bite of his pastry, trying not to mind that icing sugar was dusting his new black jacket.She’d finished her drink. He flirted with the idea of offering to buy her a new one, but quickly dismissed it. He hadn’t even said hello to her. So why did he feel that time was running out? Why did he feel a strange sensation of panic that she was going to leave before he’d heard her voice?

As she unfolded her legs and tided her papers she picked up her large brown rucksack, pulled out some keys and stood in front of him. He looked up into her face. He was being assessed. It was a strange sensation; he usually did the assessing.

‘Are you coming then?’ She spoke very softly, her green eyes shining with a sort of inner power.He was about to ask if she was sure, but she’d already turned around and was heading for the door.

He was well aware of the fact that he was probably about to make a total fool of himself, but he followed anyway. She walked very quickly; striding along in impossibly high heels. It hadn’t occurred to him until that point that she might be a hooker. What if she was? He’d just walk away. Maybe?

He followed as she turned down a gap between two shops. There was a flight of black iron stairs that led up to a flat above one of them. She stopped. ‘Two things,’ she undid her leather jacket as she spoke, hitching her scarf open to reveal a delicate neck completely unadorned by jewellery, ‘one; I do not do this for money, and two; I am not inviting you in for coffee.’

He nodded, undid his own coat, and followed her up the stepsThe hall was very narrow; it led into a modest kitchen diner, where she placed her paper open the table. Sorting out the magazine, she opened it up as if she was going to settle down to read, but then didn’t.

He hadn’t got as far as making small talk. In fact he hadn’t even got as far as attempting to make small talk, when she took him by the hand and led him into the small living room, sitting him down on the small cream sofa. She knelt and, placing a restraining hand on his leg, undid his shoes and placed them neatly to one side. Then she did the same with his socks. ‘I don’t like naked in socks.’That was when his body stopped making his hands clammy and his heart beat faster, and sent all excess blood directly to his dick. He’d known he’d been half way to a hard-on already, but now there was no disguising the fact.

‘You would be a Coldplay man, or maybe Keane? Dido?’ She stood by the tiny stereo.

She nodded, pressed buttons and waited as the haunting notes built up to the opening number.

He should do something. He tried to stand, but she just raised her hand, and he quickly sat down again. Maybe this wasn’t his show; new territory.

She was standing about two metres away from him. Her jacket had already hit the floor, and he caught his breath as he watched her long slim fingers begin to undo the buttons of her white blouse. She looked straight at him the whole time; each movement was in time to the music, and he found himself wishing that he’d chosen something with a faster pace.

His throat felt dry as she revealed a beautiful cream bra. He could see her nipples, hard and dark, pressing against the thin lace. He started to wonder how wet she would be, and then stopped himself; if he started to think like that he’d shoot his load before he even got his trousers off; if that was her intention. He’d never felt so unsure of himself as she stepped out of her suede skirt, letting it drop over her boots.

Now he desperately wanted to touch. The smooth shoulders that had just been revealed cried out to be caressed. Anyway, he was becoming uncomfortable; his cock was digging into his waistband, as it struggled to force itself from his jeans unaided. He should say something, but he didn’t want to break the spell.

She stopped. He stared at the floor by her feet and worked his eyes slowly upwards. He tried to imprint the vision before him onto his brain inch by inch. High heeled boots; beige. Soft pale flesh emerging from lace hold ups; cream. Slightly see-through French knickers; cream. ‘Keep going; try to drag your eyes away from the neat silhouetted triangle your eyes can just make out’, he thought to himself as he swallowed, continuing his inventory. A flat stomach with a neat belly button. A cream lace bra encasing neatly rounded breasts which poked tantalisingly over the top. He took a deep breath and looked at her face. Small features, bobbed red hair, deep green eyes which gave absolutely nothing away.

The room was charged with electricity; so enticing, so dangerous. She moved forward and gestured for him to stand. He hadn’t been able to suppress his groan as he stood. His stomach felt strange and his dick ached to be free from its confinement.

He waited, doing nothing. He didn’t know what to do, so he let her take control; keep control. She took his belt first; pulling it out very slowly, loop by loop. She smoothed the brown leather between her fingers. ‘I like belts’. That was all she said, but he suddenly realised that he wanted to hit her with it. He needed to yank down her knickers and punish her for being perfect.

The Collector was published by Austin & Macauley as a paperback in 2008, and as an e-book in March 2012.

It is available direct from the publisher, from Amazon, Sh Women’s Store’s, and all good paperback and e-book suppliers.

7 Responses to “IS Kay Jaybee The Collector?”